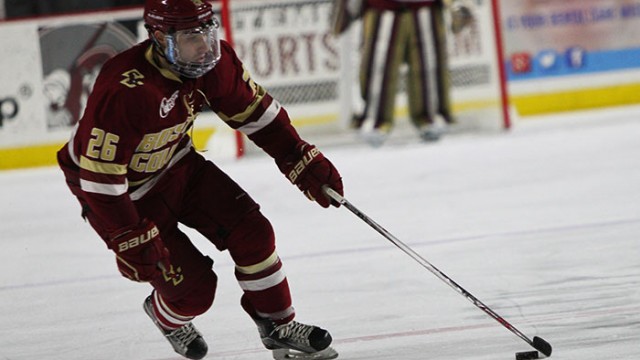 If you take a look at the standings in the Hockey East, Boston College men’s hockey is in first place. But it wasn’t always that way.

4-3 and 4-0—two different scores, two different results, and two different points in the 2015-16 season for No. 5 BC (17-4-4, 10-1-4 Hockey East) and the No. 10 University of Notre Dame (14-5-7, 10-2-2). At the first meeting between the two at Kelley Rink on Dec. 10, the Eagles had injured teammates, offensive lethargy, and an inability to keep a third-period lead. The Fighting Irish gave the Eagles their first loss in 13 games, sparking a three-game losing streak for BC while bolstering a 12-game unbeaten streak for themselves.

Turn the clock ahead to 2016, on Jan. 29 in South Bend, Ind. The Eagles’ losing streak is long over—they took three out of a possible four points from two Hockey East rivals, Providence and Boston University, in the last few weeks. After getting banged up, defensemen Casey Fitzgerald and Steve Santini were back in the lineup, without any extended time missed.

Santini skated down the ice after the first faceoff, hurtling a shot toward Notre Dame goalie Cal Petersen, which ended up rebounding off a Notre Dame skater behind the net. Austin Cangelosi collected the puck and backhanded it, which scooted just past Petersen positioned next to the right post. In the first 16 seconds of the game, BC had the lead.

What a difference a healthy lineup makes to keep a rivalry alive.

BC went on to score three more goals, one in the first period and two in the second. Notre Dame never answered, with the score of the game ending at 4-0, giving Thatcher Demko his eighth shutout of the year. That tied him with current New Jersey Devils goalie Cory Schneider for the program record for shutouts in a single season.

From the early Cangelosi goal onward, it was evident that the Eagles’ offense was clicking. BC set the fast pace for the game, capitalizing on turnovers by the Irish and generating momentum up the ice. This, in combination with Demko’s adaptability in the net, gave the Irish trouble. In the penalty kill resulting from the hooking call on Michael Kim at 10:19 into the period, Demko was there to block and save the puck. After the penalty expired, Colin White got possession of the puck and sprinted down the right side of the ice, ultimately causing Petersen to lunge into a split in an attempt to save it. Petersen was unsuccessful.

The Eagles soared into the second period up by two goals, and the Irish were desperate for one. But Notre Dame’s offensive efforts led to a penalty on Dennis Gilbert for slashing at 6:49 into the period. While the Irish killed the penalty, they struggled with their attempts to score, falling farther behind the Eagles with less than six minutes left in the second. Thanks to Adam Gilmour, BC was with a three-goal lead, much to the visible frustration of Petersen, who slammed his stick on the crossbar.

After penalties called for too many men on the ice and high sticking, BC found itself playing 5-on-3 hockey with less than three minutes left in the second. During the power play, Alex Tuch dished the puck across the front of the crease to Zach Sanford, who swiftly netted it. The game was slipping away from the Irish.

On the penalty kill with several seconds left in the second, White generated a shorthanded chance for BC, drawing a slashing penalty on Jordan Gross. White was also given a penalty shot, but he couldn’t net the puck as he had in the first period. NBC Sports Network’s live stream, however, did not show the shot, instead cutting away to a commercial about Notre Dame students playing with robots.

The Irish’s frustrations came to a boil in the third period, and the Eagles did not stand back and watch. There was lots of traffic in front of the net, which often ended in pushing and scuffles after the whistle. Demko responded to the pressure, and although he wasn’t always positioned perfectly, he fluidly moved in reaction to shots on net.

BC killed penalties on Scott Savage, White, and Tuch, and Notre Dame killed penalties on Sam Herr and Jordan Gross, but the Irish’s penalties brought them even further from scoring, preventing them from generating any offensive energy or momentum. Notre Dame’s muddled offense and BC’s rejuvenated lineup and solid goaltending prevented any attempts for a comeback for the Irish.

BC is a different team from the last time it faced the Irish. It has held its own against higher-ranked teams and has climbed its way to the top of the Hockey East. The Eagles, however, have another hurdle: the Beanpot. And all the teams in the tournament will come into it in the same position as the Eagles—red-hot.