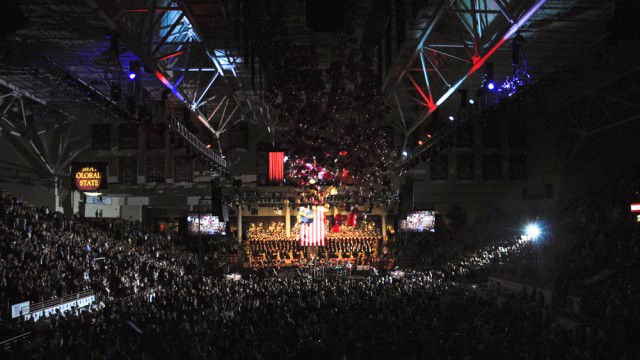 The campaign is part of a cycle at BC, which consists of creating a new planning committee to understand where the University is performing well and where it is lacking, and then hosting a fundraising campaign to support the changes that the University needs to make, Provost and Dean of Faculties David Quigley said. From 2003 to 2007, the University Assessment and Programming Initiative (UAPI) conducted research at BC. Based on those findings, the University launched the Light the World campaign, which raised $1.5 billion.

Though the University just announced that Light the World had reached its goal, the money has already been spent on improvements at BC, including the building of Stokes Hall and the hiring of 100 faculty members, Quigley explained.

“As a result of that earlier experience, I’m entering into this with a sense of trying to build on that success while aiming to get more people to the table with that sense that by working together we can build something even greater.”

USPI will conduct internal analyses of all eight schools at BC, gather information and ideas from BC community members, and identify specific areas where BC should focus. It hopes to create a strategic plan for the University’s Board of Trustees to review within the next 18 to 24 months.

“The process is just getting started,” Quigley said.

The creation of the committee began in December, according to University Spokesman Jack Dunn, when members of USPI met in December at an orientation session to define what their goals would be and how the program would work.

USPI’s ultimate goal, Quigley said, is to understand how the University has changed over the past 10 years since the last committee completed its analysis. They will look at the present strengths and weaknesses of BC and plan where they want BC to be 10 years from now.

The co-chairs’ roles, Lochhead explained, are to provide coordination and structure to the committee.

“After consultation, Father Leahy made the final decision on the steering committee composition,” Lochhead said. “He asked David and I to provide the leadership and structure and to make sure that when we get together as a committee that we’re having the right conversations, that we’re looking at the right data, that we’re engaging the right people outside of the steering committee, and making sure that we can get to an in-depth level of assessment and planning going forward.”

To decide which students and faculty would serve on the committee, they looked at the previous strategic planning processes, including the UAPI, which ran from 2003 until 2007.

“I’d say we really did strive for balance on the steering committee so that we could have representation across the schools, include students in the process, and ensure that we had some balance with respect to gender” Lochhead said. “We wanted to make sure that we had a team that could represent the University’s interests well and ensure that we maintained an institutional view as opposed to a secular or departmental unit view.”

The Steering Committee will begin in February with an assessment of all eight schools on campus and all of the vice presidential administrative areas to evaluate progress made over the past 10 years and identify strategic opportunities. The group will also examine University-wide initiatives.

“BC has long benefitted from a particularly thoughtful commitment to planning and periodically bringing the community together to discuss our concerns, our hopes, our ambitions,” Quigley said. “Mike Lochhead and I are working together to structure a process that will both be inclusive and at the same time focused and productive.”

Leahy, along with the Board of Trustees and senior leaders on campus, decided that 2016 was the right time to begin the next planning process, Quigley said.

“The world has changed,” Lochhead said. “In the last 10 years we’ve made a lot of progress but also need to take stock of what is happening in the world of higher education. Where does BC sit within that world presently and has anything changed in our set of assumptions that we think we need to address? Building off of the direction that was set 10 years ago and the initiatives that emanated from that work is certainly where we are starting from in our assessment and planning work.”

And while the committee will look back at the history of previous campaigns—like the University Academic Planning Council, which concluded its research in 1996—it will also look forward to see how the University can improve.

“If you look at BC’s history over the last 40 years, there is a cyclical nature to institutional planning efforts,” Quigley said.

There will also be some differences with this new committee, Quigley said. BC currently has much better data-collecting measures, he said, which allows the institution to better understand the realities of the campus.

Dunn and his team, as well as The Chronicle and the News and Public Affairs Office, will also work to keep the community updated over the course of the next 24 months, Quigley said, using a portal on the BC website.

There will be no major breaks from what BC has done in the past, Quigley said, but USPI will work toward understanding how to build on the prior successes of the University and what needs to be improved.

“The committee is coming together to provide high-level oversight for a process—a process of engagement and assessment and some real consideration and thought about where BC wants to be in 10, 15, or 20 years from now. We need to marry all of those things together in a way that allows us to develop initiatives that address what we may identify as gaps or opportunities in order to propel BC forward and put it in the best position possible for the next 10 years.”

It is important that the committee understands what BC values as a community right now, Quigley said.

“There are certain fundamentals to this place, to our culture, to our values, to how we come together as a community that I would not want to lose,” he said. “And I think going forward we need to think about how do we preserve those?”

It is also important, however, to avoid complacency, Quigley said. The committee must contemplate what it wants BC to look like in 10 years and how BC can evolve as an institution.

“BC has a strong tradition of excellence in academics and also a commitment to social justice, both within our Boston community and globally,” Aimee Milliken, a graduate student in the Connell School of Nursing and member of the steering committee, said. “I hope that we can succeed in developing a strategic plan that continues to highlight both of these priorities, and that can serve as a model for other institutions.”

Quigley served on the UAPI committee in 2004 as a history professor in the Morrissey College of Arts and Sciences.

“I think that the opportunity the last planning process afforded many of us to engage with colleagues across departments and across the University opened up for me the idea that by working together, by putting our best selves forward, that we can actually take a sense of individual and collective responsibility for building a better BC,” he said. “As a result of that earlier experience, I’m entering into this with a sense of trying to build on that success while aiming to get more people to the table with that sense that by working together we can build something even greater.”