Home » Previewing BC Women’s Hockey: What to Expect in the First Round of the Beanpot 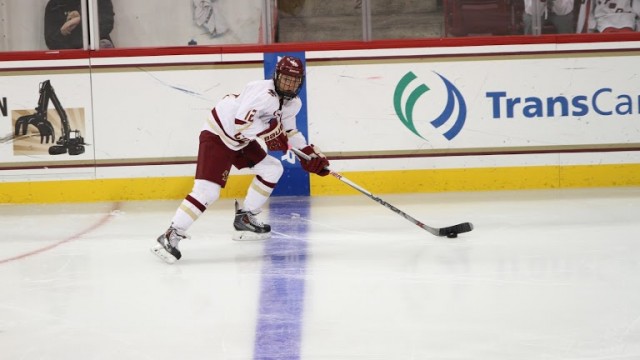 Previewing BC Women’s Hockey: What to Expect in the First Round of the Beanpot

Tuesday, Feb. 2, 2016, otherwise known as Groundhog Day, is a very important day. Bostonians will learn whether this unexpectedly mild winter will end early or be extended by six weeks. But for BC women’s hockey fans, Feb. 2 is significant for another reason—the undefeated Eagles (27-0-0, 19-0-0 Hockey East) and Harvard’s Crimson (12-8-1, 9-6-1 ECAC) will square off at Boston University’s Walter Brown Arena for a highly charged Beanpot semifinal game.

A lot of history will hit the ice along with both squads when the puck drops on Tuesday at 5 p.m. On March 21, 2015, Harvard defeated BC 2-1 in the Frozen Four semifinal game. (Harvard would go on to lose the national championship game to the University of Minnesota.) Since that day, the Eagles have lost exactly zero games leading up to this next installment of the competitive BC-Harvard rivalry. In the years since the rivalry’s 1996 birth, the Crimson have won 25 times, the Eagles have won 11 times, and the teams have tied once. BC has dominated for the past decade, going 10-4-1.

The undefeated Eagles are ranked No. 1 according to the PairWise and the USCHO.com poll. By contrast, the Crimson are No. 10 in the PairWise and were not ranked by USCHO.com, although they did receive eight votes. BC is coming off a 4-1 victory over Merrimack College, while Harvard enters the game fresh off a 4-1 win over Princeton University.

Last Time They Played: Earlier this season, the two teams met at Harvard’s Bright-Landry Hockey Center, where BC pulled out a 2-0 victory in another chapter of the electrifying rivalry.  Halfway through the first period, Meghan Grieves poked a deflection past Harvard’s goaltender Emerance Maschmeyer to give the Eagles a 1-0 lead. At the end of the second period, Grieves backhanded another shot past Maschmeyer to brace the lead. Both teams tested the opposing netminder, with the Crimson firing 29 shots on Katie Burt and the Eagles managing 38 shots on Maschmeyer. Burt allowed nothing to pass her and recorded her ninth shutout of the season.

Keys to the Game

Northeastern: What happens when an unstoppable force meets an immovable object? BC and Northeastern fans might discover the answer if the two programs meet in the Beanpot final, which could pit Husky forward Kendall Coyne against Eagles goaltender Katie Burt. To give an idea of how good Coyne has been this season, consider this: Carpenter, who may be the best women’s hockey player of our generation, has 61 points for the Eagles this year. Coyne has 64, the nation’s best mark. Northeastern’s Olympic star has totaled 36 goals and 28 assists to date, carrying the No. 6 Huskies to a 22-4-1 record (two of the four losses have come against BC), including 12 straight wins heading into the tournament. Seriously, this woman hates to lose.

But Coyne does have help on the ice, namely sophomore forward Denisa Krizova, whose 31 assists are good for second-best in the country. Krizova leads a notable sophomore class that features five players with double-digit point totals for the Huskies. This team is young, hungry, and playing its best hockey of the year entering the Beanpot on Tuesday. Coyne and Krizova have lit a fire under Northeastern over the past month, spurring an undefeated January and the 12-game win streak which is the longest in program history heading into the Beanpot. The Huskies’ 23 wins before the Beanpot also ties a school record. If this offense can be as effective in February as it was in January, then expect a shootout at Walter Brown Arena.

Boston University: The Terriers are the underdogs in the 2016 Beanpot Tournament, which says a lot about the competition considering BU is ranked 12th in the PairWise rankings. Despite their national recognition, the Terriers have struggled against Boston schools, losing all four games this season against local rivals BC and Northeastern. The loss against Beanpot semifinal opponent Northeastern was particularly unsettling for BU fans. The Huskies skated circles around an outmatched Terrier lineup that allowed seven goals in a 7-1 rout. And while blame shouldn’t be placed on any single player, one number that is particularly alarming is sophomore netminder Erin O’Neil’s 52 goals allowed—nearly 3 per game. O’Neil and her defense’s weaknesses may be exposed against the kind of electric offenses that will be present in this year’s Beanpot.
On the offensive end, watch out for Rebecca Leslie’s keen passing ability (28 assists) and Victoria Bach’s knack for finishing around the net (17 goals). Leslie and Bach, sophomores, are two of the younger members of an experienced group that, unlike their Boston rivals, doesn’t have a star player that the team can point to. Rather, BU relies on its well-roundedness up and down the roster to be successful. The Terriers put their depth on full display against the Eagles in the rivals’ last meeting in January, when BC barely squeaked past BU in a 4-3 comeback win. That same team that played the nation’s No. 1 to a virtual deadlock will be back again tomorrow night on its own ice, and the Terriers will be looking for revenge like seemingly every other team in this tournament.

alex carpenter haley skarupa katie burt emerance maschmeyer beanpot 2016 Miye D'Oench
I Changed My Mind, Pay Them Their Damn Money
Previewing BC Men’s Hockey: What to Expect in the First Round of the Beanpot