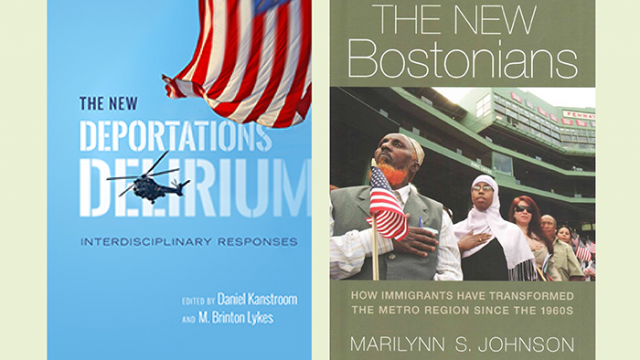 BC Faculty Publish New Writings on Immigration Policy and Reform

Two new books written by Boston College faculty about immigration were released at a book launch last month hosted by the Center for Human Rights and International Justice (CHRIJ). The New Bostonians: How Immigrants Have Transformed the Metro Area Since The 1960s, written by history professor Marilynn Johnson, and The New Deportations Delirium: Interdisciplinary Responses, co-edited by LSOE professor M. Brinton Lykes and BC Law professor Daniel Kanstroom, explore different facets of life as an immigrant in the United States and in the Boston area.

Johnson’s book looks at how large-scale immigration from Latin America, Asia, and Africa after the passage of the Immigration Act of 1965 helped revitalize the city.

Johnson is a social and urban historian of the modern U.S. and has been teaching at BC for 21 years. Nearly all of her research and books are about the history of cities and urban life, including that of Oakland, New York, and Boston. Immigration in particular has been a consistent theme.

Johnson is not formally affiliated with the CHRIJ but is a fan of its work, particularly since she studies both violence and migration—two themes she said are “very much linked in history.”

That being said, Johnson claims her book is “rather different” from Lykes and Kanstroom’s. Instead of examining recent policy debates and immigration enforcement practices, Johnson’s work explores the rise of immigrant rights in response to constantly changing immigration legislation. This novel perspective provides a closer look at how deportation policies have broadly affected both authorized and unauthorized immigrants.

“Mine seeks to tell the story of new immigrants in Boston since the 1960s and how vital they’ve been to our workforce, economy, and the revitalization of the city since the 1980s,” Johnson said. “This is where The New Deportations Delirium picks up and stakes out new ground … In short, the two books complement each other nicely.”

The New Deportations Delirium: Interdisciplinary Responses, co-edited by CHRIJ associate directors Daniel Kanstroom and Lykes, takes a look at the impact of the 1996 Illegal Immigration Reform and Responsibility Act on the country’s immigrant population.

According to the NYU Press, millions of migrants to the US, including many long-time residents with green cards, have experienced summary arrest, incarceration without bail, transfer to remote detention facilities, and deportation without counsel—a lifetime banishment from what is, in many cases, the only country they have ever known—since immigration laws were hardened in 1996.

Lykes is a community-cultural psychologist with more than 25 years experience working in Guatemala, and Kanstroom is an immigration attorney who currently focuses primarily on detention and deportation issues and teaches human rights law. Both authors are associate directors of the CHRIJ and founding members.

“We at the CHRIJ were delighted to co-host the book presentations with [Dr. Johnson] as her book looks at the multiple contributions of migrants to the greater Boston area, whereas ours looks more closely at what happens to migrants who enter the area without proper documentation and are most directly affected by current immigrant policies and practices,” Lykes said.

In doing so, she managed to document the social, educational and economic contributions of immigrants to Boston’s economic recovery. This includes the contributions of many who are not authorized, and explores “push factors” driving immigrants from Central America to the U.S. and to this area.

According to Lykes, her and Kanstroom’s volume is interdisciplinary, “as we at the CHRIJ are convinced that without collaborations among lawyers, social science researchers, practitioners—psychologists and social workers, and judges and attorneys in particular—activists and advocates, and people in the media—in this case, a filmmaker—we will not be able to create a better life for migrants and for those of us in receiving communities and a more just and comprehensive immigration policy that reflects our better values—and international human rights norms.”

​​The Center has partnered with community-based organizations in the Boston area looking to collaborate on an interdisciplinary and transnational project.

This project would bring together Central American immigrant members of the organization, staff organizers from the group, lawyers, and other professionals in order to document how the recent surge of immigration enforcement is affecting immigrants and their families and communities.

BC faculty and students associated with the project come from diverse academic and vocational backgrounds, including backgrounds in the fields of law, psychology, action research methodologies, and social work.