Orobator is the president of the Hekima College Jesuit School of Theology and the Institute of Peace Studies and International Relations in Nairobi, Kenya, as well the former Jesuit provincial of East Africa, where he headed the Society’s operations in Kenya, Ethiopia, Uganda, Tanzania, South Sudan, and Sudan.

“You can take an African out of African religion, but you can’t take African religion out of an African,” Orobator said, highlighting what he thinks is the defining characteristic of religious heritage on the continent. “African religion is the deep anchor that secures the foundation of Christianity or Islam in the soul of the converted African.”

Last week, Orobator delivered the first part of the lecture, which focused on general religiosity in Africa, including its high historical rate of conversion to Islam and Christianity. He continued that thread this week, cautioning that any conversion statistics should be taken with a grain of salt, rather than simply praised as Pope Benedict XVI did in a 2009 speech. He laid out a couple of reasons.

First, statistics on religious conversion generally understate the influence of traditional African religion. Orobator even argued that “traditional” is not an accurate description, because it carries a connotation of irrelevance, while African religion is actually firmly established not only on the continent, but also in places like Brazil and Cuba.

Second, conversion to Christianity or Islam can cause some problems, considering that terrorist groups claim both religions as justification for violent attacks—Boko Haram in Nigeria and the Christian Anti-balaka militias in the Central African Republic, as well as pockets of al-Shabaab in East Africa and Al-Qaeda in North Africa and the Sahel.

Religious conflict in Africa has historical roots in tribal disputes, efforts by Muslims to establish political and economic dominance in North Africa, and missionary activity by Christians.

According to Orobator, it is important to remember that Muhammad was both a prophet and a statesman, and that early followers of Islam were heavily focused on nation-building. He also cited Chinua Achebe’s novel Things Fall Apart, which is partially about Christian missionaries in late-19th-century Nigeria, as an example of the tensions caused by Christianity in Africa.

The current religious conflicts in Africa are not unprecedented, but their severity and extremism is thought to be worsening.

Exacerbating that worsening, he added, is that Africa, with its relative political and economic instability, is especially vulnerable to religious fundamentalism. In addition to the other terrorist groups operating around the continent, Orobator mentioned Joseph Kony’s Lord’s Resistance Army, an East African rebel group that cites Christianity as its inspiration and is accused of human rights violations like child abduction and slavery. Capturing and prosecuting Kony was the subject of the viral Kony 2012 film and failed campaign run by the advocacy group Invisible Children, Inc.

As a response to Africa’s growing religious fundamentalism, Orobator suggested that traditional African religion can be a moderating force.

“African religion is a bulwark against extremist attempts to dissolve the essence of religion in a pool of sectarianism and hypocrisy,” he said. “The authentic spirituality of this continent is a repository of experiences for the renewal of humanity.”

Featured Image by Sarah Hodgens / For The Heights 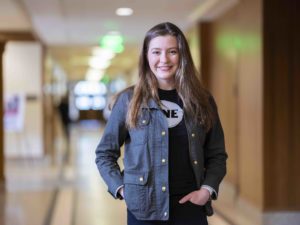