Home » At Chelsea Theatre, an Opportunity For Local Youth to Act, Learn 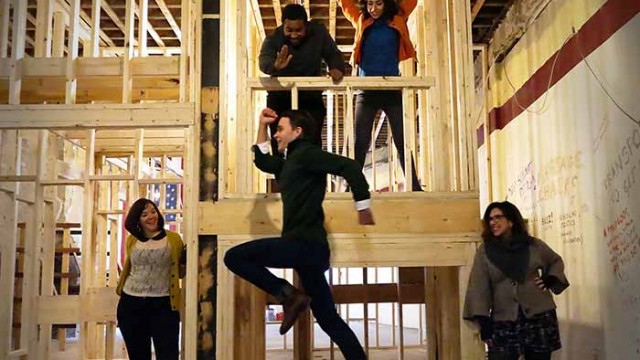 At Chelsea Theatre, an Opportunity For Local Youth to Act, Learn

By this August, Chelsea Theatre Works will open new doors to the youth population of Chelsea, Mass.

In the summer of 2014, Trip Venturella and his colleagues noticed that the Factory Theatre, which housed several small theatre companies, had closed down, leaving many theatre companies without a home to perform in. They decided that their company, Apollonaire, should open its arms and welcome them inside to a co-working black box theatre.

This plan will allow children from the ages of eight to 18 from Chelsea and its neighboring communities of East Boston, Revere, Winthrop, Cambridge and downtown Boston to act on stage, Venturella said.

“We kind of looked around and said ‘there really is no place where young people can do art,’ so we are building a home for that in Chelsea,” he said.

Venturella is looking to help talented, motivated, excited kids who would start in the program with classes, but eventually progress to producing shows, interning with their companies, and move onto higher education. Many of the students who will be attending come from the lower-income Hispanic community of Chelsea.

“We welcome anybody who is motivated, but [the students] tend to be the bilingual kids from the Chelsea area,” Venturella said.

Lynch School of Education professor Julia Whitcavitch-DeVoy believes theatre changes the lives of many, having seen it in scholarly journals as well as in her own children. It enhances one’s communication skills and overall development, she said.

“It creates a context where you need to work together with one or more people, so there’s that social development piece,” Whitcavitch-DeVoy said. “I think for most people who are involved there’s an emotional development as well because as you progress through the programming, you feel more confident in your abilities.”

Venturella agreed, noting that there are studies that demonstrate that theatre has an impact on not only the artistic part of the child, but also from an academic and social standpoint.

“It helps improve high school graduation rates and how many kids go onto higher education,” he said. “It’s very much a positive force in the kids’ lives,” he said.

Kate Weidenman, LSOE ’16, who also majors in theatre, believes that theatre has an impact on anyone, but particularly those who are willing to be vulnerable and impressionable. It enhances self-confidence, self-concept, and self-presentation, she said.

Weidenman then points to the parallel between play and learning, and the close proximity of the theatre to the students’ neighborhoods as key. She believes kids will be much more willing to attend without having to travel far away.

“Theatre also allows its participants to make mistakes,” she said. “I think these factors distinguish theatre from just another extracurricular because you are not simply trying to ‘win’ or even trying to learn a new skill, you are creating a version of yourself and attempting to give it away to people who want you to succeed.”

Whitcavitch-DeVoy added that giving students an improved space has a large impact on the students’ self-worth.

“I think theatre gives you some tools to say, ‘Yes, you do have that opportunity and you do have that potential,’” she said. “So I think it’s particularly important where there’s low-income and some economic challenges and demoralization.”

One of the main upsides of the project is having a theatre of their own, said Venturella, by making the children feel more comfortable in the space and feel at home. Currently, he and his colleagues are “neck deep” in the expansion project, which they hope to have open for the 2016-2017 season that begins in August, and they are very excited to broaden their impact on the Chelsea youth.

development Theaters Youth
From Sydney to Boston: Learning to Embrace the City Around Me
CliqBit: A New App That Creates a Social Media Haven, Founders Say