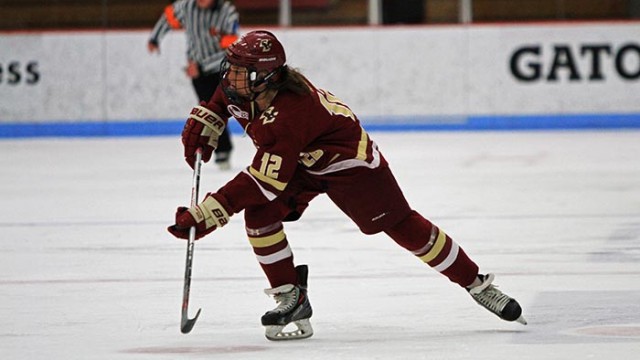 Boston College women’s hockey took a break from its typically dominant victories Saturday afternoon, instead turning in a lackluster performance against the University of Connecticut. After winning in an 8-0 shutout against Harvard University in the opening round of the Beanpot, the Eagles (29-0-0, 20-0-0 Hockey East) narrowly defeated the Huskies (11-13-5, 7-9-3), 5-4. The win was one of the team’s hardest-earned of the season, as UConn answered back at nearly every turn.

BC gained momentum shortly after the game began, scoring its first goal five minutes in. Alex Carpenter collaborated on a line effort, with Haley Skarupa and Megan Keller assisting her, as she shot past goalie Elaine Chuli.

The Huskies claimed the rest of the period as their own, putting a shot past goalie Katie Burt. After Burt caught a shot by a UConn forward, she couldn’t keep hold of it and let it slip, allowing Theresa Knutson to sneak the puck in. The Huskies continued their offensive onslaught early in the second period, opening it up and putting the Eagles behind them.

The UConn lead, only the third time that BC has been behind during a game this season, did not last long. Less than two minutes later, Dana Trivigno took advantage of a power play and finished off a shot that Lexi Bender placed near the goal.

BC capitalized on another power play right after the last goal, when Carpenter earned her second of the afternoon, with help from Megan Keller and Kenzie Kent. The lead silenced the Huskies for the remainder of the period.

UConn regained power toward the middle of the third period, tying it up yet again with a forceful high shot from Jessica Stott. The tie didn’t last long, however, as Carpenter and Skarupa skated up the ice toward the Huskies’ goal. After a pass from Carpenter, Skarupa slipped the puck past Chuli for her first goal of the night. Her second came minutes after the first, with the help of Toni Ann Miano.

With less than two minutes left in the game, the Huskies gave the Eagles quite a scare by narrowing BC’s lead. Makenna Newkirk tried to save the shot, but it bounced off her stick back to the forward and allowed her to perfect her shot.

In a game that should have been easier for the Eagles, they struggled mightily with preserving a lead. The Huskies’ offense notched four goals on 13 shots, whereas BC took 38 to put just one more over UConn. Though BC’s defense has worked well enough to help Burt earn 10 shutouts, the lack of shooting practice the star goalie has been getting indicates a deep problem for the Eagles. If Burt allows so many goals from a team with a losing record, it is unclear how she will stand up to Northeastern University in the upcoming Beanpot final or against powerhouse teams in the Hockey East tournament. 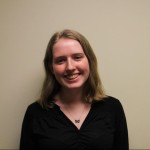 Shannon Kelly was the assistant features editor in 2017 and the associate copy editor in 2016. She could win an Emmy one day! Follow her in advance @ShannonJoyKelly.