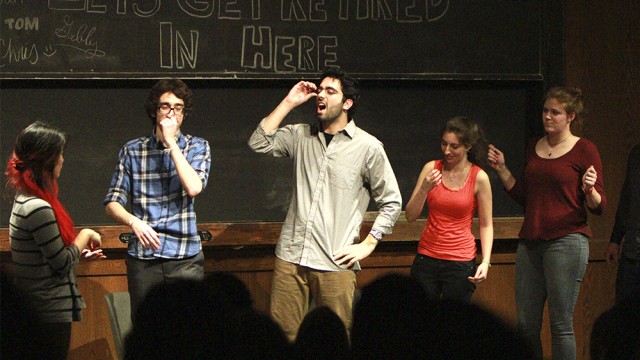 What do finance majors, chapped udders, and Donald Trump have in common?

Not much, except that all three of these bits figured into the Improv Comedy Showdown in Stokes on Saturday night.

Suffolk’s Seriously Bent graced the stage first. The team began its long form by sending out four team members to interview a person from the audience whose story or BC life they could incorporate into their improv. Friends of selected audience members readily betrayed interesting information.

In a stereotypical moment for BC, the majority of those selected were finance majors, one even calling it a “family business.” Another finance major talked about her social entrepreneurship project making dairy-free products. Hilarity ensued as Seriously Bent made merciless fun with typical finance jokes that bordered uncannily on BC’s internal gags about CSOM students, like a son receiving his first cash register and money clip. Some over-milked cows figured in alongside dairy-free activists.

Then NU and Improv’d emerged with a movie-oriented line game in which audience members shouted out two letters from which each team member had to create a movie title and captivating tagline. If the team leader liked a movie title, then two team members had to act out a bit of dialogue. Even when the audience resorted to calling out X’s and Q’s, the team responded gracefully and cleverly nonetheless. The team then continued into a long form, drawing inspiration from an interview with a recent BC graduate from the audience.

BU’s Liquid Fun succeeded Northeastern’s group with “Pan Right, Pan Left,” a game of four scenes with players in a rotating square. The prompts? Secret lovers, prison, one right shoe, and potato. (Potato was successfully executed into a Scottish love story. The team was really great at accents.) Then the team, on the prompt of “lemonade,” told real-life stories about their experiences with lemonade stands, then proceeded to use the common themes in long form.

BC’s own team, the CCE, declared upon its entrance that it would be able to improvise a musical scene from an audience prompt, which is how the audience discovered that a heartwarming family drama could in fact be rendered from the word “sharknado.” All four teams finally contributed three players each to a long line onstage to finish the showdown with one last game. In the bit, “Sex with Me,” the players had to respond to audience prompts with admittedly unprintable but hilariously dirty one-liners. Prompts included Donald Trump and the Super Bowl, adeptly adapted.

The improv was expertly done because the players in each group never forgot to continue storylines from prompts and previous scenes. It is difficult to convey the type of humor in continuity that the improv fostered. But the most entertaining part of all, more than the standalone jokes, was the sense that these are genuinely funny people who love spending time together, coordinating new bits in subtle whispers and cracking up at each other’s jokes without breaking character in scene. There was even a visible level of camaraderie between the teams from different schools and an intimacy with the sitting and standing audience in the small venue. It was a good laugh.