Home » Previewing BC Men’s Hockey: What to Expect in the Beanpot Final 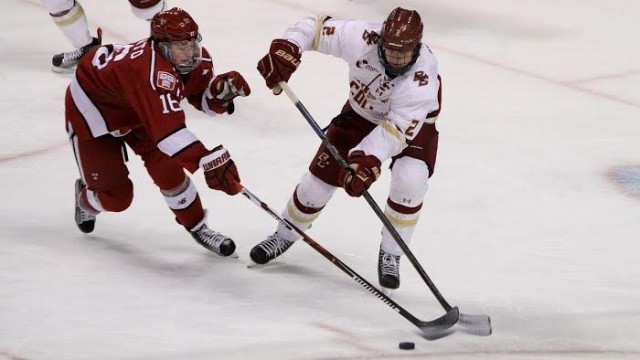 Previewing BC Men’s Hockey: What to Expect in the Beanpot Final

Bragging rights will be on the line when Boston College men’s hockey (19-4-4, 11-1-4 Hockey East) takes on its fiercest rival, Boston University (16-7-4, 9-4-3), in the championship game of the Beanpot tournament on Monday night.

The Eagles come into the game as one of the hottest teams in the nation, having not lost in their first nine games of 2016. Jerry York and Company find themselves atop the Hockey East standings, and they are ranked No. 4 in the country in both the USA Today and USCHO.com polls. In the last two weeks alone, the Eagles have claimed impressive victories at No. 10 Notre Dame and against No. 7 Harvard. Nonetheless, BC had to work hard to claim a 4-3 victory over conference minnows New Hampshire on Friday night.

BU, on the other hand, enters the Beanpot final on a hot streak of its own.  The Terriers have won five straight games, all by two goals or more. In fact, BU’s only defeat in the last two and a half months came in a hard-fought affair at Conte Forum. The Terriers are currently tied for fourth in the Hockey East standings with defending champions Providence, but are ranked a respectable No. 9 in the nation in both national polls. BU may not be one of the National Championship favorites sans 2015 Hobey Baker Award winner Jack Eichel, but it still boasts a talented squad capable of giving BC fits.

BC and BU have already met twice this year, as the two rivals played on back-to-back nights in mid-January. The Eagles successfully defended their home ice in the first contest, as they scored two late third-period goals to walk out of Conte Forum with a hard-earned 5-3 victory. On the next night at BU, both teams struggled to find the back of the net throughout the contest. Despite the two teams combining for 70 shots on goal, the game ended 1-1 after a scoreless overtime period. BU goalie Sean Maguire was well on his way to a 38-save shutout before junior forward Ryan Fitzgerald scored from the right slot with just over two minutes remaining to tie the game for the Eagles.

jerry york ryan fitzgerald sean maguire beanpot 2016
Music of the Roadways, Taking It If We Can
‘Treasure of Hispanic Catholicism’ Explores a Changing Church