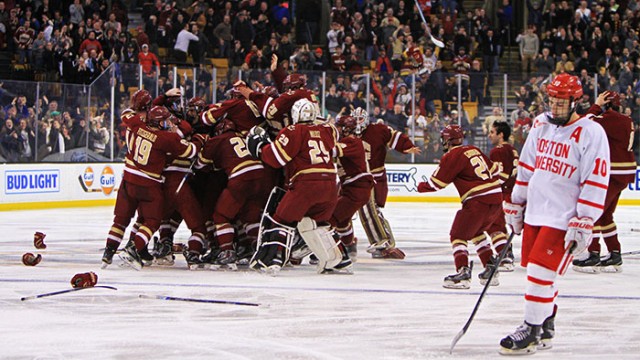 Fans of Boston College and Boston University gathered at the old Boston Garden on the first Monday of February. As they do every three years, the two schools battled in the opening round of the Beanpot. Harvard beat Northeastern 4-3 in overtime, saving college hockey’s greatest rivalry—BC vs. BU—for the nightcap.

But unlike every other year, the primetime game of the 1978 Beanpot wasn’t the one you wanted to play in. On that day, snow fell on Boston at a rapid pace—27.6 inches total, a city record at the time—and fans were trapped on Causeway Street for several days.

On Monday night, ghosts of that February evening returned. With 8:52 remaining in the first period, the lights went out over the ice at TD Garden as BC and BU played in the final round of the 64th Annual Beanpot Tournament. Not enough to allow fans to illuminate the arena like the closing act of a concert, but enough to make play unsafe. For 29 minutes, fans of both teams patiently waited, singing along with the two schools’ bands to Kanye West’s “All of the Lights.”

Unlike 1978, the Terriers walked away from the Garden with bowed heads.

At the game’s outset, it appeared the Eagles would run away with it. The BC offense peppered Terriers goaltender Sean Maguire in the first period with 23 shots, many of them quality chances. Miles Wood and Colin White often led the charge, neither showing any evidence of the injuries he was nursing.

But those attempts all looked the same. All four lines, especially head coach Jerry York’s top line of Wood, Austin Cangelosi, and Adam Gilmour, consistently moved down the ice on the sides, centered a pass at an open net, and whiffed in the crease. Each time, Maguire, the tournament’s MVP and Eberly Trophy winner, was there—the goaltender finished with a .970 save percentage, third-best in tournament history behind BU goaltenders John Curry and Rick DiPietro.

“It could’ve been 4-0 [after the first] if it wasn’t for Sean,” BU head coach David Quinn said.

After the power outage, the Terriers came firing back. And with their goaltender standing on his head, a 5-on-3 late gave BU a golden opportunity late in the first.

For every save Maguire made, Thatcher Demko matched it.

The junior made 30 saves to up his career save percentage in the Beanpot to .947, third-best in tournament history. The 1-0 final was also his ninth of the season, which breaks Cory Schneider’s record for the most shutouts by a BC goalie in a single season.

For much of the final two periods of regulation, the two netminders traded saves. For every attempt on Maguire came another on Demko. Often these saves came in the same sequence, but it’s not like Demko even noticed.

“I’m trying to make a save so we can win, not because the other guy made one,” Demko said following the game.

While the goalies stayed focused on preventing a rain of “sieve” chants from the packed student sections above them, the same can’t be said for the forwards. Neither side had attempts as clean as came in the first. Most passes that came past the neutral zone were intercepted or deflected away easily.

And what happens when hockey players get frustrated? Fights break out.

BU’s Jordan Greenway was the most notable instigator. He dropped gloves with Casey Fitzgerald in the second, earning a double minor as well as a 10-minute game misconduct.

Greenway’s reckless play could’ve proved disastrous for the Eagles. In the third period, the freshman forward broke away from BC’s defense. Demko knocked away Greenway’s shot with ease, but he barrelled into the net, causing Demko to reach for the ground in pain. Immediately, trainer Bert Lenz ran onto the ice to check on BC’s most important player.

But the man who played all of last year on two torn labrums in his hips wouldn’t be stopped by a little hit on the ice.

“I kind of told [Lenz] to get out of my face,” Demko said. “He asked me if I could finish the game, and I just looked at him like he was crazy.”

Without Demko, BC might not have gotten out of regulation. Without Tuch, the game might still be going on.

Less than two minutes into the overtime frame, Tuch stole the puck from a BU defender in the middle of the ice. The sophomore big man eyed Zach Sanford driving on the right side of the net. With a massive windup, Tuch uncorked and fired. He tried to put it low, hoping Sanford, his good friend and linemate, would deflect it into the net. Instead, a BU defender screened Maguire just enough to allow the puck to hit the twine and send TD Garden into a frenzy.

“If I would’ve saw a little bit of it, I would’ve stopped it,” Maguire said. “That’s a pro-level shot.”

The win gave York the only major program record he had yet to beat: the all-time lead for wins in the Beanpot. He now passes John “Snooks” Kelley with his ninth. It’s also only the second time BC and BU played to a 1-0 final—the other came on Dec. 6, 2006, a BC victory at Agganis Arena.

And a tournament once known as the BU Invitational because of the Terriers’ dominance might now need a new name. The Eagles have won six of the last seven Beanpots and haven’t lost to BU in the tournament in a decade. Unlike his rival, former BU head coach Jack Parker, it wouldn’t be York’s style to dub a tournament he has such respect for with a name like that.

But given the way they’ve dominated this decade, the BC Invitational has a nice—and fitting—ring to it.