Home » Cheeseburgers and Childhood: Growing up Listening to Jimmy Buffett 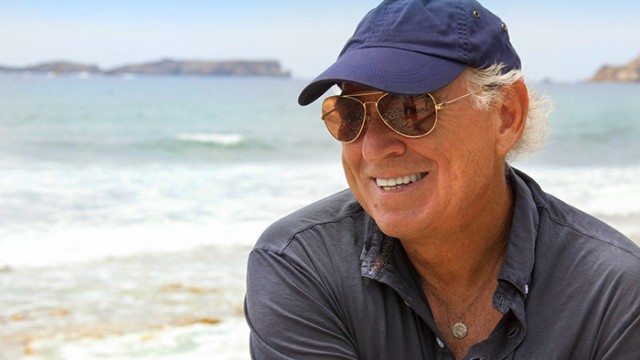 Cheeseburgers and Childhood: Growing up Listening to Jimmy Buffett

If there’s one man I’m most skeptical of in this big, bad world, it’s Jimmy Buffett.

Conduct a thorough Google Image search of the guy, and you’d have to be a Sherlock Holmes-level sleuth to find anything other than a jolly, tan guitarist sporting tinted sunglasses in front of an unconvincing green screen beach backdrop. Every photo shows him holding a drink, keeping a parrot perched on his shoulder, or making that lame “hang loose” sign with his hands that people shouldn’t be allowed to make if they’re not using it ironically. And that’s not even the worst part of it all. In every single snapshot, he’s smiling. He’s. Always. Smiling.

Truth is, unlike the masses of middle-aged, margarita-loving listeners who’d gladly give their right arm to hear the man perform “Fins” live, I’ve never been completely swept away by his beachy background beats and overly-tropical tracks. For instance, I don’t need to be in paradise to properly enjoy a good cheeseburger. I only believe in one rendition of “Brown Eyed Girl,” and it sure isn’t sung by Buffett. Also, people as perpetually happy as he seems to be should never be trusted.

So why, I had to wonder, was I suddenly overcome by a flood of affection when the first fluttering notes of “Come Monday” poured out of my roommate’s bright red Beats Pill the other day? Alarmed, and a little bit embarrassed to be honest, I racked my brain to figure out why a 69-year-old man from Pascagoula, Mississippi had triggered this strange tsunami of nostalgia.

I was 12 when I last heard that song. I mean, I’ve probably “heard” it in the literal sense of the word since then, the instrumental version blaring from speakers in a tacky Florida dive bar or as elevator music during some doctor’s appointment of my past. What I really mean is that I hadn’t actively listened to the song or made sense of its lyrics since the last time my whole family packed into our 2002 Toyota Sienna and drove around the neighborhood for a few hours, just because.

If I had to venture a guess, this practice probably started many years before as a crafty way for my parents to get us kids all tuckered out and ready to turn in for the night. When we were really young, the long drives were a regular part of our nightly routine—they came automatically, just like my mom’s daily inquiries (“How was school today? Anyone out sick?”). Each drive was as certain as dessert after dinner if we had eaten all of our green beans.

Toting his teddy bear by his side, my little brother would climb into his car seat, just waiting to be buckled in. My older sister and I stared out our respective windows once we got too tired to keep talking, and my baby sister would babble something unintelligible out loud to no one in particular.

Despite having hundreds of CDs at our disposal, we only really listened to a handful of albums. My mom liked the lullaby-like swing of Norah Jones songs, while my dad was more of a Garth Brooks kind of guy. At the ripe old age of six, I could recite every word of Bruce’s Born to Run album. Of course, the infectious island escapism of Buffett oozed out of our car speakers on a regular basis.

It was here that I would learn that ‘ol Buffet is “just a son of a son of a sailor,” and when it comes to burger preferences he likes his “with lettuce and tomat-ah, Heinz 57 and french fried potat-ah.” Singing along to the—let’s face it—incredibly foolish lyrics was fun and refreshing. As the stresses of elementary school melted away with each verse of “Margaritaville,” I never realized what this daily break must have done for the rest of my family. It gave my mom a well-deserved break from the inextinguishable energy of the four kids that kept her hands full all day. It was probably the only silly part of my dad’s stressful day of work.

We don’t do that anymore. We haven’t for a long time, actually, and that kills me. We’re all “just way too busy,” too preoccupied with things that seem much more important than making it home on time for family dinner. And I think, for all of us, a leisurely drive is long overdue.

I’m sure I’m not the only college kid yearning for some slice of childhood that seems long gone. But sometimes—call it serendipity if you’re into that sort of thing—the smallest things (your roommate’s Spotify playlist, for example) can bring the old days back right when you least expect it.

Even if it means having to take a break from reality and jam unapologetically to Jimmy Buffet every once in a while, I’ll take a little bit of yesterday any way that I can.

jimmy buffet
Getting Reel with Joe LaRocca and Anthony Gaimari’s ‘Rough Sketch’ Podcast
Disney on Ice, ‘Deadpool,’ and Sexual Chocolate This Weekend in the Arts