Parquet Courts, Mac Demarco, and Porches in Singles This Week

After its last EP Monastic Living likely culled the band’s critics, Parquet Courts return with a relatively approachable single that frames the mundane into something more anxiety-inducing than anything the band has put out before. The end result is a song that will challenge listeners with discomfort.

Mac Demarco, Missing the Old Me, from 2013 demo

Mac Demarco’s goofy swagger and childish demeanor provided fodder for many music critics after his rise to fame. The newly released demo from 2013, “Missing the Old Me,” gives listeners a peek inside Demarco’s headspace shortly after he achieved critical acclaim with the release of “2” in the later part of 2012.

Underneath swirly guitars and pulsing synths, “Car” is a tale of someone tired of sitting still for too long. The song begins tight and immediate, if not sparse, before concluding with a hypnotic surge that seems to rise from unresolved feelings. The few lyrics strung together serve as a reminder of the song’s intent to keep going. More important is the overall impression of movement. 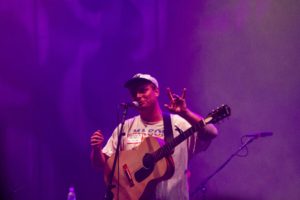