Home » ‘Zoolander 2’ Goes Out of Style with Stumbling Plot 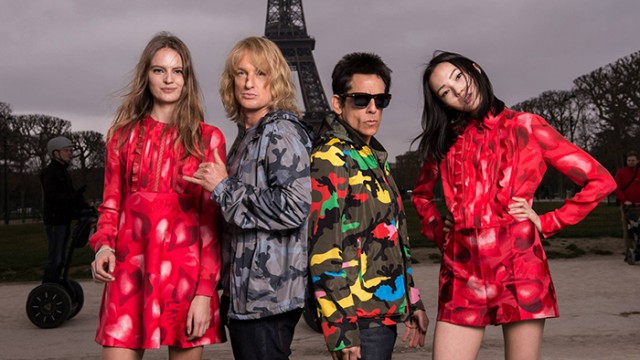 ‘Zoolander 2’ Goes Out of Style with Stumbling Plot

At one point, the cool and suave Hansel warns Ben Stiller’s Derek Zoolander, “Buyer Beware.” And one wonders at that moment, is Owen Wilson’s Hansel calling to us movie-goers and general consumers and saying, “Yeah, I’m really sorry about this man”?

If there’s such a thing as an insider film—like your insider/craft publication—Zoolander 2 is a very expensive one. It seems made as much for fashion geeks (people who recognize Tommy Hilfiger) as it is for fans of Stiller’s Tropic Thunder. Zoolander 2 is some sort of homage to the fashion industry or to the buffoonery of the early- to mid-2000s. And as it turns out, the big screen plays a different kind of game than the runway.

And so, the plot…if that’s what you’d call it. Okay, here we go. Pop stars—Bieber, Demi Lovato (really?), Madonna, etc.—are getting assassinated. Their last look is always one of Derek Zoolander’s Blue Steel (AKA Ferrari, Latigra, and Magnum). You don’t have to remember this. It’s not important at all. Moving on, about 10 years ago, Derek Zoolander’s Center for Kids Who Can’t Read Good and Wanna Learn to Do Other Stuff Good Too (yes, that one) crashes and kills his wife Matilda, who comes back in visions that don’t make sense. And the gist of it is, skipping lots of unimportant details, Derek, Hansel, and Penelope Cruz’s interpol agent/former swimsuit model (gasp!) Valentia (like, ya know, Valentino) have to foil Mugatu’s (he’s baaack) plot to steal the Fountain of Youth, which happens to be Derek’s long lost chubby (oh no!) son. And along the way, the film seats celebrity after celebrity and a few fashion celebrities along the runway to observe and offer an incredulous line or two.

The movie moves along at a skittish pace to an eventual resolution, dropping bits and pieces that it soon finds uninteresting. Parts of the first act explore the world of fashion now—chock-full of hipsters, led by Kyle Mooney’s Don Atari, who tries the least and ends up salvaging some humor out of Stiller and Ferrell. But that whole dilemma is thrown out like last year’s beige peacoat, but not before Zoolander 2 puts its careless eye to Benedict Cumberbatch’s apparently dual-sex All—the it girl/guy of fashion right now. It doesn’t totally work. But in this brief, awkward exchange it feels like writers Justin Theroux, Stiller, Nicholas Stoller, and John Hamburg put their buffoonery to interesting use. Zoolander and Hansel ask All if s/he has a hot dog or a bun and continue on this train of comedy as Cumberbatch—who, without eyebrows, does look quite androgynous—seems to threateningly flirt with Zoolander. We’re supposed to laugh both at Zoolander and Hansel’s gender confusion/simplicity and the ridiculous presentation of one of our “serious” actors in comic drag. And this toes a comedic ground that, for a brief moment, has some heat and makes us uncomfortable.

Comedy and fashion move in trends, cycles. Once upon a soaring trident, Zoolander and Anchorman ruled comedy and in quotes still do (“What is this? A center for ants?”). But Anchorman director Adam McKay moved on (The Big Short). Stiller hasn’t, apparently. And granted it was probably hard, to sit there for 15 years and hear people shout, “It has to be at least…three times this big!” and recreate your own, younger self in front of you. “I can get the magic back. I can rediscover that,” he might have thought. And that sense of rediscovery is written into the film. It’s pretty much all Derek and Hansel talk about, getting their fire back.

There’s a chance that Zoolander 2 follows in the footsteps of its poppa and in those of goofy comedies like Anchorman or Hot Rod and finds its footing not at the box office or comfy, reclining movie theater seats but on streaming services and couches. Maybe its genius cannot be comprehended in the moment and years from now I’ll laugh at the reverse fat jokes. But, and not to burst this last bubble, cult comedies are rarely born out of cult comedies. And despite Penelope Cruz’s earnest commitment from start to finish, Zoolander 2 isn’t any kind of exception.