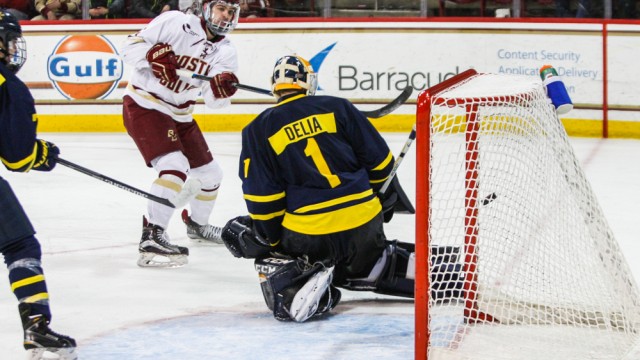 A few short years ago, Merrimack College’s Lawler Rink was nothing but a high school-esque patch of ice with bleachers enough for 1,000 or so people. Since men’s ice hockey head coach Mark Dennehy took over, he has built this program into one that has proved it can compete in Hockey East, the country’s top conference. Dennehy has recruited well enough and has convinced Merrimack’s higher-ups to give him the facilities he needs to think about succeeding.

He hasn’t found consistency just yet. Take a look at this season. Merrimack (8-15-6, 2-9-6 Hockey East) started out hot, climbing as high as No. 13, before taking a pitfall with a poor January that saw the Warriors light the lamp only 10 times all month.

But Dennehy has proved he can bring wins to North Andover, Mass. After all, he got the Warriors to the NCAA tournament in 2011, one of only two appearances for Merrimack (1988 being the other).

Tonight wasn’t one of those nights.

The Warriors collided hard with No. 3 Boston College in a 6-3 loss at Kelley Rink. The Eagles (21-4-4, 12-1-4), meanwhile, maintain their perch atop the Hockey East standings, matching last season’s win total with five games remaining in the regular season and not including BC’s inevitable date with the playoffs.

Early on, you knew it wasn’t going to be one of those days for head coach Jerry York’s superstar offense. At 4.07 goals per game, the Eagles boast the country’s third-best offense. But after tonight, you might think their average was four goals per period. What is more incredible is that they scored in four different ways: even strength, power play, penalty shot, and shorthanded.

Ryan Fitzgerald helped the Eagles get started only a minute into the game. He shook a Merrimack defender out of his skates, pulling the stick over his head before dishing it behind him to Adam Gilmour. The junior sent it high on goaltender Collin Delia for his ninth of the season, giving BC an early 1-0 lead.

Gilmour then gave his own dose of generosity. He took advantage of a hitting from behind penalty on MC’s Mathieu Tibbet, sending a cross-crease pass to a wide-open Zach Sanford, who easily backhanded the puck into the net. Gilmour, a Minnesota Wild prospect, has struggled compared to his breakout sophomore campaign when he was one of the season’s biggest contributors. Now a role player, Gilmour appeared to find the stroke he has been desperately missing all season.

“Adam Gilmour had his best game he’s had this year,” York said. “He could be a real key player for us down the stretch.”

A slashing call on Austin Cangelosi allowed the diminutive center to do what he does best—take a penalty shot. Like his beauty in Jan. 15’s game against Boston University, Cangelosi moved left-right-left-right-left-right before slotting it past Delia. Even better was his celebration, which, as he used his stick as a makeshift violin, harkened back to the days of Fiddle Kid.

Even when the Eagles took penalties, they scored. Travis Jeke had a seat late in the first period for tripping. Cangelosi and Michael Kim did an excellent job snuffing out any chance by Merrimack—they stayed hot on their defensemen at the point as they attempted to rocket the puck in for a chance at a deflection. Their aggressive play forced a turnover initiated by Matthew Gaudreau. He skated down the left side before firing a crisp pass to Colin White on the other end. The freshman and Hobey Baker candidate rifled it into the net before barrelling into Delia, but no matter: the goal still stood.

Merrimack never quit, as its defensemen and alternate captains, Jared Kolquist and Marc Biega, each notched goals to cut BC’s lead to 4-2 entering the third. Yet, unlike previous third periods in which they’ve allowed late leads to slip, the Eagles came back firing. Alex Tuch, the big hero on Monday night in the Beanpot final, slotted the puck past Delia’s left side only 13 seconds into the period for his 12th of the season. Ten minutes later, Sanford found the net again, going bar down for his second of the game after a dish from Kim. And by the time Biega got his second with four minutes remaining, BC had all but officially secured those two points.

Though the competition the next two weeks won’t be as intimidating—BC will travel to North Andover tomorrow before bussing up to Burlington, Vt. to play sixth-place Vermont next weekend—York stressed the necessity of keeping sharp. The Eagles aren’t the holders of the Bertagna Cup just yet, and they’ll need to stay hot to fight off BU, Notre Dame, Providence, and UMass Lowell for the No. 1 seed in the Hockey East Tournament.

“I thought that was a really important game for us,” York said. “Coming off an emotional win Monday night coming right back here to play … all the important stuff is staring right at us.”

On the other end, Dennehy was unimpressed with his team’s performance tonight, especially in the first. He felt the Warriors weren’t ready to play at the pace that BC had coming out of the gate. It’s not for a lack of preparation, as he stressed that the team has been watching the tape of the Eagles’ strong first periods against BU and Harvard in the Beanpot. Rather, he just felt they weren’t mentally prepared.

“When you’re playing a really good team in their rink, it can’t be a 50 minute effort,” Dennehy said. “We stood around and watched … I didn’t think we played in the first 10 minutes.”

Though he reflected on his own team tonight, he noted to reporters earlier this week how he can build his program to the level of BC. He lauded York’s ability to stay competitive every year without experiencing a dip in production, using an analogy to do so.

“[BC] is like a great white shark that loses a tooth, another one just rolls to the front,” Dennehy said. “They don’t have to grow another one, it’s just there.”

It’s fair for Dennehy to want to model his program off BC. Entering Friday, the Warriors hadn’t defeated York’s crew since Feb. 15, 2013, an overtime victory at Lawler Rink. But Merrimack’s luck on the road has been a different story. The Warriors haven’t taken a game at Kelley Rink since Halloween night, 1997.

And now, they’ll have to wait another year to do it.