Home » Newkirk Shines As Eagles Grit Out Win Against Northeastern 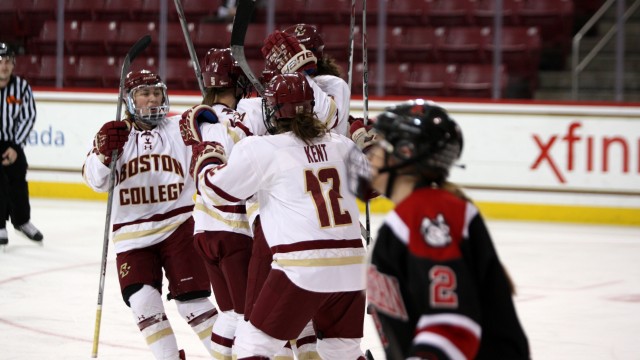 Newkirk Shines As Eagles Grit Out Win Against Northeastern

It must be frustrating to keep losing to the same team.

Rivalries quickly turn into jokes when one side constantly wins over and over. The winning players get cocky or, even worse, disinterested, like the Mets—MLB’s defending National League Champions—when they roll into Philadelphia and take down a pitfiul Phillies team. The losers, who may have at one point dominated or at least kept the rivalry competitive, get angry that they keep losing. And when losing players get angry, they can get dirty, allowing their frustration to seep out onto the playing field.

At one point, Northeastern and Boston College women’s hockey was a proud rivalry. As little as three years ago, the two teams duked it out for several competitive games that went both ways. The Eagles took the regular-season matchups that season, while the Huskies claimed the more prestigious games, including a victory in the Hockey East Championship on Mar. 9, 2013.

Since then, Katie Crowley’s team has, for lack of a better term, owned the Huskies. With their victory today, the No. 1 Eagles (31-0-0, 21-0-0 Hockey East) took down No. 6 Northeastern (25-6-1, 19-3-0) for the fourth time this season to move to 11-0-1 against the girls from St. Botolph Street. With two goals and an assist, freshman Makenna Newkirk led the way. The win also clinches the No. 1 overall seed for BC in the Hockey East Tournament as well as the Hockey East record for wins in a single season.

But it wasn’t nearly as easy as their 7-0 victory over the Huskies in Tuesday’s Beanpot final.

The Eagles started out with one of their flattest periods this season. BC’s offense had a tough time keeping the puck in its own offensive zone early in the first. That frustration forced Lexi Bender to the box with an interference penalty. A mere three seconds later, Northeastern sharpshooter Denisa Krisova knocked in the puck from the blue line to give the Huskies a 1-0 lead. Things didn’t look better when the Eagles’ best defender, Megan Keller, was sent to the box for holding superstar Kendall Coyne.

Led by Bender, the Eagles easily killed off that penalty, swinging the momentum back their way after NU’s Halle Silva was called for a slash. Eight seconds later, Newkirk fired a shot that bounced off goaltender Brittany Bugalski right to Keller. The defenseman slipped with the puck, but it landed perfectly to Haley Skarupa, who fired a one-timer that tied the game. It wouldn’t last long, as an exciting second period was kicked off by Coyne. The 2015 Patty Kazmaier Award finalist took advantage of a scrum in front of Katie Burt to give Northeastern the lead once again.

But soon after, the freshman from Scottsdale, Ariz. took over. The first came off a great forecheck by Andie Anastos in the corner to Bugalski’s left, who skirted the puck out to Dana Trivigno. The captain of the second line shot it between the circles to Newkirk. She moved in quickly before backhanding it top shelf past Bugalski. Less than two minutes later, after a hooking call on Heather Mottau, Newkirk was at it again. Team points leader Alex Carpenter found Newkirk across the ice, giving her a great feed to shoot it bar down on a very small window above Bulgaski’s right shoulder to give BC a 3-2 lead. Following the game, Crowley praised her freshman for yet another standout game.

“She’s a talented kid,” Crowley said. “I think sometimes she can get overlooked because we have national team players on our team, but I tell you, that kid, she’s a special player, and you could see that today.”

Yet Coyne, a member of Team USA, would not be denied a chance to strike back against her bitter rivals. She laid in a beautiful unassisted goal that flew past Burt, her 41st of the season, to knot the game up a mere minute after Newkirk gave BC the lead.

Even that wouldn’t last long. Lauren Kelly went to the box late in the second for hooking. This gave Kenzie Kent just enough time to tie the game with two seconds left in the period after a deflection from Skarupa. With the assist, Skarupa is now tied for third all-time in Hockey East play with 133 points—only Carpenter and Coyne have more.

In the third, the Eagles showed off their defensive skills. Burt masterfully handled several mobs in front of her, using her stick, glove, and body to toss away anything that came toward her. Bugalski tried her best to match Burt shot-for-shot, but when Northeastern head coach Dave Flint called her to the bench for the extra attacker, the game was sealed. Carpenter expertly stole the puck in the neutral zone, skating in easily for an empty-netter in a 5-3 final.

She’d get punished for it by NU defender Taytum Clairmont—a hard check knocked the Eagles’ captain into the boards and onto the ice for a few moments, but Crowley confirmed afterward she was okay. She couldn’t, however, deny the hatred the two teams showed.

“I thought it was a very chippy game, and a little bit chaotic out there, but I thought the team really handled it well,” Crowley said.

But at this point, it shouldn’t be hard for the Eagles to handle a rough-and-tumble game with Northeastern. They’re the ones who keep winning.