Home » Putting Up Shots Isn’t Enough For Merrimack Against BC 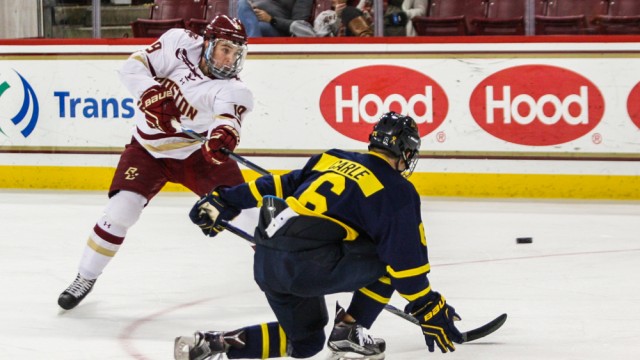 Putting Up Shots Isn’t Enough For Merrimack Against BC

For the most part, Merrimack isn’t that much worse than Boston College.

College Hockey News tracks all Division-I teams’ Corsi close, or percentage of even-strength shots attempted while games are still competitive. This statistic is a good proxy for puck possession because, if a team has the puck more, that team is probably shooting more, which also means that the opposing team is not shooting, an obvious benefit. Entering Friday, BC was 12th in the country in Corsi close at 54.1 percent. Merrimack clocked in at 53.0 percent, 17th-best in the nation. A matchup of the 12th- and 17th-best puck possession teams in the nation would normally make for a solid matchup.

Yet there is good reason for the Warriors’ now-18-year drought on the Heights, and because of that reason, the series opener between these two teams was over after the first half of the first period. Unfortunately for Merrimack, the other parts of the game involve the ultimate objective of hockey: scoring and not letting the other team score.

The Eagles dominated early and Merrimack couldn’t prevent them from capitalizing, nor could Merrimack counter BC’s opening onslaught. BC went up 10-4 in shots and 3-0 in goals after Austin Cangelosi’s penalty shot tally with 11 minutes left in the first. Merrimack outshot BC 29-15 the rest of the way, but it didn’t matter.

Adding up save percentage and shooting percentage is a good measure of how good a team is at those “other parts” of the game. If a team is around 1,000, it’s about average at finishing and stopping the other team from finishing. That addition makes a stat called PDO, named after an Internet commenter who invented a metric that measures the sum of a team’s shooting percentage with its save percentage. Entering Friday, BC’s PDO was 1,058 and Merrimack’s was 976. That showed when Warriors goaltender Collin Delia couldn’t move side to side in time to stop Adam Gilmour and Zach Sanford’s opening two goals, nor could he stop Cangelosi’s 1-0 look.

“We have to work really hard to score goals, just like every other team [playing BC],” Dennehy said. “But we make it way too easy for our opponent at times to score goals, and I thought that was a big difference tonight.”

Merrimack’s Ben Bahe misfired two good chances on rare Demko-surrendered rebounds in the first, and on a power play soon after Cangelosi’s goal, Alex Carle slid a pass to a winding-up Jace Henning that just threw Henning’s one-timer off.

Those are little things, but there are no little things when the gap in creative and goal-tending skill is this vast. By the time Jared Kolquist sniped a wrister past Demko late in the first period to get the Warriors on the board, it was already 4-0 BC, because Colin White had created another goal almost purely with his top end speed.

Whether it’s been Cory Schneider, Nathan Gerbe and Company, or Thatcher Demko, Colin White and Co., York usually has difference makers in net and in the other team’s net that shrink opposing teams’ margin for error. Merrimack’s 17-year streak didn’t necessarily mean that Friday’s game was over before it started, but the Bayesian prior probability was confirmed before the Zamboni took its first stroll around Kelley Rink.