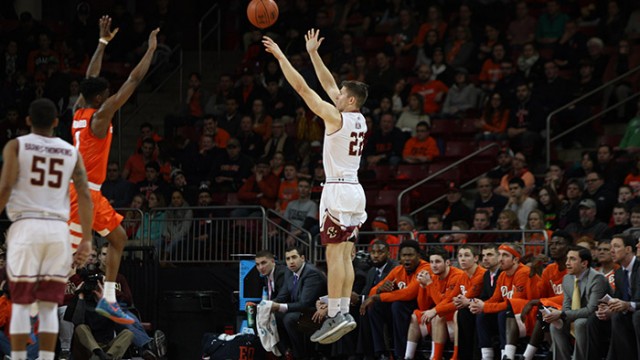 Dennis Clifford turned around, fist pumped, and shouted to an ecstatic bench.

The beleaguered center hadn’t played his best offensive half in the first. He looked slow in his decision-making. When he had successfully penetrated Jim Boeheim’s patented 2-3 zone—and he did a good job at it, too—he froze, unable to make the layup even with open pastures in front of him. When Syracuse’s inside players collapsed on Clifford, he panicked, holding onto the ball instead of dishing it out to one of Boston College’s open players along the perimeter.

But the fifth-year senior suffering through one of the worst four-year stretches in program history refused to be denied. He snatched his own offensive board, pushing away two Orange defenders for a layup that briefly gave BC the lead.

It’s a shame only Matt Milon could help him.

Down two of their best players, freshmen Jerome Robinson and A.J. Turner, the Eagles (7-18, 0-12 Atlantic Coast) relied heavily on Milon and Clifford to lead the charge. The two combined for 41 points in a 75-61 home loss to Syracuse (18-8, 8-5) that made Conte Forum look more like the Carrier Dome East. Milon and Clifford were an effective 15-of-23 from the field (65.2 percent) while the remainder of the roster shot a paltry 7-of-25 (28 percent).

The Eagles fought off Syracuse shot-for-shot early in the first half, forcing the 6,000-plus Orange faithful to keep clapping, as per tradition, until Malachi Richardson knocked down a 3-pointer four minutes into the frame. But the stout Orange defense locked down BC. Helped by several sloppy turnovers, Syracuse went on a 13-0 run led by Tyler Lydon and Michael Gbinije to put the Orange up 21-11 halfway through the first.

Even when BC played good defense, the Orange overcame it. At one point, BC forced Richardson to hold onto the ball until the last second. He chucked up an ugly jumper as the shot clock expired, yet it still found its way into the net, wasting BC’s best defensive series of the half.

But back came the Eagles led by Milon, the sharpshooting freshman with a hot hand from beyond the arc.

Milon scored 15 of his 25 points in the final 10 minutes of the first. That gave him a new career-high, surpassing a 16-point effort against Harvard from earlier this season. Following the game, Boeheim noted how the young guard exploited the zone by getting open.

“Milon’s a deadly shooter, and they did a good job of finding him,” Boeheim said. “I don’t like to see him out there against us.”

His strong effort cut the Syracuse lead to 35-32 at the half, with BC carrying all of the momentum into the next frame. And Clifford, the senior leader, came out of the locker room strong. He grabbed several tough boards over Syracuse’s tough, physical defenders, boxing men out to gain some hard-fought layups. Once again, Boeheim lauded a BC player for his outstanding effort.

“I thought Clifford has gotten better all the time,” Boeheim said. “If he hadn’t had the [season-ending knee] injuries, he’d be a really good player.”

Little did the Eagles know that pushing the ball to Clifford inside was exactly what Boeheim wanted them to do.

The Orange forced Clifford, the only big man on the roster who plays meaningful minutes, to control the ball inside, making the necessary adjustments around the 3-point line to lock down Eli Carter and Milon. While Clifford was successful in the paint and helped to open up some lanes, BC’s supporting cast couldn’t take advantage of this new, single-dimension offense. And, as head coach Jim Christian explained, without Robinson and Turner, there wasn’t really another option but to stick with Clifford in the middle and hope for the best.

“Gbinije is 6-6, 6-and-a-half, 6-7, and [fifth-year senior Trevor] Cooney’s been playing for five years, so to put smaller guys in the middle of the zone, it’s very difficult to get them the ball,” Christian said.

At that point, the Eagles collapsed defensively. Syracuse controlled the clock, especially in the last four minutes, and broke the game open on a big 21-4 run. After knocking down only 3-of-13 shots from beyond the arc in the first half, the Orange was effective in the second, hitting 8-of-10, many coming from Lydon and Richardson. That, coupled with the strong defensive effort, proved Boeheim’s system works to perfection.

Taking away the three was something the Eagles simply couldn’t do. BC allowed Syracuse to knock down several “walk in threes,” as Christian calls them. Many were on individual defensive breakdowns that showed BC’s fatigue. It’s hard to fault them for being tired. With a short bench, three players—Milon, Carter, and Clifford—had to play 37 minutes or more and control most of the offensive possessions.

But Christian doesn’t give excuses anymore, not even for a team that hasn’t won an ACC game in almost a calendar year and is built almost entirely on freshmen.

“You can feel sorry that we don’t have a lot of guys, and we’ve got two guys over there hurt, but the guys who are playing, that game’s in the balance,” Christian said. “You have to be mentally tougher and get through that.”