Home » BC bOp! Offers Refuge from the Cold With Warm Sounds and Sweet Melodies 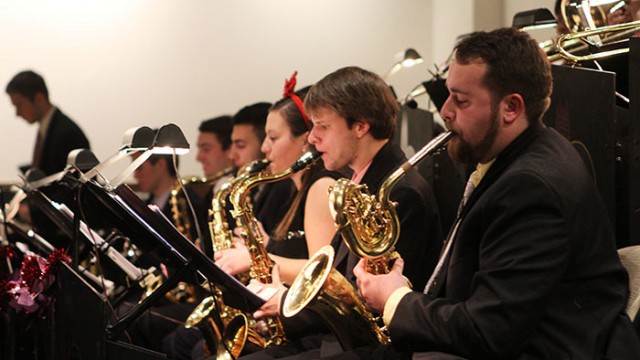 BC bOp! Offers Refuge from the Cold With Warm Sounds and Sweet Melodies

To usher in this frigid February weekend’s festivities, Boston College’s jazz ensemble, BC bOp!, serenaded the gathered crowd of freeze-fleeing listeners with its Valentine’s Day themed performance, “In the Name of Love.” Decked in lovely suits and stylized bandstands, the members of BC bOp! imbued the Heights Room in Corcoran Commons with a passionate zest and spirit that enraptured the audience.

The Heights Room was a premier venue for bOp!’s concert, since its spaciousness allowed for a dance floor that the audience could groove on during some of bOp!’s more fast-paced, popular numbers. Songs like Earth, Wind, & Fire’s “September” and Mark Ronson’s “Uptown Funk” had the large crowd shaking the entire Heights Room with an overwhelming energy.

In many respects, bOp!’s covers of more popular songs are what makes bOp! so memorable.

While the more traditional jazz numbers are still very much at the heart of bOp!’s performance, its covers seem to holistically grab audiences’ attention, and for good reason, too. It’s hard not to get lost in Mike Mastellone’s, CSOM ’18, take on the Frankie Valli classic “Can’t Take My Eyes Off You.” His performance is just about as engaging as one could possibly be, and he’s sure to receive a standing ovation each time he sings it.

That being said, this isn’t the first or second time bOp! has played this song at one of its concerts. While Mastellone’s hit may be one of bOp!’s biggest crowd-pleasers, it would be interesting to see the ensemble take on more new songs with each new performance. “Can’t Take My Eyes Off You” isn’t the only song that bOp! has recycled this year. “That Cat is High,” “Footloose,” “Uptown Funk,” and “September” have all been featured in bOp! performances before, and while these songs can definitely be labeled as “crowd favorites,” a regular bOp! attendee may hope to hear bOp! tackle some more modern hits.

bOp!’s performance, on the other hand, was made up of much more than just the jazz ensemble’s recycled hits. Because this is Valentine’s Day weekend, bOp! went through a few songs that lived up to the performance’s title, “In the Name of Love.” Songs like “April in Paris” and “Kiss From A Rose” kept the show’s theme centered on romance and its tone multi-faceted. Pairing Nina Simone’s romping “Feeling Good” with the jazz classic “Almost Like Being In Love” showcased bOp!’s variability, as well as its horn and saxophone sections’ prowess and solidarity.

“In The Name of Love” also featured some standout individual performances. Max Warwick, CSOM ’16, and Sanjay Pamaar, MCAS ’18, gave the horn and saxophone players a magnificent beat to weave in and out of in “Hay Burner.” Adam Fung, MCAS ’16, provided stunning vocals for “Feeling Good.” Meanwhile, Andrew Tort, MCAS ’18, and Justin Solle, MCAS ’16, rocked out through several keyboard solos throughout the show. While bOp! only exists because of the musicians’ togetherness, these and a few other notable individual spotlights keep the show’s pace up and highlight the individual talent that bOp! is rife with.

Friday night’s performance was emblematic of BC bOp! in many ways. The show exuded professionalism, yet kept the atmosphere accessible and welcoming to those who aren’t entirely familiar with the jazz classics. While it would be nice to see more of a variety with bOp!’s covers of contemporary popular songs, it’s entirely necessary to note that hits like “Can’t Take My Eyes Off You” and “September” overflow audiences with excitement. This energy was best shown on the dance floor, where the audience seemingly danced without a care in the world. bOp!’s soulful melodies demanded them to.

bc b0p!
DIIV Seeks Redemption and a Return to Relevancy in ‘Is The Is Are’
Potential Club Football Team Provides Athletic Outlet for Students