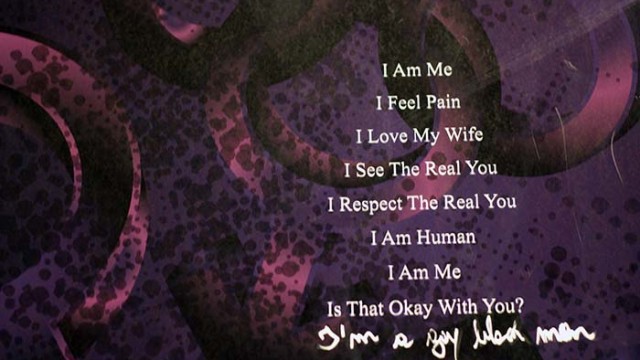 Today’s world can be categorized by many things. This has been the age of information, where facts rest at the tips of our fingers. This has been the age of exploration, as we probe deeper into the recesses of space. This has been an age of fear, as we look upon the global stage with uncertainty. But this age has also been a testament to something less perceptible than the influence of technology and less extravagant than our ventures into the cosmos. This has been an age of self-searching as people everywhere seek to orient themselves within our societal framework. The question “Who am I?” has never been more common and remains as elusive as ever. “Gender Identities: Expression in the Black Community,” on display on the first floor of O’Neill Library, poses this question as it pertains to gender and identity in the black community.

Artist Frank Garcia-Ornelas, GSSW ’16, was commissioned by the Thea Bowman AHANA and Intercultural Center, the vice president of student affairs, and Boston College Libraries to create the exhibit for Black History Month. Through its display of photos and quotes, Garcia-Ornelas hoped “to ignite some emotions which hopefully encourage the viewer to examine their own ideologies,” as he said in an email. In looking at other people’s struggles, one may come to better understand oneself.

The gallery displays numerous pieces which draw on the role of identity within the black community in one form or another. Upon entry into the gallery, one is greeted with stanzas from poet Vernon J. Davis, Jr.’s “Beautiful Black Woman,” setting the tone for the rest of the pieces. Within the poem, ideas of a sound mind, will, power, and beauty are attributed to the woman. These factors culminate in the final line, which states that within the woman “lies the future.” The poem exalts the black woman, implying her importance for her current existence as well as the integral part she plays in the future. Above the excerpt is pa ortrait of a black woman, with closed eyes and head tilted, resting in silence. This image coupled with the accompanying poem, calls to mind a sense of struggle, in spite of the implied strength and power the woman possesses.

Another piece quotes Corinthians 13:4-8 as it speaks to the purity of love, which pays no mind to wrongdoing and prejudice, while exuding qualities of patience and kindness. The image of a homosexual black couple reinforces the simple, yet poignant point that love truly is blind.

One of the most provocative pieces is a collage of statements from BC undergraduates. In the piece, thoughts about identity fill a lined page. Including several “I AM…” statements, as well as how some individuals view themselves within the social fabric, the collage is fascinating as it calls one to assess how one views oneself within these same conditions. And within such thoughts, ideas of solidarity cannot fail to come to mind.

Within these statements, students raise issues in both a personal and interpersonal fashion. Where some may feel they are comfortable with themselves, there remains a sense of unease when relating themselves to others. One quote reads, “I identify as female, but if I didn’t I probably wouldn’t be accepted in my racial group.” These kinds of notions relay the struggle Garcia-Ornelas hoped to highlight, as in many cases individuals try to find harmony between themselves and their racial identities. This warrants reflection, not only by those who may relate to such ideas, but also by those who may not “look within themselves and reflect on their own biases about issues around gender identity,” as Garcia-Ornelas put it.

“I create art to evoke conversation about my pieces,” Garcia-Ornelas said. “They are social justice focused and at times unfiltered because I want to express the truth in my work. I do it in support of those who have been oppressed do [sic] to the injustices of society.”

“Gender Identities: Expression in the Black Community” is a worthwhile exhibit to examine the relation between identity, race, and gender. During Black History Month, the exhibit will call to mind important issues being discussed in the world today. As many people search to find themselves, works like these will certainly lend some perspective to the positions of others, as well as help situate ourselves within the larger social fabric. The feelings of solidarity, of the human condition, remain as inspiring as they are empowering.

expression in the black community frank garcia-ornelas
For BC Students, the Nights End with Chicken Fingers
DIIV Seeks Redemption and a Return to Relevancy in ‘Is The Is Are’