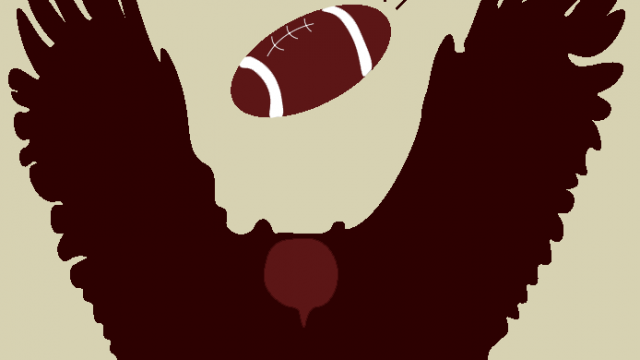 What does Boston University have that Boston College doesn’t? Apparently, a club football team. But worry not, because Robert Jacques, CSOM ’18, and Michael Cerminaro, MCAS ’19, are rectifying this situation by spearheading the effort to form the first club football team at BC. For the past year, the two of them have been working diligently to allow this club to take shape. The club is still in the approval process, but the approval meeting is scheduled for this April. Jacques and Cerminaro have lost no time.

“This September we made it our goal to be as prepared for the meeting as we can be, so they have little to reject it on,” Jacques said. “So we’ve been working on the budget and the constitution, working on getting the roster together. It’s been an interesting year.”

Right now, Jacques and Cerminaro’s roster has 49 members. “[That’s] only counting people that we have all their information for,” Jacques said. “We have a few others, but just to be sure we are counting those who gave us everything.”

At the last major meeting in December, around 40 students showed. Since the club is still in the approval process, the members are part of one of three committees within the club: finance, membership, and rules. Presiding over the committees is the E-Board, of which Jacques is president and Cerminaro is vice president and head of the finance committee. If the club is approved, there will be an additional player’s side, and the club members can both play and be a part of the management process.

“We’ve really been working hard, honestly,” Cerminaro said. “There’s a lot of things that go into it. I don’t even know if I was expecting how much work it would take, but we’re trying to take every step necessary to please the [BC] committee and give us the best chance of being approved.”

A club football team is different from varsity, because club football is almost completely student-run and less of a time commitment. Club football also provides a different experience of football. In high school, many students join a team and do not have a say in how the team is run or what the team looks like. Club football, meanwhile, is more democratic—it will give students a chance to be part of the process, and have a voice in what they do.

Cerminaro and Jacques are doing their best to get space on the football field on Brighton campus. They also already know what they want practice to look like.

“We’re looking at two or three times a week, most likely they would be later in the day just so that we can allow people to clear out their schedules,” Cerminaro said. “We need to get kids there on a consistent basis to go over plays and formations and things like that. In terms of time commitment, it would be less than high school football, but still definitely something you’re going to commit yourself to.”

The football club is always happy to accept more members. They are also looking for a volunteer coach, preferably a graduate student. Students from all class years, however, are encouraged to be in touch if they have any interest at all. The upcoming semesters, Ceminaro assures, are full of promise for the team and anyone interested in getting involved.

“If, and hopefully when, we get approved, we can just promise everyone that next year’s going to be blast,” Ceminaro said in a pitch to prospective students who find themselves on the fence about reaching out. “We’re going to make it the best that we can.”