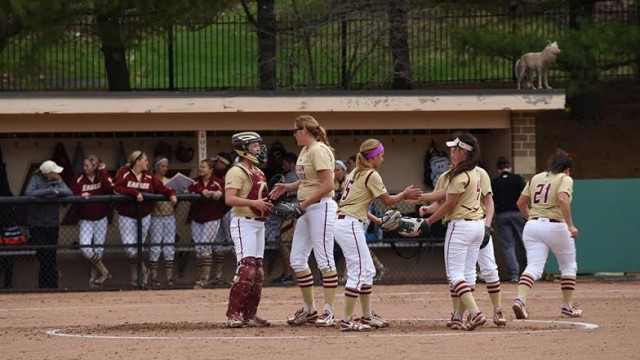 Stagnant offense led BC to fall to Utah, 3-1. In the bottom of the second Bridget Castro’s ground-rule double drove in Aubrey Peterson to give the Utes a 1-0 lead. In the third, Ally Dickman’s double knocked in Kristen Stewart for another Utah score. It wasn’t until the sixth that the Utes would add their final run. Delilah Pacheco’s shot to left field drove in Bridget Castro for the score. The Eagles’ only run of the game came in the top of the seventh, when Megan Cooley scored off a Chloe Sharabba single.

Heading into the Oregon game, the Eagles looked to make program history by defeating a Top 10 opponent for the first time, but the Ducks proved to be too much as BC fell, 4-0. It took the Eagles almost seven innings to get a hit off of Cheridan Hawkins, who recorded eight strikeouts and pitched a complete game. Sharabba’s sixth-inning double would be BC’s only offense of the game. Oregon’s Koral Costa knocked out a two-run homer in the top of the second to jump out to a 2-0 lead. In the third, pitcher Allyson Frei hit Oregon’s Jenna Lilley with a pitch. Lauren Lindvall’s double brought Lilley home to boost the Ducks’ lead to 3-0. A groundout brought Lindvall home in the seventh to give Oregon a 4-0 lead.

Fresno State handed BC a 3-1 loss. Neither team took an early lead. The contest remained scoreless until the bottom of the sixth, when Tatiana Cortez’ single sent Loren DiEmmanuele home to give the Eagles a 1-0 advantage. In the top of the seventh, BC squandered its lead. A pair of errors gave the Bulldogs two runners in scoring position, and a subsequent single sent one home to tie it at 1-1. Kaitlyn Jennings scored to give Fresno the lead following another error. The Bulldogs braced their lead to 3-1 when Paige Gumz’ sacrifice fly sent Malia Rivers home.

The Eagles recorded a dominant victory, 8-1, in their game against the University of Nevada. Frei allowed one run and four hits over five innings while striking out four batters. Meanwhile, the Eagles jumped out to an early lead, scoring four runs throughout the second and third innings. In the top of the fifth, the Wolf Pack scored to bring the tally to 4-1. From there, BC never looked back. Annie Murphy’s single brought Sharabba home in the bottom of the fifth. Later that inning, Jordan Chimento batted Carly Severini and Murphy home to pad the lead to 7-1. The Eagles scored their final run of the game in the sixth inning when Murphy’s groundout brought Cortez home.

BC had to overcome a three-run deficit to defeat San Jose, 4-3. Frei allowed the Spartans to jump out to an early 3-0 lead, but her replacement, Jessica Dreswick, kept them scoreless and allowed just three hits in more than five innings pitched. A bases-loaded walk gave BC its first score in the third inning. One inning later Jessie Daulton’s two-run homer tied the score at three apiece. An error by Spartan third baseman Emma Entzminger allowed Cooley to score the winning run in the fifth inning.

BC enjoyed a commanding 9-1 victory over the Terrapins. Frei allowed one unearned run as she struck out six batters and threw four single-hit innings. On the offensive side, the Eagles opened up scoring in the bottom of the first inning when Cooley advanced home on an illegal pitch. The Terps’ lone run of the game came in the top of the third to tie the score up at one apiece. With two outs in the bottom of the third, BC exploded offensively and scored four runs to take a decisive lead. After Murphy and Cortez got on base, Sharabba batted both of them in. DiEmmanuele brought Sharabba home before Severini knocked DiEmmanuele in for the fourth run of the inning. Daulton added two more of the final four runs in the fourth and sixth innings, bringing the total tally to 9-1, Eagles. 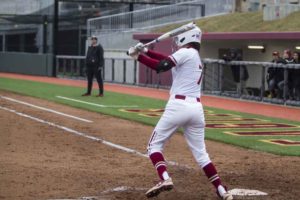