Falling in Love with Boston College

It was an envelope. It was a hunch. It was a name you’d known for some time. However it happened, the moment you “became” Boston College most likely felt like fate—because after all, it’s supposed to feel that way.

Being wedded to your college most certainly has its benefits. For me at least, in choosing where to apply, the emphasis was on falling in love. In hindsight, it was a slightly unreasonable expectation of a high school senior, but essentially the premise of the process for me was that if you walked around enough campuses, you’d be able to simply know where you needed to be.

Quality of education, of course, played a part in final judgments, but most of the concern there was where you could get in. SAT scores (which are increasingly falling out of the favor of admissions committees) felt symbolic—some guise of science in a process that was anything but that.

This “love,” of course, would need to be reciprocated. As admissions officers would tell you most every info session you’d attend, there was no “formula” for getting admitted. It was a holistic approach, which is to say that American admissions committee are open to falling in love too.

Particularly at BC—with Pedro Arrupe’s task force constantly lurking the dining halls—falling in love with the University, with the college experience, can feel near compulsory. “Fall in love, stay in love, and it will decide everything,” the prayer goes. We get a lot of that the first few months. At freshman orientation, there was no contrarian speech telling you that, in fact, your initial love might be little more than a fleeting feeling, that what you do in college might not decide everything, that you can potentially finagle a lot out of an experience you don’t especially love.

That speech, admittedly, would be a dreary start to things—and on another level, it would feel like an altogether heretical point of view for a BC student to take. As a senior, it’s hard for me to feel anything other than gratitude for the past four years, and yet, I can say that the early emphasis on accepting BC as a perfect fit wasn’t particularly helpful to me.

Marketing college as an experience rather than an environment pushes students toward unrealistic expectations of the services BC can provide. When you analyze the steady increase in tuition over the last two decades—which has heavily outpaced inflation—the windfall of those tuition dollars has disproportionately been directed toward the expansion of services provided to students (while academic resources have not enjoyed the same level of growth).

Universities provide a whole lot more than they once did. Once simply places to learn, these institutions now serve as mechanisms for the mass consolidation of wealth—a trend federal lawmakers are now investigating at highly endowed universities like BC. I bring this up to point out a potentially fraught connection between money and happiness, particularly in the case of higher learning.

Getting an education is a high-stakes exercise for most students, whether they’re personally taking on extreme levels of student debt or their families are footing the bill for an education which grows in expense each year. When students “fall in love,” it gets difficult for them to rationally engage in this highly consequential financial decision.

Beyond that, this heavy commitment results in unhealthy expectations all around: parents, students, administrators, and faculty are all expected to meet increasing demands, often at odds with the reality of what they can give. And for the students, your happiness can feel like a mandate—if you’re anything less than infatuated, you’re afraid to admit it. It would mean letting down your family, letting down yourself, and damaging the mythology that keeps the higher ed behemoth afloat.

It’s a situation where falling in love is imperative—a magic that governs this massive financial exchange. All stakeholders (students, parents, the University) have a strong interest in perpetuating the view that a college education is worth a lot more than the sum of its parts, that there’s something fateful in that admissions envelope, that this experience fundamentally defines who we are.

Fall in love, stay in love—or maybe not. It isn’t unreasonable to expect to find the kind of love Arrupe speaks about at BC, but it most certainly did not arrive in the admissions envelope. I would even hazard to say the odds are pretty good you could have found that same love somewhere else. You don’t need to be married to the institution you attend or the ideas it espouses to have a healthy relationship with it.

The idea of fit—that your emotional connection to a place should take precedence over all else—necessarily distances us from the reality of who we are and what BC can give us. It undercuts the hard work required to make our commitment work. And most damagingly, it closes our perspective, making us less receptive to unexpected opportunities.

love admission
How to Learn to Love Your Body
‘Who is Pablo?’ 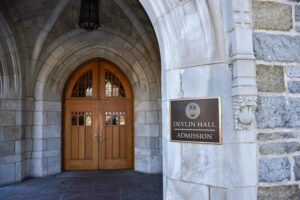