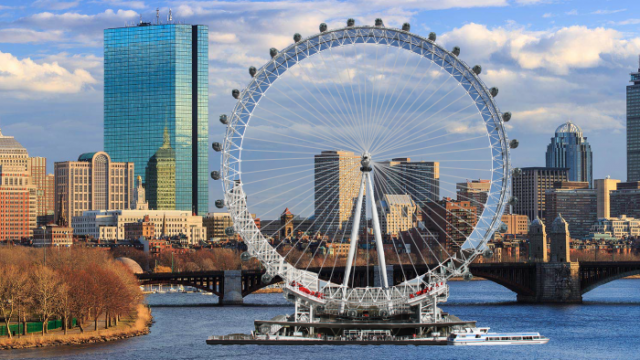 Cafe Nero on Washington Street is, of course, just another coffee shop on another Boston street. Even the sophisticated aura of the place—suggested by the dark wood paneling, tall fireplace, exposed light bulbs, and high ceilings—cannot hide this fact. A step inside reveals regular coffee-goers, people meeting friends, stressed students hunched over Macbooks, awkward first dates, and overworked baristas.

But to me, Cafe Nero is not just another coffee shop. The last time I visited this coffee shop was during the summer on a trip to England. Last summer my aunt, my sister, my grandmother, and I went to England for two weeks. It was my first time abroad, and I loved it. We visited London, Bath, and Oxford. We took two Harry Potter tours, seeing Diagon Alley and the inspiration for the Great Hall. We took a ride on the London Eye. We visited Westminster Abbey and stood where Will and Kate got married. We saw the Lion King in theaters, which was spectacular. We climbed all 200 steps to the top of Bath Abbey—one of the most stunning views I have seen. We strolled through Hyde Park. We visited countless museums. We all got lost in the three-mile basement of a bookstore. We went to Oxford University, where the weight of history is felt as soon as you step on campus, and which my sister decided she would like to attend.

And we went to Cafe Nero. We would rush there if we woke up late or if we needed a midday snack. As we wished to explore the cities around us, it was never the goal to spend so much time in Cafe Nero, but we did, and the shop became an important part of our trip. I remember visiting the Cafe in Trafalgar Square, looking through the window at the intimidating lion statues and immense sculptures that seemed to pierce the sky. I remember visiting the Café in London, looking at a regular London street—but to me it was more than that, because it was somewhere that was not Boston. I remember the time we spent together in the coffee shop, because it was more time than the four of us had to spend together at home.

Leaving England was bittersweet. Like everyone else, I was ready to return home, but I was not quite ready to leave. For someone who had only experienced cities in America, London, Bath, and Oxford were exciting and incredible. I wanted to keep traveling, to see more cities in England, and beyond. But our plane tickets dictated otherwise, and it was time to go home.

I did not expect to experience London again for a long time, but the opportunity came sooner than I thought. Last weekend I ventured into Boston—seeking to embrace the city around me, perhaps—and visited Cafe Nero. I noticed the differences immediately. The Cafe Nero on this side of the pond is larger and has more room for seating. This shop is also packed with people, as it had recently opened at this location. I was going to meet my aunt, and we decided that the new Cafe Nero would be the perfect place to go. We miraculously got a seat and tried the food. We had a great time talking and laughing, discussing my involvements on campus and my aunt’s upcoming trip to New York City.

For a moment it felt like England again. I’ll never forget my first time abroad, and spending the afternoon in Cafe Nero with my aunt was a reminder of that experience. Even though we were missing my sister and grandmother, for a moment there might have been red double-decker buses or lion statues waiting on the other side of the window.

There weren’t, but until the next time I go to London, Cafe Nero on Washington Street will be more than enough.