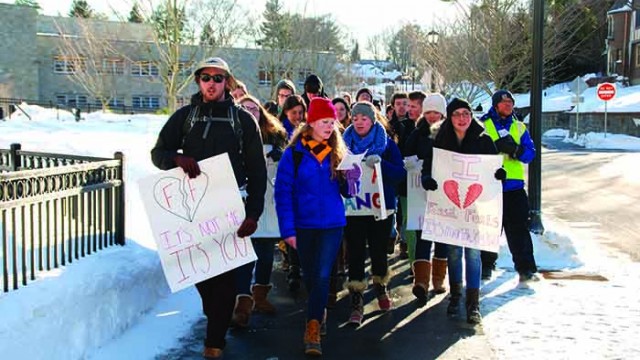 Climate Justice at Boston College (CJBC) is one of the 26 funding campaigns of the Multi-School Fossil Fuel Divest Fund. The fund began as a grassroots collaborative that connected donors to campus divestment efforts, such as those led by CJBC. After three active years on campus and several attempts at becoming a registered student organization (RSO), CJBC was officially recognized as an RSO this past fall.

The Divestment Fund hosted an auction that coincided with the 2015 United Nations Climate Change Conference, which negotiated the Paris Agreement that pushed for the reduction of climate change, including global greenhouse emissions. The Divestment Fund hoped to connect local divestment initiatives to the global climate crisis seen at the conference.

The auction raised over $50,000 by selling items related to divestment campaigns, such as lunch with climate scientist James Hansen. Climate justice activists offered items that would assist their goals of changing the future of the environment, like Zipcar gift certificates and a CSA Farm Share.

Jorge Mejia, MCAS ’19, said the purpose of the auction was to pressure institutions to divest in fossil fuels, because, in doing so, they will be able to access the funds that the Multi-School Fossil Fuel Divest Fund has raised. CJBC is unsure how much money BC invests in fossil fuels, but it hopes to find out more if BC is required by federal law to reveal where assets go.

Fran Ludwig, member of BC Alumni for Climate Justice and BC ’63, assisted with the organization of the fund. He explained that he wanted the auction to be inclusive in all aspects. By doing so, he hoped to engage people in the climate justice movement, particularly fossil fuel divestment.

CJBC stands by its mission of empowering BC on fossil fuel divestment. Bobby Wengronowitz, GMCAS ’19, said that, though his organization has had a difficult journey, it has achieved its goal of raising awareness and pressuring the administration.

“The idea is that these groups raised funds that they were holding, offering it to institutions if they agreed to divest,” Mejia said. “Through the fund, they could offer a large donation but only if the institution agreed to its terms of divesting in fossil fuels.”

Correction: this article originally stated that Bobby Wengronowitz was the speaker of the final quote. It was Jorge Mejia.