Home » ‘Learning How to Drown’ Proves Love is No Myth 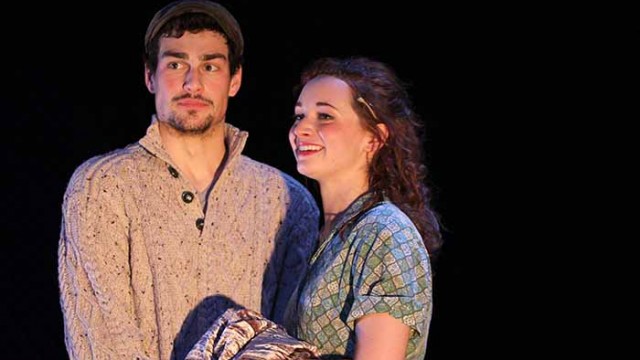 ‘Learning How to Drown’ Proves Love is No Myth

When mythology comes to mind, there are a few creatures that, millennia after they were conceived, still permeate popular culture. The kraken, centaur, and Cyclops are seen in blockbusters made in the last decade and are still rife in the multitudes of fiction novels published each year. While a myriad of ancient creatures still captivate the public’s attention, many fall into the recesses of irrelevancy and are at first difficult to remember when reintroduced into modern culture.

Such is the case with the selkie—a seal that has the ability to shed its skin and live on land for one year every seven years. This Irish and Scottish sea-beast might not be at the forefront of most writers’ minds when they think of great creatures to center a story around, but in the case of Bonn Studio’s latest musical, Learning How to Drown, the selkie actually works as a wonderful catalyst to tell a tale of a love lost, a love that is, and a love that could be. The musical was written and scored by Patricia Noonan, BC ’07, and plays in Robsham Theater through Saturday.

Emma O’Connell and her boyfriend John live in Manhattan in 2011. They’re young, they’re in love, and, presently, they’re trying to evade Hurricane Irene. The two lovers hole up in Emma’s apartment and, when things start to get romantic, John asks Emma to marry him. Emma, startled by the suddenness of John’s proposal, refuses, vaguely explaining to John that she doesn’t want to seal her future. John isn’t satisfied with this answer. He loves Emma too much to accept her doubts. Pressured by her genuine affection for John, Emma tells him a story to help explain her thoughts—a story John isn’t too keen, at first, to believe.

In the early ’40s, Emma’s grandmother and grandfather, Clare and Aidan, meet on a beach. We find out, along with Aidan, that Clare is a selkie who has just began her year on land. After a bit of prodding, Aidan begins to believe that Clare actually is a selkie, and the two, rapidly falling for each other, decide to travel the Nordic seas in Clare’s year as a human. A beautiful, yet troubled relationship unfolds between Clare and Aidan, and the two are separated time and time again.

Notably, the same pair of actors portrays the two pairs of lovers. Jared Reinfeldt, MCAS ’16, takes on Aidan and John while Caroline Portu, MCAS ’16, graces the stage as Clare and Emma. Seamless transitions and musical numbers separate the two interweaving stories and the two actors switch from their modern American accents to Irish accents in a matter of mere seconds.

Clare and Aidan’s daughter, Emma’s mother Lori, isn’t left out of the fold either. Amanda Melvin, MCAS ’17, portrays an older Lori, a photographer traveling around the world with a young Emma, while Julia James, MCAS ’17, plays a younger Lori, growing up in Clare and Aidan’s house. Lori bridges the gap between the oldest and youngest generations. She helps Emma understand where Clare and Aidan failed in their relationship, while also prompting Emma to live her life to the fullest, seeing as much as she possibly can.

While the time jumps in Learning How to Drown may sound a bit confusing, they’re actually executed exceedingly well. There’s no point where a viewer might question if they’re watching the present or the past. The grandparents’ Irish accents and costumes help in this regard. The set design also lends itself to the time jumps throughout the show. Rocks are melded onto the sides of a wooden floor-set, while a wavy, painted blue base represents the ocean. The two primary settings are Emma’s apartment and the beach where Clare and Aidan meet, so the intriguing and innovative set design does well in capturing these distinct locations.

The Celtic Irish musical numbers are both a lot of fun and quite engaging and evocative. A live band in the corner of Bonn Studio performs them and the live instrumentation is extremely appreciable. The songs also exude an array of emotions that are appropriate to the several themes and developments in the show. The only complaint on this front is that the actors, at times, aren’t able to hold their Irish accents in their singing, but this is only occasionally noticeable. It’s fitting that a musical centered on Irish folklore would include this type of music and this style adds another uncommon, yet lovely facet to Learning How to Drown.

There’s a lot going on in Learning How to Drown. It explores three generations of a family with an interesting perspective, interweaving the sets of characters along with their hopes, dreams, and worldviews. Between past and present, we see lovers seduced by the possibility of worldwide exploration and lovers overwhelmed by the fact that there might not be much left in the world to explore. Learning How to Drown, despite its seemingly bizarre driving narrative, is a compassionate tale of love, loss, and the sea, and what we, as people and seals alike, can learn from them.