Home » Toby Ampadu and His Fight for the American Dream 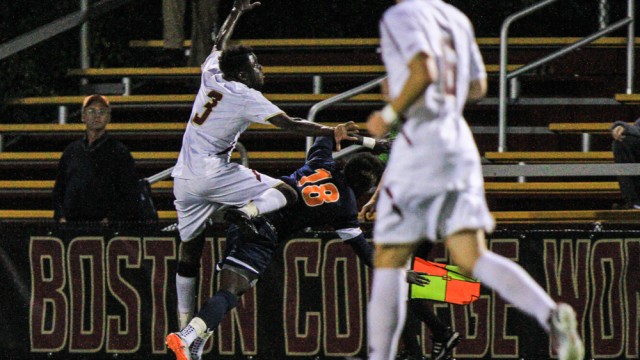 Toby Ampadu and His Fight for the American Dream

Though it didn’t come as a shock to the ex-captain of Boston College men’s soccer, the outcome left Ampadu with serious questions about his future. The Accra, Ghana, native graduated from BC in December, just 10 days after Syracuse ended the Eagles’ Cinderella run in the NCAA Tournament before they could clinch their first College Cup berth in school history. A week earlier, Ampadu held Yaro’s No. 2 Georgetown to only one goal in BC’s upset win in the Sweet Sixteen. Before that, Ampadu’s Eagles were a mere afterthought in the ACC.

Now, the left back is training in Boston as he awaits the verdicts of his tryouts with teams from the North American Soccer League (NASL) and United Soccer League (USL), where most players earn less than $40,000 a year. In each league, Ampadu and his agent are starting at the top of the standings and working their way down the list of potential destinations for the 24-year-old.

“I want to stay in the game here [in America], I’m planning on that,” Ampadu said in a phone interview earlier this week. “But for me, it’s very difficult to get on a club because I’m not American. They have so much to do for me in terms of waivers and stuff like that.”

It might be easier to pursue soccer overseas, where the sport garners genuine, widespread interest that can help Ampadu cut a bigger check. Or he could use his degree from BC to get a job here or abroad, or even return to Ghana to reunite with family and friends in his hometown.

As tempting as those options may be, Ampadu is opting to chase the American Dream on the pitch, even if he has to absorb an offseason job in order to supplement his professional soccer aspirations. And there’s something noble in that.

The road to the U.S. hasn’t been an easy one for Ampadu, who, along with fellow Eagles Mohammed Moro and Ike Normesinu, earned a chance to come to America through Right to Dream, an organization that provides scholarships to gifted African athletes. Many of Ampadu’s childhood friends, like Mohammed Abu, chose to skip college and head straight to Europe to pursue a professional career. Instead, Ampadu picked The Hotchkiss School, a private boarding school in Connecticut with a yearly tuition upwards of $50,000. The college matriculation rate? 100 percent. The motto? “Be a gentleman.”

Talk about a culture shock.

Nevertheless, Ampadu excelled at the prep school, leading the Bearcats to back-to-back New England titles and earning all-state honors along the way. In 2012, he attended Hartford before transferring to BC for his sophomore season. But things didn’t get easier from there.

Ampadu was forced to sit out his during first year under head coach Ed Kelly due to transfer rules, but returned to anchor an Eagle defense that was among the best in the conference. After his junior year, an ankle injury kept him sidelined for six months, leaving many to wonder if Ampadu would be the same player for his final year of eligibility.

With a two-goal performance against No. 23 SMU in the third game of the season, Ampadu erased any such doubts. The second goal, a 30-yard strike that proved to be the game-winning blast, was particularly convincing.

“It feels great, I’ve been injured the whole summer. I’m working my way back—I’m still not 100 percent yet—and to get these two goals feels good and it gives me a boost for Sunday,” Ampadu said after the 4-2 win.

The September victory also marked my first time covering a game for The Heights, and my postgame chat with Toby was my first interview for a college newspaper. Nervous as hell, I stumbled toward Ampadu after the game to ask him a few questions, only to be greeted by his infectious smile and refreshingly authentic personality.

To me, it’s no surprise that Ampadu has decided to try to keep playing in America, despite the obstacles, given his bubbly passion for soccer. The sport has handed him a ticket to the land of opportunity and a degree from a prestigious university. Why quit now?

As a defender, there’s nothing flashy about his style of play, and his career stats don’t jump off the page (four goals, three assists). But to overlook his journey and personality would be to ignore two aspects of the Ghana native that make him so effective as a player. As Kelly can attest, Ampadu is one of the hardest working people to come through the program in recent history.

And even though signing a foreigner like Ampadu could mean extra paperwork or logistics issues for an American soccer club, it shouldn’t deter a team from taking a chance on an international player. For Ampadu, his Ghanaian roots aren’t inconvenient—they are his biggest strength, an indicator of his character, and the reason why the NASL and MSL should gamble on this kid.

ed kelly atobra ampadu Toby Ampadu joshua yaro
Dancing Kings: Sitting Down With the Boys of BC Dance
‘Learning How to Drown’ Proves Love is No Myth