Home » Eagles Move Back Into First Place With Win Over Vermont 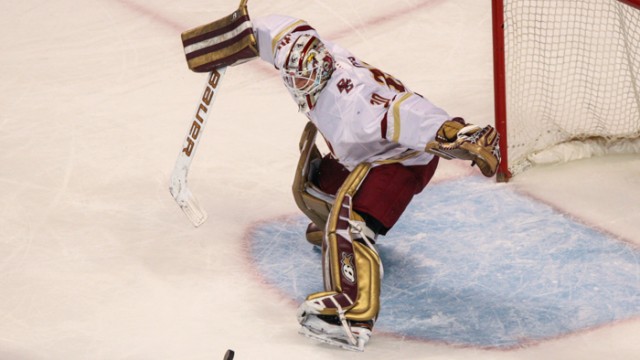 Eagles Move Back Into First Place With Win Over Vermont

The puck dropped in Burlington, Vt. to begin the first of the two-game series for Boston College men’s hockey with the University of Vermont. A mere 15 seconds later, the Eagles were climbing upward.

On the first faceoff, Jonathan Turk got possession of the puck, and sent it hurtling past an unprepared Thatcher Demko. Suddenly, the Catamounts were leading the Eagles, 1-0.

It didn’t take long for BC to remind Vermont why it is No. 2 in the country.

The Eagles (22-4-5, 13-1-5 Hockey East) struck back immediately against Vermont (12-7-3, 6-10-3) in a 3-1 final, giving them a first-round bye in the Hockey East Playoffs. Special teams were integral in this matchup, with 13 total penalties during the game. But the Eagles knew how to take advantage, notching two power-play goals. And after the first goal, Demko returned to his winning form, perfectly backstopping the talented BC defense, while the Eagles’ No. 3 offense was too much for UVM freshman Packy Munson.

About five minutes after the Catamounts’ goal, Miles Wood skated up the ice. Wood wristed the puck towards Munson, but couldn’t get it past him. The rebound, however, made its way toward Austin Cangelosi. The junior’s hard shot knotted the game up for the Eagles, giving them their only even-strength goal of the night.

Not long after, in the first period, a penalty on Dan Senkbeil for hooking gave the Eagles the one-man advantage. It took a mere 21 seconds into the power play for BC to get the lead. Zach Sanford dished the puck past a distracted Munson for what would prove to be the game-winning goal.

After the goal, Yvan Pattyn received a penalty for slashing, exemplifying the aggressive, penalty-riddled minutes to come. While the Catamounts tried to take back the lead with their physical play after the penalty expired, the Eagles’ defense prevented them from doing so. The Eagles capitalized on Catamount turnovers and converted them into scoring chances.

UVM’s closest scoring chance late in the first came off a hooking penalty on Colin White at 13:58. Demko kicked away a Catamount shot, and Mario Puskarich picked up the rebound. Puskarich then fired the puck, which ricocheted off the goalpost.

Ian McCoshen almost gave it back. The fiery BC defensemen earned three penalties for different infractions—high sticking, elbowing, and interference—in the span of 10 minutes at the end of the first and beginning of the second. Though the Eagles maintained control of the puck for much of this part of the game, having to play with a man down prevented them from increasing their lead.

As the Eagles killed the penalty, Pattyn was given a penalty for high sticking. BC used this opportunity to score its third goal. Sanford passed across the ice to team captain Teddy Doherty, who was waiting at the back door. The score was 3-1, and that was the way it would stay. UVM tried to get scoring chances during two more penalties on BC, but could not deliver on rebounds from Demko.

Despite two more penalty kills for the Eagles in the third, the Catamounts had sealed their fate. BC’s perfect 7-for-7 penalty kill gave the team the win and the first-round bye. It wouldn’t be the only good news the Eagles received on the night, however. With Providence’s 3-2 overtime win over Notre Dame, BC is back in first place in Hockey East by a one-point margin.