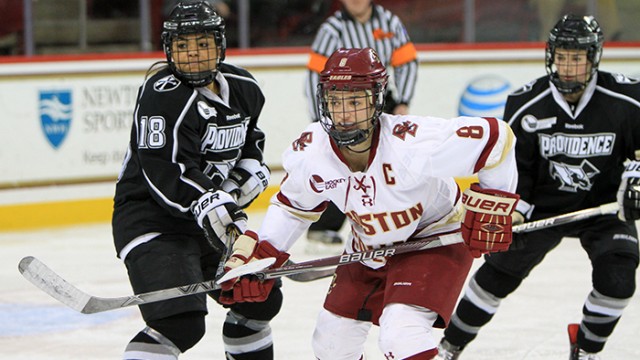 The Eagles (33-0-0, 23-0-0 Hockey East), the celebrities of the women’s hockey world this season, crushed Providence later in the night, 7-1. Nearly all of BC’s seniors contributed to the win, with Trivigno leading the charge in the offensive onslaught against the Friars (10-21-1, 6-15-1).

The Eagles didn’t wait to start the scoring, rapidly firing off shots early in the first period. Skarupa passed the puck onto Carpenter, but she shot too high and it hit the post. Finally, Trivigno slotted the puck past one of Providence’s own seniors, goalie Sarah Bryant. It slowly trickled past her glove and into the far corner of the net. The goal went under review due to a potential high-sticking call, but the referees let it stand.

Throughout the game, BC proved how effective it is not only offensively, but also on the penalty kill. After Tori Sullivan landed in the box for checking, the offense carried on like nothing had happened. Skarupa and Carpenter streaked up the ice, passing back and forth until Carpenter took her shot, but it hit Bryant’s left shoulder. Later, when Grieves served a penalty for too many players on the ice, the Eagles still actively tried to score despite being down a skater. The Friars barely controlled the puck when they entered the offensive zone.

With five minutes left in the period, Providence got back at the Eagles, when a shot from PC captain Lexi Romanchuck from the point escaped the grasp of Katie Burt. The netminder has racked up 13 shutouts this season and has a goals against average of 1.15, a likely indicator that that the Friars’ first goal would likely be their last.

BC did not keep the score tied up for long, when Providence’s Lauren Klein got called for hooking. Facing the power play, Toni Ann Miano took a pass from Trivigno to sneak her own shot past Bryant.

In the last two seconds of the period, Megan Keller landed in the penalty box for checking. The Friars, however, could not capitalize during the remaining 1:58 of the second period. Providence received its own penalty soon after, and Hockey East’s all-time greatest dynamic duo Carpenter and Skarupa wasted no time in taking advantage of it. Carpenter passed to her fellow senior, who nailed the shot in between the goalie’s stick and the right post.

The Eagles ran away with the lead after their third goal. Carpenter and Skarupa switched roles to give Carpenter her 38th goal of the season. Originally thought to be scored by Keller, whose shot from the blue line overwhelmed Bryant, the puck went off both of Carpenter’s skates, landing just inside the goal.

Immediately after the goal, Providence head coach Bob Deraney pulled Bryant and replaced her with Allie Morse. She did not fare better than her counterpart. Kali Flanagan shot from the point and launched it into the back of the net, giving Morse no chance to save it. Later in the period, Keller collaborated with Trivigno for her second goal of the night. Keller made a perfectly executed pass to a wide-open Trivigno, who shot it backwards and into the goal.

Head coach Katie Crowley opened up the third period by substituting Burt for Gabri Switaj, who has seen action in seven games this season. She saw only eight shots on goal while Burt saw six plus the goal, adding up to a meager 15 for Providence. The Eagles, on the other hand, barraged the Friars’ goalies, notching seven goals on 55 shots.

Miano earned another goal when she redirected Skarupa’s shot, slipping the puck past Morse for the final score of 7-1. Providence had several power plays in the period, but failed to use them to decrease the lead.

Crowley praised the seniors for their abilities and values on and off the ice. “They’ve been tremendous to our program, and I think it’s great for our younger players to look up to them,” she said.

Though several of the goals and major plays came off the sticks of seniors, the match showed promise of what the team will be like next season. Miano and Keller, who are both sophomores, were just a few of the underclassmen who contributed, and their performances convey an easy rise to leadership roles on the team in the future.

After the game, the red carpet made another appearance when the Eagles received a trophy for claiming No. 1 in Hockey East for the regular season. If BC wins its next game in the series against Providence, it will be the first team in Hockey East to go undefeated. For Trivigno, the pressure to remain perfect lies in the ability for the team to not get ahead of itself.

“We’re just trying to look at every day as a new day,” she said.

Based on this first game in the home-and-home series, it looks like the red carpet may be rolled out yet again at Kelley Rink.

Eagles Move Back Into First Place With Win Over Vermont
IT Department Investigating Email Virus Sent to BC Students, Faculty