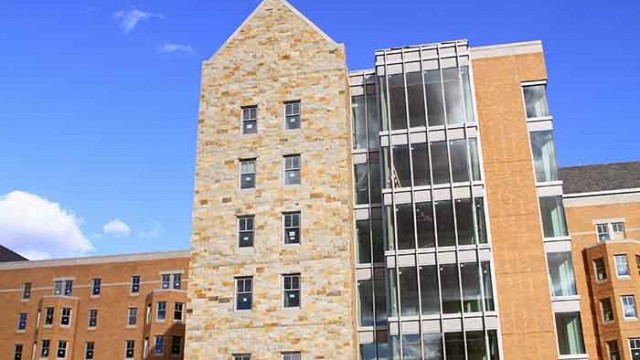 RIP Edmond’s. The possibly asbestos-ridden, leaky, sad excuse for a dorm is currently housing its last set of residents ever. Come Fall 2016, BC will debut two new dorms, 2150 and 2000 Comm. Ave.

As The Heights reported earlier this year, Boston College has a goal of meeting 100 percent of the demand for undergraduate housing, according to University Spokesperson Jack Dunn. Even with the destruction of Edmond’s, the new dorms are going to help accomplish part of this goal.

Many people are familiar with 2000 Comm. Ave. as an off-campus housing option. The University purchased the property, and it is currently under construction to transform the dorm to BC housing standards. 2000 Comm. Ave. will be composed of apartment-style dorms, featuring 540 beds configured into both single- and double-person rooms.

The pool will be replaced by an outdoor common space, and the balconies will not be available for student use. While much of the building will look the same as it did when it was an apartment complex, there will be added lounges and study rooms, just like all of the other BC dorms have.

This dorm will offer the unique experience of living “off campus,” while still having the benefit of living in University housing. Located right across from South St., the dorm will be in the middle of the off-campus action. There is a bus stop right in front of the building, but it is only a short walk to campus. This could be especially attractive to juniors with four years of housing who don’t want to deal with off-campus leases, but would like the experience of living in an apartment-style building near the majority of the junior class. Unlike traditional off-campus apartments, this dorm will still be staffed by BC residential assistants.

Anyone who’s spent any time on Lower Campus this semester has certainly seen (or heard) the construction of the highly anticipated new building, 2150 Comm. Ave. This dorm will likely house seniors, with 490 beds spread between 60 six-person and 16 four-person suites. The suites will feature full kitchens, essentially replacing the suite styles that will be lost with the destruction of Edmond’s.

The dorm will also house a new University Health Services clinic. It will have 12 examination rooms, five patient rooms, one isolation room, and one treatment room, with other specialty rooms as well.

In addition to Health Services, the dorm will have 15 study rooms and five lounges. There will also be a cafe, a seminar room, and three soundproof music rooms.

If the in-house amenities aren’t enough to convince you, the dorm is right across from El Pelon and Crazy Dough’s. Also, some of the rooms will overlook the graveyard, a fun backdrop for Halloween parties.

It isn’t the Mods, but at least there probably won’t be any mice. 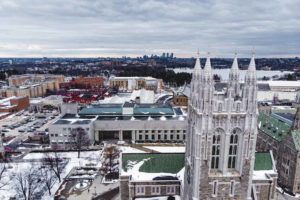