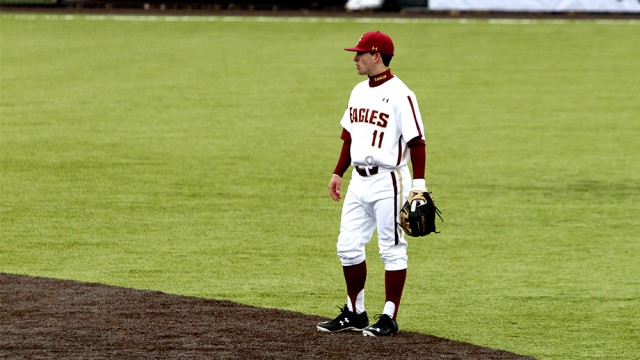 Along with the return of the long-awaited rising temperatures and increased daylight comes the revival of our nation’s pastime. With high hopes and a clean slate, Boston College baseball left Friday morning in search of kinder climates, as they travelled to Glendale, Ariz., to meet the Northern Illinois Huskies for their first four-game series of the season.

Birdball, as the team has come to be identified, begins the year hoping to build off a successful 2015 campaign, in which it ended up with a 27-27 overall record. Despite finishing last in the Atlantic Division of the ACC with a conference record of 10-19, the Eagles’ 27 wins were good enough to attain their first .500 season since the arrival of head coach Mike Gambino in July 2010. Birdball leapt at its chance to continue to build momentum and herald respect as a legitimate competitor in one of the nation’s most formidable baseball conferences with an opening weekend sweep of Northern Illinois.

To call Sunday’s matchup a “game” would be overly kind. A much better term to describe the events that unfolded Sunday afternoon would be “massacre.” The Eagles were completely dominant on both sides of the ball, as they left an unmistakably bitter taste in the mouth of the Huskies, throttling their opponents in the series finale, 17-0.

After scoring two early runs in the second inning and chasing NIU starter Ryan Olson after only two innings pitched, Birdball opened the floodgates, putting up a whopping 11 runs on the Husky bullpen in the third and fourth innings.

There is a saying among those in the baseball community, and its validity was evidenced Sunday: “walks kill.” The NIU staff surrendered 11 walks in the contest. In fact, BC only had three extra-base hits on the afternoon. Free passes combined with timely hitting from a BC squad, which boasted base hits for every batter in the starting lineup, was enough to put the contest well out of reach early on. Seven of BC’s nine starters had an RBI, with seniors Gabriel Hernandez and Joe Cronin plating two runners each. One Eagle, however, reigned supreme, as senior Logan Hoggarth produced a whopping five RBIs on the day in just three at-bats.

For the second time in the series, the Eagles’ pitching staff kept the Huskies off the board as five arms combined to give up only six hits and three walks. Freshman southpaw Thomas Lane started his collegiate career with a dazzling five-inning shutout performance, letting up only four base runners on two hits. A revolving door of effective BC relievers kept NIU off balance. Each pitcher registered one scoreless inning inning en route to preserving the club’s second shutout of the season, and completing the series sweep.

On Saturday, the Eagles started strong and continued to persevere through a long day in the strong Arizona sun to take both games of the double-header, 5-0 and 2-1, respectively.
The dominance of the BC pitching staff was put on display during Saturday’s double-header as eight Eagle pitchers combined for 18 innings of one-run baseball.

The second game of Saturday’s double-header proved to be the most hotly contested game of the weekend.

Starting pitching for both teams was strong as the game remained scoreless into the fourth inning. It was a remarkable debut for freshman Jacob Stevens, who gave up just two hits through six scoreless innings of work.

After a single and a hit-by-pitch, junior Johnny Adams finally broke open the scoring with a single to plate fellow junior Michael Strem. A fielder’s choice off the bat of senior Stephen Sauter later in the inning would allow Adams to score, putting BC up 2-0 after four frames.

The two clubs would continue to duel zeroes until the eighth when the Huskies rallied to create some late-game drama. With two outs in the eighth, BC reliever Sean Hughes surrendered a walk to NIU senior Alex Smith. Smith was subsequently driven in by a double from fellow senior Justin Fletcher. With a runner in scoring position in a one-run game, Gambino called to the bullpen and brought in sophomore Donovan Casey. With ice water running through his veins, Casey fanned the next hitter to move the game to the ninth, where he would complete his four-out save and seal the win.

The tone was set in the first game by senior left-hander Jesse Adams, who submitted six scoreless innings before handing the ball over to a more than capable BC bullpen. Gambino chose to once again use a committee of relievers for one inning each. The trio each took care of business without drama and sealed the deal with three innings of scoreless relief en route to a comfortable win.

Offensive support was provided by two RBIs apiece from Cronin and sophomore Jake Palomaki. It was a frustrating game offensively for the Huskies, who failed to find timely hitting, stranding eight runners on base.

The series began Friday with 5-1 win for the Eagles, featuring a dominant showing from junior right-hand pitcher Mike King, who surrendered just one hit and three base runners in a scoreless seven-inning gem. King looks to be picking up exactly where he left off last season, as he led the team with a 3.03 ERA making eight starts (out of 14 total appearances) in the final eight weeks of the season. He was relieved ably by sophomore Brian Rapp, who closed the door on the Huskies, tallying six outs while surrendering only one run.

On the offensive side, Birdball was powered by freshman designated hitter Gian Martellini, who in just his second career at-bat, launched a three-run home run over the left field fence. The 3-0 lead was added to by RBIs from junior Nick Sciortino and Cronin. Five runs proved to be more than enough to propel the Eagles to a decisive opening day win.

All around, it was an immaculate opening series for the Eagles, who are 4-0. This is the best start to a season in the Gambino era.

Offensively, the Eagles put up 7.25 runs per game, with contributions coming from the top of the lineup to the bottom. Huge five-RBI weekends for Cronin and Hoggarth tie them for the club lead. Five other Eagles, however, had multi-RBI series, making this BC lineup look formidable and potent.

By surrendering only two earned runs in 36 innings pitched, Birdball’s pitching staff has earned itself a 0.50 earned-run average to start the season. Even more shocking is the fact that every single pitcher on the roster made an appearance.