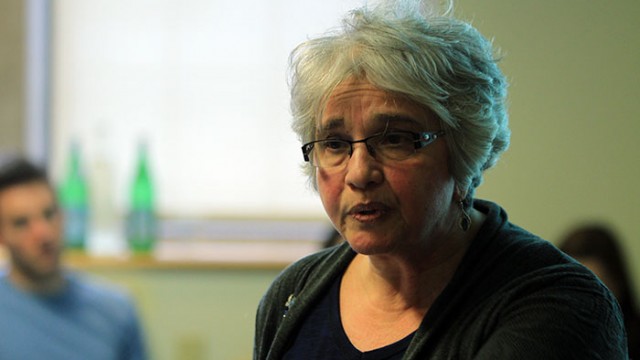 When Elvira Di Fabio of Harvard University learned that most of her senior undergraduate students had never set foot in their campus art museum, she came up with a teaching strategy forcing them to see the grand exhibits. Peculiarly, as the museum’s staff noted, none of the students spoke English.

Last Friday afternoon, Italian professor Di Fabio spoke to romance language instructors and graduate students about the educational use of art for developing foreign language competency, as taught in her own original course. A workshop period showing one of the dynamic teaching strategies followed the lecture. Di Fabio is senior preceptor in romance languages and literatures at Harvard, as well as a former member of the development committee for Advanced Placement Italian. The director of the Education Council of Boston’s Italian Consulate also attended the event.

Di Fabio sought to correct the misconception that the Harvard Fogg Art Museum is undemocratic by integrating museum visits into her pedagogy.

Di Fabio succeeded in instating arts integration in the fourth semester of language study at Harvard. She described the benefits of the program as inducing high-order thinking, facilitating more holistic language learning, and demonstrating the intersection of disciplines. She dubbed it democratic as it does not assume any previous art history expertise.

Her time spent with the College Board working on AP Italian influenced her class structure profoundly. The exam tests three types of engagement—interpersonal, interpretive, and presentational—through multiple facets.

“I’m asking them to go into this new academic space, a space that is unlimited both physically and metaphorically, and to start using their language in that new space.”

The Harvard course includes four to six actual visits during the semester, alongside pre- and post-museum tasks. The first visit includes an Anteprima, where a docent leads the students on a museum tour. Harvard even has Italian-speaking guides that allow the Anteprima to happen in the class’ target language. Museum visits also include Italian practice through small group discussions and tasks, observation, and short presentations. The students even download Italian audio to their smartphones to use.

The course also requires that students make a Vademecum, the Latin word for handbook, with their various writing exercises. The final projects ideally serve as museum guides in the class language.

Di Fabio expects her method to have several positive results distinct from a typical language class. Describing paintings off the cuff allows for authentic expression in the target language. The students also exchange creative ideas and learn about art history in the process. But Di Fabio, just as in her initial thoughts about constructing the course, made sure to stress the importance of the students gaining a new pedagogical space.

“I’m asking them to go into this new academic space, a space that is unlimited both physically and metaphorically, and to start using their language in that new space,” she said.

The workshop section allowed Di Fabio to demonstrate, and others to try, one of her teaching methods, called visual thinking strategies or VTS. She showed a piece of art and made the group sit in silence for minutes to observe it. Then, she asked three questions, the next only after the former was answered—“What’s going on in this picture? What do you see that makes you say that? What more can you find?”

She stressed that the teacher should repeat students’ comments, validating their thoughts and correcting and expanding their language, as well as pointing to the responder, listening well, and remaining neutral. With the wealth of visual information on the Internet, such an activity could even be done without a museum. The important things are language development and exchange of original ideas.
“We don’t all think the same, even in the same language,” Di Fabio said.

But even despite her rigid technical basis for her work, Di Fabio emphasized the philosophical importance of learning a second language, remarking that multilingualism bridges ideas. She distinguished between communicative and symbolic competence, the discussion of ideas versus their extraction and conception.

“It’s a conversation between me and me,” Di Fabio said. “Many of the students will never go to Italy or France or Spain, or any of the target language [countries] that we teach. So why should they learn at all? Because there’s another person inside them.”