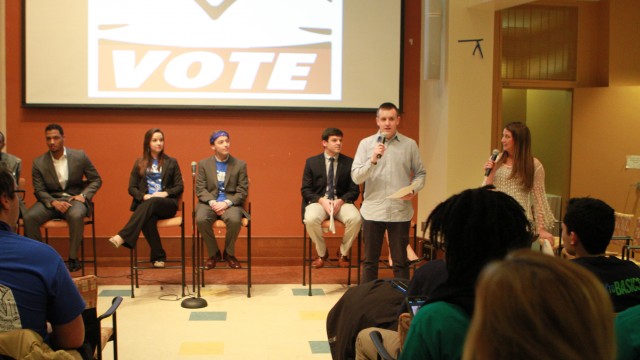 The Elections Committee announced Tuesday afternoon that it is extending the Undergraduate Government of Boston College’s presidential candidate nomination deadline to allow other candidates to run against the only team currently in the race, Anthony Perasso, LSOE ’17, and Rachel Loos, MCAS ’18. The new deadline is Tuesday, Mar. 1 at 12 p.m.

Two teams—Russell Simons, MCAS ’17 and Meredith McCaffrey, MCAS ’17, and Nikita Patel, MCAS ’17 and Joseph Arquillo, LSOE ’17—have already collected the necessary 250 student signatures to be added to the presidential ballot.

“We know that the daily life of most BC students does not include UGBC,” Arquillo said in a statement. “As an organization for dialogue and discourse across the University, we want UGBC to help students engage with the student government, administrators, and policymakers about issues that they are passionate about.”

The elections will now take place from Mar. 15 until Apr. 1. The Committee is also allowing new nominations for the Student Assembly in addition to UGBC president and executive vice president.

The Committee’s decision comes after current executive vice president Olivia Hussey, MCAS ’17, dropped out of the presidential race on Saturday due to personal matters. The Elections Committee decided to postpone the Election Kickoff until further discussion could take place. With Perasso’s encouragement, the Elections Comittee decided to extend the nomination deadline to ensure fair competition within the election.

Simons was interested in running for president earlier in the semester, but decided against it to support Hussey and McCaffrey’s campaign. Once Hussey withdrew, Simons decided to run to continue their vision.

“Our hope for next year is to serve Boston College students by re-engaging the student voice,” Simons said in a statement. “Meredith and I want to focus on building stronger relationships across the university that will allow for constructive action on issues facing BC students.”

All new candidates will be held to the same standards as previous candidates, including attending mandatory meetings, the Committee said.

The UGBC presidential race initially started with three teams—Perasso and Loos, Hussey and McCaffrey, and Elizabeth Foley, MCAS ’17, and Joseph McCarthy, CSOM ’17. Foley and McCarthy dropped out of the race Feb. 15 due to personal matters.

The Elections Committee declined their request, which was then appealed by Arquillo, who was originally Foley and McCarthy’s campaign manager. Arquillo wanted to run for president when Foley and McCarthy dropped out. His appeal was rejected until Hussey and McCaffrey exited the race on Monday, and they felt that there was insufficient competition with just one remaining team, the Committee said.

“When Arquillo appealed, we had two legitimate presidential teams running,” the Committee said.. “Thus at that time, we had a competitive election season in our eyes. Once Olivia suspended her campaign, however, we only had one legitimate team left. Without another team, we felt that there was a lack of proper competition in the elections. Therefore, we decided to reopen the elections.”

There is precedent for the Committee’s decision, which occurred in the UGBC presidential election two years ago. The team consisting of Nanci Fiore-Chettiar, GSSW ’16, and Chris Marchese, BC ’15, was running unopposed. Fiore-Chettiar and Marchese also encouraged the Elections Committee then to reopen the nominations and allow more teams to run to ensure a fair election.

In light of the events surrounding this election, the Committee has also decided to revamp the current Elections Code, to ensure fairer elections in the future.