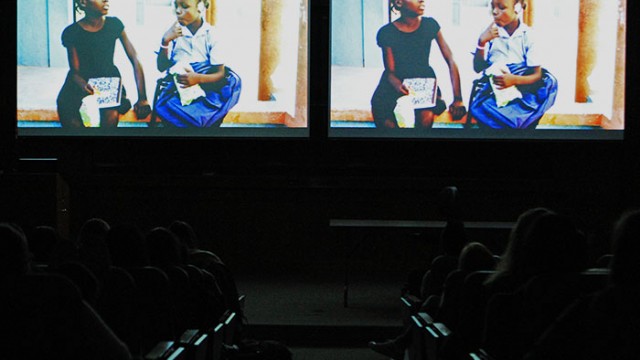 Wadley was eight years old when she and her mother moved into a tent in Port-au-Prince, Haiti. The Jan. 10, 2010 earthquake destroyed her home and her school.

Her mother no longer had enough money to send her to the temporary school set up in the tent town. She spent her days traveling to a well with a bucket to collect water while her mother walked around town, looking for lost friends and family.

Wadley, determined to go to school, took a seat in the outdoor school with her notebook and a pencil. Even though her teacher sent her home the first day because her mother had not paid for school, she continued to go back until her teacher finally let her stay.

On Tuesday night, Medicine, Education, and Development to Low Income Families Everywhere (MEDLIFE) hosted a screening of Girl Rising, a documentary following the lives of girls, including Wadley, across the globe in the pursuit of education despite gender and financial barriers.

“We’re trying to touch more on education here,” Kayla Daniell, the chair of education for MEDLIFE and MCAS ’17, said. “We really want BC to learn more about what MEDLIFE is and what we do and why these people need help.”

Suma, from Nepal, began working as a servant at the age of six. Her parents could not support her and needed her to start to make a living. At her first master’s house, work started at 4 a.m. She cooked, cleaned, and watched the master’s daughters, who made fun of her because of her dirty clothes.

Her second master, she said, called her “unlucky girl” and forced her to sleep in the goat’s shed in the backyard. She ate scraps of her master’s food and was beaten every day. Writing and singing songs, Suma said, was all that got her through this time.

“We’re trying to touch more on education here. We really want BC to learn more about what MEDLIFE is and what we do and why these people need help.”

– Kayla Daniell, the chair of education for MEDLIFE and MCAS ’17

There was a teacher at her third master’s house. Suma began to take night classes with other slaves where they would be able to talk with peers about the hardships they all endured. One day, her teacher came to her master’s house and told him that having slaves was illegal. He refused to listen, but the teacher was persistent, and Suma was eventually liberated.

Now, Suma lives at home with her parents. She works to get masters to release their slaves, just as her teacher did for her.

There are 66 million girls out of school across the globe, the film explained. Parents often cannot afford to send all of their children to school, so they will only send the boys. The girls, who are forced to work, face more violence, hunger, and disease. But if these girls were educated, there would be a high rate of return.

Senna, a 14-year-old living in a mountain village in the Andes in Peru, found inspiration in poetry. Her father was a miner, but he left his job after a near-death incident in the mine. Senna began to work in the public bathrooms, while her father worked as a cook, and her mother and older sister worked on the mountain.

She was, however, also able to attend school. Her father saw the importance of education—it would keep her out of the town’s brothels—and encouraged Senna to go to school, but her concern for her father’s poor health distracted her.

As her father’s health declined, Senna’s mother decided to take him to the bottom of the mountain to be examined by a doctor. He died on the journey there. Senna was devastated, she said, but she found hope and inspiration in a poem she read in school.

Senna found, she said, the power of words and began to memorize poems and write her own. Her family was the poorest family on the mountain, but she continues to go to school and now realizes why her father stressed the importance of education.

Amina, who lives in Afghanistan, was married to her cousin when she was 11 for $5,000. For the sake of her safety she chose to conceal her identity—she said her husband or her brother would kill her if they knew what she was saying in the film.

At her birth, she said, her mother was so upset that she was a girl that she cried and cast her aside in the dirt. Being born a girl cast her into a lifetime of servitude, Amina said. She has worked for her parents since she was three years old. She was able to attend school for a few years as a child, and she is determined to go back to school, despite having a husband and a child.

“If you try to stop me, I will just try harder,” she said. “Put me in a pin, I will climb out. If you kill me, there will be other girls who rise up and take my place. I will find a way to endure, to prevail. The future of man lies in me.”