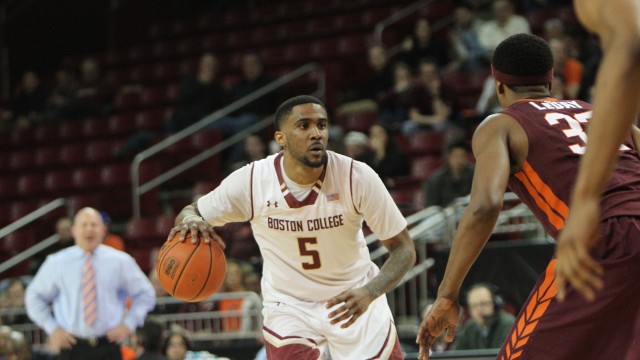 Eli Carter received the outlet pass from a rebounding Dennis Clifford and shifted into overdrive as he crossed halfcourt—it was just a minute into the game, and he still had plenty of energy. As he made his way into the key, he was confronted with a gaggle of defenders closing in on him. Carter was essentially going one-on-four, but he charged ahead anyway.

In one seamless motion, Carter took a quick step with his right foot to freeze defender Seth Allen, and gracefully cradled the ball above his head, switching from his right to his left hand. He pushed hard off his right foot, gliding from the edge to the middle of the lane before Allen could react—a perfectly executed Euro Step.

Before the defense—or even his teammates, who were still around midcourt—could react, Carter rose up to finish off a textbook move. Allen and his teammates attempted to swarm Carter in the paint, but help came just a split-second too late. The graduate transfer from the University of Florida rose up for the finish with a clean look at the rim, nothing standing between him and the first two points of the ballgame.

But Carter shortarmed the shot and left it on the front of the rim, where it bounced away into the waiting hands of Zach LeDay. Carter then fouled LeDay on a fast break on the other end, capping off a four-point swing for the opposition.

Boston College (7-21, 0-15 Atlantic Coast) got plenty of open looks against Virginia Tech (15-13, 7-8) Tuesday night. The Eagles ran players off screens to take advantage of the Hokies’ man-to-man defense all night long, and it worked—a majority of BC’s 28 three-point attempts were uncontested “gimme” shots.

For much of the game, BC head coach Jim Christian stood helpless on the sideline. His team was not losing for lack of preparation or gameplan—Christian’s offensive plan created countless open shot opportunities for some of BC’s most consistent shooters from the field. But as shot after shot from player after player clanked off the rim, there were few adjustments at Christian’s disposal. He called timeouts, he made frequent substitutions, he lectured players on the floor, but he could do nothing to add to BC’s score other than shoot the ball himself.

“We’re all frustrated,” Christian said after the loss. “Especially when we go 1-for-15 from three at home. Those are open shots.”

The team’s postgame demeanor, however, might suggest otherwise. As the final note of the Alma Mater rung out, and as the drum kicked three times to indicate the beginning of the Fight Song, the team metaphorically limped off the floor with heads drooped and spirits obviously beaten.

Virginia Tech, for its part, played well and took advantage of BC’s shortcomings. Allen led VT’s balanced scoring attack with 14 points on 4-of-9 shooting. Justin Bibbs and Kerry Blackshear, Jr. were not far behind at 12 and 10 points, respectively.

Now with only three games remaining on the 2015-16 schedule, BC’s chances to avoid college sports infamy are limited. If the Eagles lose all three—and they’re underdogs in each of those games—they will become the first Division I program to go winless in conference play in both football and basketball in a school year in the post-World War II-era.

But not only now is it a question of talent—it is also a question of effort. The injury-depleted Eagles will likely have to play twice as hard just to be at even footing with ACC competition, and that’s a lot to ask of a team that has lost 15 consecutive games. The option to “check out” and coast through the remainder of the season is enticing, and from the fan’s point of view, it seems as though some players have already chosen that option.

The loss to Virginia Tech came down, quite simply, to a lack of execution. If the Eagles continue to miss open shots, team morale will unquestionably drop, putting BC in prime position to make history for all the wrong reasons.