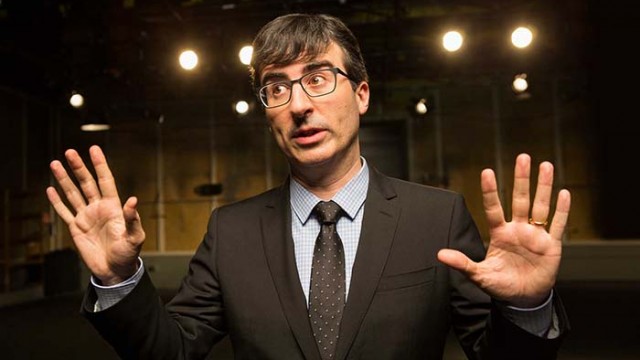 Taking one of his many comedic breaks from his serious discussion on abortion laws in some states in the U.S., John Oliver elaborated on the worst way he can imagine dying.

While many began watching Last Week Tonight thinking, “I’ll check out the show with the British chum from The Daily Show,” if Oliver has proven anything in the first two seasons of his program, it’s that he certainly made a name for himself apart from being Stewart’s sidekick. Especially with Stewart’s bowing out on The Daily Show last August, Oliver has filled the hole left by his spiritual predecessor rather well. With a slew of late-night programs airing every weeknight, Last Week Tonight offers a unique, accessible, and poignant program once a week that tackles, in extreme and cautiously accurate detail, one major political or societal issue, alongside a few big stories from the week’s news.

Oliver’s placement on HBO is probably his biggest and most utilized asset. At that network, there is very little Oliver isn’t allowed to do on-air. He can swear as much as he likes, insult whoever he wants. He also has a noticeably high production quality compared to his cable-television colleagues. While Bill Maher, another HBO late-night host, holds all of these same benefits, Oliver uses them to make a much more engaging and inviting program than Maher, whose passionate political beliefs often mar his likeability.

Within the realm of political late-night programs, comparatively, Real Time with Bill Maher, The Daily Show with Trevor Noah, and The Nightly Show with Larry Wilmore are all overly opinionated. If you watch too much of any of these programs, it’s easy to be sucked into an opinion that doesn’t give itself enough of an evidential backing as Oliver’s Last Week Tonight gives its viewers. It seem like Wilmore and Noah are overly critical of right-leaning politics, and do not easily concede points that go against their obvious political beliefs. Sure, Noah might make fun of Hillary Clinton’s hand motions during a debate, but rarely does his program analyze the Democratic candidates’ political stances with the same fervor as it does with candidates like Marco Rubio and Ted Cruz.

Sure, all of these programs, including Last Week Tonight, are built on political opinions, but often, Oliver presents his program with as much of an unbiased air as possible and focuses less on weekly battles between politicians and more on conceptual societal issues. In last week’s episode, Oliver discussed abortion laws in states like Mississippi, Alabama, Louisiana, and Texas. While it was obvious that Oliver is against these laws, he attacked them in a calm, sophisticated manner, analyzing in detail the points their proponents make in their defense, and pointing out the hypocrisy and unnecessary nature of some of their claims. He also presented many case examples of patients’ lives that were seriously affected by these laws’ restrictions in their states. Sure, Oliver’s views on abortion were obvious throughout the segment, but it never sounded like he was preaching his own opinion, as other late-night hosts like Maher and Noah often do.

Oliver’s method of crafting a detailed, 20-minute argument, as well as his ability to surround some very serious topics with both relevant and irrelevant humor give Last Week Tonight a unique format compared to the many late-night programs on TV. Entering his third season of Last Week Tonight, Oliver no longer needs to fear that his name doesn’t stand on its own two feet—though he has probably realized this for some time now. While in many respects and by many people, Oliver may be considered Jon Stewart’s protege and successor of political late-night, Oliver’s program stands wholly apart from The Daily Show in its determination to cover a story or issue with the utmost detail and least biased perspective possible.