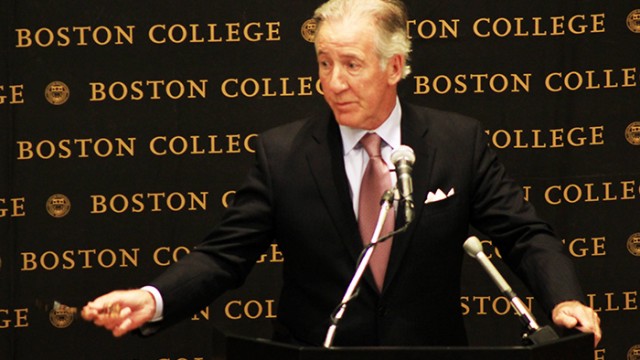 On Easter Monday in 1916, over 1,000 people swarmed to occupy strategic points throughout Dublin to declare an independent Irish republic. The aftermath of the so-called six-day Easter Rising saw nearly 1,500 men imprisoned by the ruling British, who executed the organizers while the offenders’ families stood within earshot. Irish citizens and descendants claim the event to be the first step toward Irish independence, a struggle that continued into the next 100 years.

U.S. Representative Richard Neal and Boston Mayor Martin Walsh, WCAS ’09, spoke in Gasson 100 about the Easter Rising of 1916 before its centennial. Neal also fielded questions about its historical background and political implications for the future, in an event sponsored by the Irish Studies Program.

Walsh was elected mayor in 2013. His parents emigrated from Ireland to Boston in 1956 and 1959, both from County Galway. His parents taught him Irish growing up and spoke it around the house, and he studied the Easter Rising on his own after hearing so much about it from his parents.

Neal, the representative for Massachusetts’ first district, has long been at the center of U.S.-Ireland relations. He currently serves as co-chair for the Congressional Ad Hoc Committee on Irish Affairs, and he worked toward an Irish Republican Army ceasefire in Northern Ireland in the 1990s. Through his grandparents, he has Irish heritage. Walsh, with his language ability, gave two speeches in Gaelic on one visit to the country.

Walsh spoke first, noting that he had to leave for an event immediately after finishing. He discussed the importance of the Easter Rising to him and his family, emphasizing that the underlying issue of the event was self-determination. Walsh lauded leadership figures like James Connolly, a socialist theorist and Rising organizer. Walsh said that their values and history originally inspired him to pursue public service and connected the Irish will for self-determination to the struggles in the countries from which people immigrate to the U.S.

Neal then took the stage, beginning by narrating the events of the Easter Rising and describing the gruesome conditions of Irish treatment afterward. Ireland was Britain’s first colony and an experiment in colonization, a western island that could act as a military launching point. One principal division has emerged from religious differences between the Anglican Protestant British and Catholic Irish, accentuated especially during the Reformation years. But despite famine and subjugation, Neal said, the late 19th century before the Easter Rising was marked by cultural revival.

For all the Irish efforts, the Act of Ireland created a Northern and Southern Ireland in 1920, and the latter eventually became a sovereign state. Neal attributed Ireland’s successful transition to a free state to the Easter Rising, an event of political upheaval, as well as the intellectual contributions of Irish writers like George Bernard Shaw and James Joyce. Neal and Walsh both acknowledged the importance of Irish America to popularize the Irish independence movement abroad, as well as aiding in peacemaking efforts throughout the island afterward.

“Irish nationalism in America has always been stronger than Irish nationalism in Ireland,” Neal said. “It’s why we’re here. So we get the memory here. The harshness of what happened because of immigration and famine. We have all the stories here, even while the Irish in Ireland are down to business.”

When an audience member asked Neal about his visions for continued peace and stability in Northern Ireland, he said that the processes with which he helped—including the Good Friday Agreement, which allowed for the joint governance of Northern Ireland by the United Kingdom—should be kept intact. He also expressed his hopes to continue a close American-Irish political relationship, citing the fervent American-Irish support of the Easter Rising.

Neal presented an optimistic vision of Ireland’s future during the question-and-answer session. He predicted that the United Kingdom will likely be reluctant to participate in any centennial acknowledgement unless it falls to Northern Irish pressure. He also talked about the renewed Irish national confidence after overcoming politically and economically tumultuous times in the recent past.

“All of us in the global Irish diaspora have taken pride in Ireland’s history,” Walsh said, emphasizing the country’s continued worldwide support.