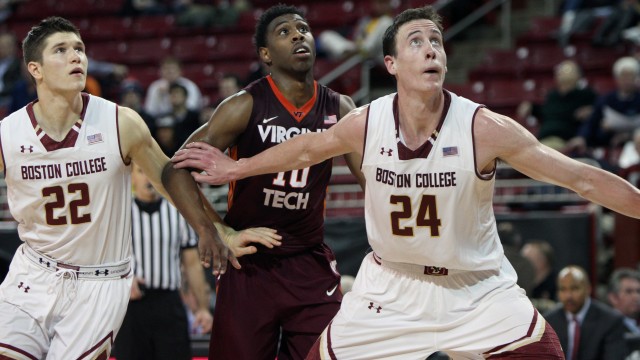 With just two seconds left on the shot clock, Matt Milon committed a cardinal sin, fouling a 3-point shooter and sending Virginia Tech’s Jalen Hudson to the line for a potential four-point play. Jim Christian looked on in shell-shocked disbelief, immediately pulling the freshman guard from the game.

“Hey boys, when are we gonna stop fouling 3-point shooters?”

His question reverberated around an empty Conte Forum, where the slightly more than 1,000 fans in attendance likely heard him as clearly as if they were having a conversation from across the room.

In a game that was as listless as the fans’ enthusiasm, BC (7-21, 0-15 Atlantic Coast) dropped Tuesday night’s game 71-56 to Virginia Tech (15-13, 7-8), prolonging the team’s fruitless quest to simply win a conference game. The Eagles played out of rhythm for most of the night, shooting just over 35 percent from the floor and tallying nine assists to 15 turnovers.

On the other end, effort and intensity waned on defense, especially as the first half wore along. Christian attributed the lack of intensity to the fact that his young players weren’t making shots on offense.

1.) Dennis Clifford’s Renaissance– Early in the season, Clifford struggled to stay within the flow of the game. He was often late on rotations, held the ball too long, and struggled to get shots up quickly around the rim.

But as his injury-plagued career at BC winds to its end, Clifford has been playing the best basketball of his career. Tuesday night he scored 13 points and grabbed 12 rebounds, his second double-double of the season and the fourth time in the last five games he’s had at least 13 points and 8 rebounds. He even tallied four blocks for good measure.

Offensively, Clifford worked efficiently off of pick and rolls. He got up off the floor quickly, something he has struggled with in the past, and persistently finished through traffic. He also had a put-back dunk late in the game, a sure sign that his body finally feels the way it’s supposed to.

Clifford also functioned as a very good distributor from the low post, with Virginia Tech electing to double him for most of the game. He spun away from traps and did well to keep the ball over his head and away from defenders. He moved the ball to both cutters and spot up shooters across the court.

“We’ve got to get him the ball more, to be honest with you,” Christian said after the game. “I thought we didn’t get it to him enough.”

His SportsCenter Top 10 moment was emblematic of the constant energy he provided to the team all night long. Owens just missed a double-double with nine points and 11 boards, five of which came on the offensive glass.

He utilized his athleticism on defense, chasing down loose balls and forcing turnovers. Offensively, Owens showed a more well-rounded attack than usual. He did tally his customary dunks—the aforementioned put back and a dunk off of a nice baseline cut—but he also drilled two jumpers, showing a bit of off the dribble creativity.

While those plays will never be Owens’ strong suit, developing a more competent jumper in the coming months will allow him to become a much more threatening offensive piece for the Eagles.

3.) Offensive Rebounding– Entering the game, BC ranked 346th in the nation in offensive rebounding rate, the lowest among Power 5 basketball teams. Though the team lacks reliable size outside of Dennis Clifford, the ranking is still surprising.

On Tuesday night, the Eagles attempted to make up for an entire season of not crashing the boards, compiling 14 offensive rebounds. While Owens led the effort, Clifford and Idy Diallo totaled a combined five offensive rebounds. Virginia Tech didn’t have substantial interior size for most of the night, and the two big men in the Eagles’ rotation took advantage.

The hustle plays allowed BC to keep the game competitive until late in the first half. While not something it can replicate on a nightly basis, this effort on the offensive glass is something that the team should be able to carry out for its remaining games. A few second-chance possessions could ultimately make the difference in stemming the tide of its losing streak.

1.) Eli Carter– Albert Einstein defined insanity as doing the same thing over and over again and expecting different results. In Carter’s case, his form of insanity is the contested, off-the-dribble 3-pointer.

Despite a promising 3-for-5 start from the floor, when he seemed to make a concerted effort to drive to the basket, Carter slumped to a 6-for-19 finish, largely owing to his infatuation with these impossibly difficult long-range shots from well beyond the 3-point line. He finished 2-for-10 on threes, and the fact that he scored 19 points was mitigated by the sheer volume of attempts needed to reach that mark.

In the absence of Jerome Robinson, Carter’s inefficiencies have become more glaring. With no one else around to soak up possessions, Carter will often aimlessly dribble away the last 10 seconds, before settling for a very low percentage attempt.

Additionally, while he can make good reads on pick and roll plays, the amount of offense he is forced to generate for the Eagles has exposed the fact that he is really better-suited as a secondary creator. Without Robinson, no one else is around to help ease his burden. As a result, Carter had just three assists to six turnovers, a largely unacceptable ratio for a starting point guard.

Defensively, he appears disengaged on certain possessions and spent a few transition possessions arguing with the refs in lieu of heading back down the floor.

2.) Transition Defense– Late in the first half, Virginia Tech used a 16-2 run to blow open what had previously been a 19-18 contest. In that run, most of the points came in transition and at the free-throw line, where the Hokies had 10 attempts.

For the season, Virginia Tech ranks fourth in the country in free throw rate, averaging nearly one free throw for every two field goal attempts. While BC managed to keep them off of the charity stripe early in the half, the Hokies asserted themselves during this run. Allen, whose 14 points led Virginia Tech on the night, had six of the 10 attempts. Virginia Tech shot 22 free throws overall.

“That stretch, we did a really bad job of transition defense and stopping the ball,” Christian said after the game.

BC committed a few turnovers that led to easy buckets on the other end, with a few bad fouls compounding the issue.

The inability to run back down the floor, identify individual matchups, and stop the ball from parading to the rim ultimately cost the Eagles the game.

3.) Gap in Bench Scoring– While BC certainly has a depleted bench now that Robinson and Turner are injured, it’s still reasonable to expect some help from the second unit every night.    Tuesday, the Eagles bench totaled three points on just 1-for-14 shooting. All of the shots were taken by either Hicks or Milon, many from long range.

The performance was particularly poor in light of the fact that the Hokies’ bench put up a robust 35 points.

While the Eagles ordinarily struggle to win conference games, the team won’t approach a win in the ACC until the bench can provide some reliable scoring, allowing the exhausted starters to obtain some much-needed rest.