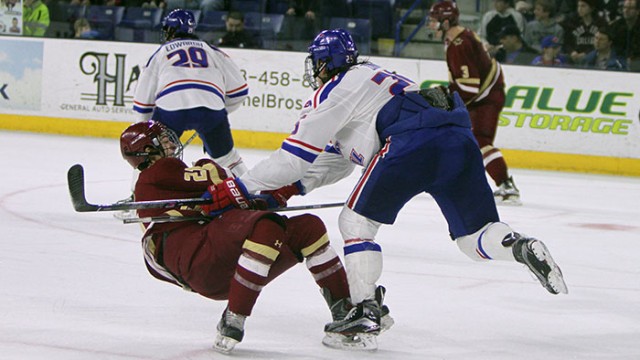 LOWELL, Mass. — Someone finally figured out how to slow down Boston College men’s hockey.

The Eagles, who were riding high after Friday night’s 3-1 victory against the University of Massachusetts Lowell clinched the top seed in the Hockey East Tournament, came up short in every way. They couldn’t convert on any of their four power plays. They struggled to keep the River Hawks from applying consistent pressure. And, perhaps worst of all, they failed to create virtually any legitimate chances of their own once they fell into a deficit.

Not the best way to close out the regular season.

After remaining undefeated through the first two months of 2016, No. 2 BC (24-5-5, 15-2-5 Hockey East) hit a roadblock at the Tsongas Center. No. 11 UMass Lowell (21-8-5, 12-6-4) came out strong with an aggressive forecheck to knock off the Eagles, 3-1, on its own senior night. With the victory and Boston University’s 1-0 loss to Notre Dame, the River Hawks earn the fourth seed and an all-important bye in the conference playoffs. On the other end, after Providence’s win over Massachusetts, the Eagles will have to be content with a share of the Hockey East regular season title—they will, however, still be the No. 1 overall seed by virtue of their 1-0-1 conference record against the Friars.

The Eagles couldn’t get out to a good start in the first period against Norm Bazin’s crippling defensive scheme. BC managed just five shots on goal in the opening frame, only one of which—a botched turnover reeled in by team captain Teddy Doherty that UMass Lowell goaltender Kevin Boyle stoned—was a legitimate scoring attempt.

On the other side, Lowell kept consistent pressure on Thatcher Demko. A mere two minutes into the game, Connor Wilson rung a shot off the post that was nearly mishandled. The BC goaltender couldn’t stay perfect for much longer, though. Midway through the frame, A.J. White spun off Demko after a deflection from Michael Louria’s shot. He sniped it just as Demko’s left leg was coming down to give the River Hawks an early 1-0 lead.

For the remainder of the first, the Eagles’ defense stood tall. BC survived a scary Lowell offensive stretch where both Michael Kim and Ryan Fitzgerald were missing sticks, while Steve Santini and Casey Fitzgerald expertly poked a few shots away during a power play as time wound down.

In the second, Demko showed why he deserves to be (at least) a Hobey Baker Award finalist. The Vancouver Canucks prospect knocked away several superb attempts by Lowell forwards. In one of his most notable, Demko went into a full split to kick away a shot by Ryan Dmowski. He then came back up into position to snag Dmowski’s snipe off his own rebound.

BC’s offense repaid Demko for his service, courtesy of its most dangerous line. Zach Sanford skated down the far side, deking the puck back and forth to draw three defenders on him. While he did, Casey Fitzgerald created space, allowing Sanford to dish the puck back to his defender at the point. Fitzgerald spun around and beat UML’s John Edwardh, feeding Alex Tuch at the bottom of the circle to Boyle’s right. The sophomore rocketed the puck past a diving Niklas Folin to tie the game up.

Still, the Eagles couldn’t get any consistent offensive pressure. BC managed a mere five shots in the frame—the goal among them—while Lowell kept the heat on Demko. Following the game, Jerry York lamented the lack of flow among his forwards.

“We weren’t sustaining our offense as much as we’d like to,” York said.

By the third period, BC’s already lackluster performance devolved into a complete disaster. Instead of coming out of the locker room in full force, the Eagles fell flat.

Gifted with a power play off a charging call on Folin, BC seemingly couldn’t handle the fresh ice. Lowell’s Tyler Mueller found a hole in the BC defense, taking advantage of a defender who fell down. He skated down and slotted the puck past Demko for a shorthanded goal. It was Mueller’s second of the season, and only the first BC has allowed all year. Five minutes later, Edwardh put the River Hawks up by two. The fourth-line forward received a feed off the deflection from a diving C.J. Smith before eyeing open air on Demko’s right.

For the remainder of the period, Lowell pushed back into Bazin’s patented punishing defense. The River Hawks skillfully slowed down BC’s game, using the forecheck to crush any offensive chances.

“If you come out of your zone clean, you have a chance to come out on the attack, but their forecheck prevented us from coming out smooth,” York said.

In the end, one team had more to play for on Saturday night. The River Hawks wanted the extra week off, while nothing the Eagles could’ve done tonight would have made their run for a sixth national championship any easier. And if it’s any consolation to the BC faithful, BU now won’t have any time to rest and must prepare for (an admittedly pitiful) UMass Amherst team next week.

Now it’s up to the Eagles to use the next 11 days of practice smartly and creatively. They must get healthy, and fast. Colin White sat again with a shoulder injury, Chris Calnan is still dealing with ankle issues, and Miles Wood spent some time in the locker room. If nothing else, it’ll give Demko some time off—the goaltender, fresh off double hip surgery in the offseason, has rarely gotten a chance to sit.

Because, if they have more performances like they did tonight, there won’t be many more games left in this season for BC.