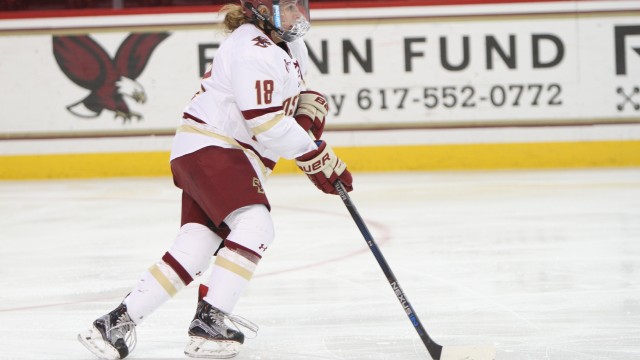 Small crowds of parents, children, and students surrounded the innermost ring of seats at Kelley Rink. In the back rows in one of the corners, Boston College’s pep band sat, readying itself for what, it likely gathered based on women’s hockey’s success this season, would be many rounds of “For Boston.”

Once again, as they have all season, the Eagles required that.

Early in the first period, Alyson Matteau tripped Dana Trivigno. The result sent Trivigno flying into the goal and crashing into the boards. What could have been a penalty shot for the Eagles only ended up being a power play, as Matteau was sent for two minutes in the box. BC, a team that usually can convert easily with the man advantage, failed to capitalize. Seconds in and down a player, Brooklyn Langlois slapped the puck from past the blue line, a shot that seemed almost unmissable for Burt. It bounced on the way to the goal, and the puck snuck past her, giving the Black Bears a 1-0 lead.

When Matteau landed back in the penalty box for another tripping call, the Eagles did what they couldn’t do earlier. Haley Skarupa shot high, in between the post and Maine goaltender Meghann Treacy’s right arm, evading her grasp. After the equalizer, the period continued with a back-and-forth of shots, but no results. As the Eagles made their way back to the locker room with the score tied, it seemed for a moment that there was cause for alarm. The pep band might have thought that its first rendition of the Fight Song would be its last of the game.

“We battled that first period,” BC head coach Katie Crowley said. “They got a sneaky one on that long shot.”

The beginning minutes of the second period would offer no comfort. The Eagles and Black Bears traded shots, to no avail. With 10 minutes left in the second, Trivigno finally shot one high past Treacy, giving BC its first lead of the game. She lifted her leg up in celebration and body-slammed the glass. Trivigno has been on her A-game in the latter part of the season, earning 12 goals and 13 assists since a Jan. 15 game against Merrimack.

“[Trivigno’s] a great player, and is I think sometimes overlooked when you have other people in your class like Haley Skarupa and Alex Carpenter,” Crowley said. “She’s done a phenomenal job this year as a leader and in the last month, scoring goals and putting pucks in the net.”

Trivigno’s celebration lit a fire under the Eagles, with BC notching another goal shortly after. A few minutes after the goal, Audra Richards got called for hooking, offering up another power-play opportunity for BC. Amid the traffic of several Eagles and Black Bears, Kenzie Kent pushed the puck past Treacy on the left side of the goal. With the goal, the Eagles have notched 41 power-play goals this season, a new program record.

Minutes later, Meghan Grieves replicated Trivigno’s shot—high up, over the shoulder—but from the opposite faceoff circle. Suddenly, BC was up 4-1.

What a difference 20 minutes makes.

Makenna Newkirk opened up the third period with a goal of her own just three minutes in, hurling the puck from the faceoff circle. It was the freshman’s 21st of the season.

Though by the halfway mark of the third period the game was mostly out of reach, tensions still flared on the ice. After a shot by Catherine Tufts, the forward crashed into Burt. The blow knocked Burt over, and groups of Eagles avenged the fall, throwing punches and pushing against Maine players. Four players were sent to the penalty box. Trivigno made her second trip of the night, this time for roughing, and slammed her stick against the glass as she sat down. After some deliberation by the zebras, Toni Ann Miano joined her in the box, also for roughing. Black Bears Brooke Stacey and Catherine Tufts landed in the box for roughing and charging, respectively. With both teams down two, they were still playing at even strength.

As the seconds wound down in the third period, the Eagles knew that nothing could be done against them. BC players rushed over to goalie Burt and gave her hugs, and Kaliya Johnson slammed her stick on the ice to the beat of the pep band playing the Fight Song one last time. With one more step closer to winning it all, the Eagles had something to celebrate.

“It’s exciting to move on to the semifinal game,” Crowley said. “We’re excited, and we’re looking forward to it.” 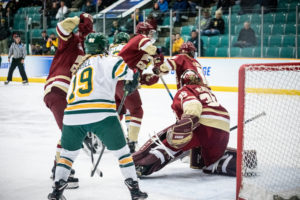