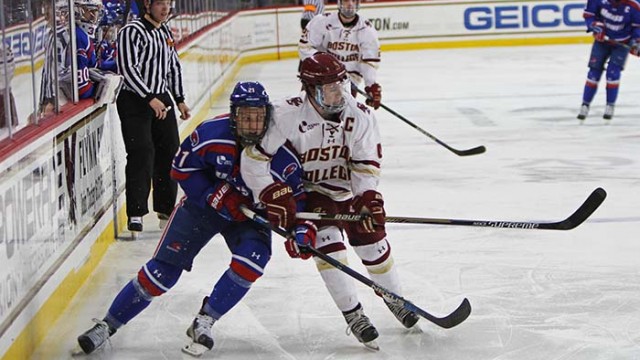 Too Many Penalties? Not Enough to Lose

When it comes to penalties, this season’s rendition of Boston College men’s hockey is like a Lamborghini that gets bad gas milage. It’s not going to change, but despite that one flaw, it’s still pretty sweet.

“We like to practice our penalty kills,” head coach Jerry York said sarcastically. “It is what it is. We have a penalty, we gotta kill it. If we have a power play, we gotta score a goal.”

York’s team is elite at doing the former, and it needs to be because of its penchant for going down a man. Entering Friday, BC was fifth in the country at killing penalties, but the Eagles thought they needed more practice. UMass Lowell had seven power plays on Friday night, including three in less than 10 minutes in the second period. The Eagles killed off all of them and won the game, because that’s what they do: take penalties and win games.

“I think we’ve got a good scheme [on the penalty kill],” York said. “[Assistant coach] Mike Ayers works extremely hard on film preparation and how to defend five-on-six, or four-on-five. […] It’s one thing to put it up on the board, it’s another thing to execute it. I thought we executed very well tonight.”

There’s a hockey mantra that your goalie needs to be your best penalty killer. Demko is the Eagles’ best penalty killer because he’s just their best player, but maintaining an elite prevention rate on such a high number of man-down situations takes more than an all-world goalie.

Lowell had a few prime looks in the second period and couldn’t convert due to Demko and some River Hawks misfires. For the rest of the time that Lowell was on the man advantage, which totaled nearly a quarter of the entire game, BC mostly stymied the River Hawk attack. Lowell got off intermittent shots on Demko, but the Eagles usually didn’t let Lowell get multiple looks in the same sequence because Ayers’ charges were always in good position. The forwards, from first-round picks like Alex Tuch and men-children like Miles Wood to freshmen like Christopher Brown and JD Dudek, pursue puckhandlers in the neutral zone and plant themselves in passing and shooting lanes in the defensive zone. The defensemen are tough, skilled, and smart. Freshman Casey Fitzgerald, in particular, embodied all those qualities during Friday’s contest.

Before the season, Teddy Doherty was looking forward to playing defense again. Thanks to Jeremy Bracco’s departure and a rash of injuries, the undersized captain is now a mainstay up front with hulking sophomores Zach Sanford and Tuch. BC’s lack of forward depth necessitated that change, but the seemingly odd threesome blossomed into one of BC’s most consistent trios. Tuch and Sanford are both monsters on the forecheck and skilled enough to create offense from a bevy of situations. Doherty’s skillset as a former blue-liner, but one that could initiate transition offense, rounds out the triumvirate. Those three produced another goal on Friday when Doherty banged in a rebound off the rush to give BC what was the eventual game-winner.

“They have good chemistry,” York said. “If you put three good players on a line, you’ll probably have a pretty good line. At least, history tells me that.”

York said that freshman forward Colin White, who missed Friday’s game with a shoulder injury, will likely miss Saturday’s rematch in Lowell. York added that he expects White back for the postseason. 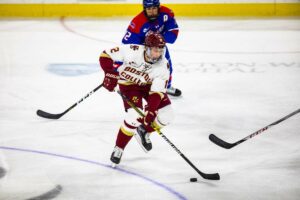 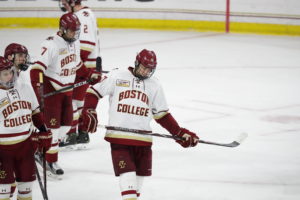