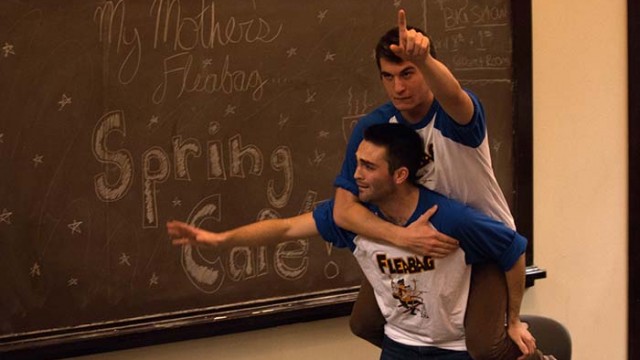 It’s 9:45 on a Thursday night and rainy and cold enough to keep the long walkways of Middle Campus bare. Yet in Gasson 305, a group of students steps through the doorway to find the seats already packed beyond capacity, the aisles full from overflow of the boisterous crowd. It makes do with sitting on the floor and settles in for the wait. This hyped-up scene is in anticipation of My Mother’s Fleabag’s Spring Cafe.

The widespread reputation of My Mother’s Fleabag as the upper crust of comedy troupes on campus naturally leads to high expectations. The cast itself proclaims this aspect of its ingenuity repeatedly throughout the show, a pride which could toe the line between feeling like an impressive reminder or a crutch for the hit-or-miss nature of improvised comedy, compared to pre-planned sketches. Yet as the show went on, it was clear the praise had been well-earned. Off-the-cuff stunts or silly storylines that might’ve fallen flat when juggled between ad-libbing actors of lesser confidence are elevated to something energetic and unique when performed by this cast of students, who show their support for one another in their unending commitment to the bit at hand.

Some of the best moments in the show are the most innocuous. Low-brow jokes find their own niche in the scenes, but it is the unpretentious gags that draw a genuine laugh from the room. The middle-school chess rivals Gary Fitzpatrick and Shannon Roberts hashed out their grudges in a tournament that fluctuated between Fitzpatrick’s guileless eagerness, Roberts’ absurdly false deep voice, and the complete lack of knowledge in chess shown by one actor who steps into the role of tournament commentator. It’s a simple shtick done well and with heart, and the same feeling can be seen in the absurdities of games like “My movie, my movie, my movie” or “185.” Each one hits its stride in the organic nature of the pursuit of a laugh, whether it is over the staging of a film titled Latvian Brotherhood or the search for the perfect punchline of a joke beginning with 185 flowers walking into a bar.

It is amid the sublime of stupidity that the cast’s natural chemistry shows through best. The lack of script offers the repeated opportunity for cast members to come to one another’s rescue at any opportunistic lull in the rapid-fire comedy. Rather than feeling stilted or rocky, a moment of pause often pivots the gag into new territory as the actors gain momentum off the unwieldy audience participants or each other. A game involving a volunteer coming out of the crowd to manipulate the paralyzed body parts of two actors on stage leaves viewers ready to cringe of secondhand embarrassment, but the performers keep the ball rolling with a well-orchestrated and elaborate search for an imaginary ping pong ball. In a bit involving a barbershop straight out of a nightmare, one of two hostages attempts to make a phone call out for help, only to falter on her cries for assistance. But all is soothed, to the sound of an enthusiastically approving audience, as her fellow captive reminds her with perfect timing that she has to dial a number first.

The games are not polished or perfect, but even the moments of true awkwardness or stumbling do little to faze the actors involved. At all times there is a level of self-awareness that keeps missteps from becoming uncomfortable, despite the number of attentive eyes aimed eagerly at the front of the room. No trick better demonstrates this mastery than “Bing,” a game involving one actor cast as the director of a scene in which the others perform.  This coordinator has full veto authority over his companions, “bing-ing” the actions or words they choose to use in order to force them into resourceful creativity. The results can be hugely entertaining, and allows the troupe to clearly and definitively edit its own performance in the moment for maximum payoff.

To reduce My Mother’s Fleabag to its unscripted nature is a disservice to a hardworking and creative group. Yet its in-the-moment cleverness and familiarity with one another’s strengths are truly what makes the performances memorable, and if not always smooth, an entertaining ride.