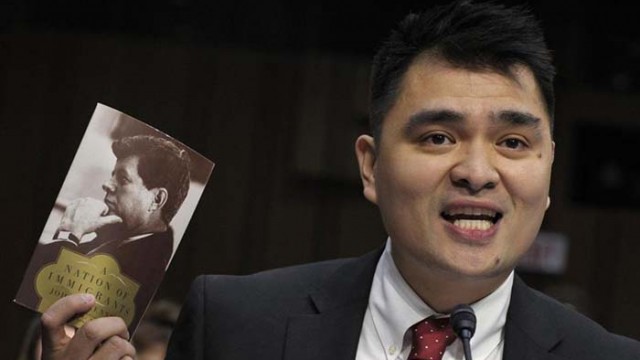 Journalist Jose Antonio Vargas recognizes himself as someone who loves the United States, wants to contribute to it, and calls America home. He said, however, that he is one of thousands of undocumented immigrants who are now waiting for their country to recognize them in return.

Vargas, who will speak at BC for the Winston Center for Leadership Ethics’ Chambers Lecture on Mar. 1, is a Pulitzer-Prize winning journalist and filmmaker.

“[In] the Winston Center, we’ve got these different lecture series,” Monetta Edwards, assistant director of the Winston Center and the Corcoran Real Estate Center, said. “For the Chambers Lectures, I’m trying to change the direction to where we focus on people who’ve faced adversity and overcome it and are working through it in their lives.”

In addition to being the founder of Define American—a non-profit media and culture organization aiming to increase the conversation about immigration and citizenship in America—Vargas is also the founder and editor of #EmergingUS, a digital magazine focused on race, immigration, and identity in a multicultural America.

“I just think he brings so much more than just the immigration topic and there’s so much more to him. […] He says he’s a Filipino gay undocumented immigrant, and that is his identity,” Edwards said. “That’s what he puts out there. And I just think that it was just very important for his message.”

Vargas also produced and directed a documentary called White People on MTV, which focused on what it means to be young and white in contemporary America.

“It’s really important to bring these people that come with different perspectives and are able to challenge us to get out of the little bubble that we live in, and so I hope that the Winston Center is contributing to the conversation in bringing in these speakers that can help in that knowledge and learning.”

Edwards said that Vargas is a good person to have visit because the college campus environment makes conversations about undocumented immigration more common. Vargas’ visit is about putting a face to the issue.

In the past, the Chambers Lecture Series has featured people like Carey Lohrenz, the first female fighter pilot in the U.S. Navy, and Lara Logan, chief foreign affairs correspondent for CBS.

“Because of the elections that are happening, the immigration aspect is going to be something he’s going to be talking about,” she said. “I mean, he’s definitely going to be drawing from all the debates, so it’s going to be very current. And he’s going to give us a narrative of his life and tell us who he is and why he considers himself American and why he has a right to be here.”

The question-and-answer portion of the lecture will allow the audience to interact with Vargas and actually involve and immerse itself in the conversation that these lectures aim to create within the BC community.

“At BC, we are trying to get a more diverse population and we have people coming in from all different parts of the country that are bringing different experiences,” Edwards said. “And I think that for us, for anybody, it’s important to hear about other people’s backgrounds and experiences to make you a more aware person.”

The Winston Center was created in 2006 and has focused, in the spirit of a true Jesuit education, on educating the whole person. The Winston Center focuses on three areas to fulfill this mission: speaking programs, student leadership and development programs, and research programs.

The Chambers Lecture Series, along with the Clough Colloquium, falls within the speaking programs category. The center is also responsible for on-campus programs like Lunch with a Leader, the Jenks Leadership Program, the Brennan Symposium, and the Ambassador Program.

“It’s really important to bring these people that come with different perspectives and are able to challenge us to get out of the little bubble that we live in, and so I hope that the Winston Center is contributing to the conversation in bringing in these speakers that can help in that knowledge and learning,” Edwards said.