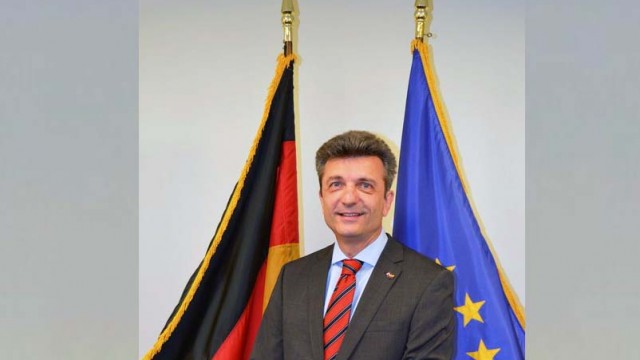 The German studies department will host Consul General Ralf Horlemann in a talk on the European refugee crisis on Mar. 3 at 3:30 p.m. in Devlin 101.

Horlemann will talk about the political and economical ramifications of the refugee migration into Germany, as well as the unprecedented number of refugees on a global scale.

“The refugee crisis that is transpiring across Eurasia and Northern Africa represents one of the gravest problems to face the globe today,” Alex Hawley, an International Studies major and MCAS ’16, said. “Estimates of refugees entering Germany’s borders last year exceed 1 million.”

According to the United Nations’ Office for the Coordination of Humanitarian Affairs, 13.5 million people are in need of humanitarian help as a result of the Syrian Civil War, and 6.6 million have been displaced from their homes.

This refugee problem has affected both Europe and the United States, where the refugee crisis has recently brought major political, social, and economic implications.

“Migration, including the flood of refugees escaping dangerous environments all over the earth, is an issue of global concern,” Rachel Freudenburg, a German studies professor, said. “However, it is of special importance to the USA, which is proud of its immigrant heritage—but which is currently struggling with that identity.”

Radical ideas on anti-immigration from presidential candidates, like Donald Trump, have attracted considerable attention during the 2016 election cycle.

Because America has a long-standing history with immigrants entering the country, it is worth understanding how immigration policy impacts all aspects of life. With Horlemann’s involvement, Hawley said, Boston College students are given the opportunity to discuss the rise of conservative views on immigration.

Given how Germany handled approximately 1 million refugees—the majority of which came from Syria—entering its borders in 2015, Horlemann will look to Germany as an example of how the U.S. should respond.

“Migration, including the flood of refugees escaping dangerous environments all over the earth, is an issue of global concern.”

Germany’s role in the refugee crisis, as Freudenburg noted, can serve as a sort of guide for the U.S. to see how its government handled displaced Syrians with unique solutions. Moreover, Horlemann’s expertise in this area can help make BC students more aware of the progressive solutions for the U.S. in dealing with this crisis.

“Dr. Horlemann is in a position to offer the Boston College community an opportunity to engage, profoundly and intellectually, in an educational conversation on this critical issue,” Freudenburg said.

Horlemann has served Germany’s foreign service for over two decades, during which he has accumulated vast experience in international affairs—including transatlantic relations, Asian affairs, and international security policy.

Between 1998-2002, Horlemann helped found the Berlin Center for International Peace Operations (ZIF), and from 2002-2005 he worked in the German embassy in Washington D.C., serving as counselor for transatlantic relations and Asian affairs.

Both Freudenburg and Hawley agreed that Horlemann’s presence can provoke an important and engaging discussion for BC students that leads to a greater awareness on the European refugee crisis and its impact on the U.S.

Featured Image Courtesy of Office of News and Public Affairs