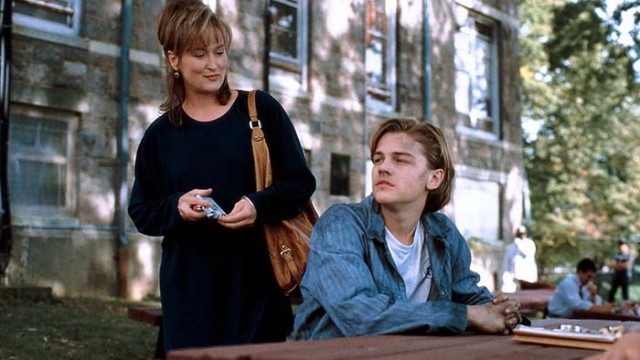 In most of the movies that Leonardo DiCaprio has starred in, he has plays these extremely exceptional characters. Every one of them, from plantation owner Monsieur Calvin J. Candie to doctor/lawyer/aviator impersonator Frank Abagnale, Jr., is larger than life. Whether he’s on Wall Street, somewhere in a billionaire’s dream, or sinking with the Titanic, it’s nearly impossible to describe the newly crowned Academy Award-winner as someone ordinary—somebody you could pass on the street and not even notice.

That is until you run into Hank, the obnoxious, conflicted, and angsty teenager DiCaprio plays in Marvin’s Room. Marvin’s Room came out right after Romeo + Juliet and right before Titanic shot DiCaprio off into unparalleled super-stardom. Sure, DiCaprio had worked with the likes of Johnny Depp and Gene Hackman before 1996, but Marvin’s Room was the first timeDiCaprio was included in the top-bill of an all-star cast. You’ve got Meryl Streep as his mother, Diane Keaton as his aunt, and Robert de Niro as a local physician looking after a few members of their family. Marvin’s Room might not be anything epic or awe-inspiring, but if any of DiCaprio’s roles should be labeled as genuine, it’s Marvin’s Room.

Hank’s not the best egg in the carton. He’s actually pretty rotten. The film opens with him burning down his mother’s house, yanking his brother out the front door, down the street, measly suitcase in hand. He gets caught and put in juvenile prison, since he’s still a minor. His mother Lee, played by Streep, is at her wit’s end. She’s just about to finish cosmetology school in an attempt to pull her life together in the wake of leaving her husband. Hank would much rather be with his father, and he’s sure to let Lee know that’s how he feels. Lee gets a call from her sister, who she hasn’t seen in 20 years—a sister, Bessie, who she left to take care of her father after he had suffered a stroke. Played by Keaton, Bessie has been diagnosed with leukemia and reaches out to her sister and nephews in a desperate attempt to find a bone-marrow donor.

If this all sounds a little heavy, that’s because it is. DiCaprio and Streep’s relationship is immediately stunning. She’s evidently afraid of him and afraid to lose him at the same time, unsure of how to approach his rebelliousness. He’s obviously looking for affection from a woman who is so rattled by her own life that she couldn’t possibly know how to show him love. Everything’s a mess. He’s supposed to be 16 and the two are smoking cigarettes together on the way down to Bessie’s in Florida. Every scene the two are in together is laced with this tense air that is never broken. It is only ever relieved by a brief glance shared between the two that shouts out to the viewer, “We’re trying.”

Meanwhile, Hank is taken aback by this aunt he has never met. She’s sweet, plainly dressed, and a bit older and more mild-mannered than his flaky and nerve-wracked mother. She shows him a compassion that he hasn’t experienced in his life, but he isn’t sure how to return it, at least at first. He’s just as rude to his Aunt Bessie as he is to his mother, but he slowly and surely learns not to treat this selfless, loving woman with same hostility.

Marvin’s Room isn’t an easy movie to settle in for. Things are grim for this broken family from the start and by the end, it doesn’t seem like there might be any relief headed their way. There is one thing, on the other hand, each of them learns from their experience—love isn’t easy. Sometimes it asks a person to give up his or her love to someone who desperately needs it—someone that may not be able to or know how to love him or her back.

It’s hard to compare Marvin’s Room to something like The Revenant. Marvin’s Room doesn’t have near the same production quality or aesthetic appeal. At the same time, though, it’s DiCaprio’s most relatable, honest performance. Isn’t that the kind of acting the Academy should be looking for?