Home » A Dream Within a Dream: How a Ride on the T Invigorated Me 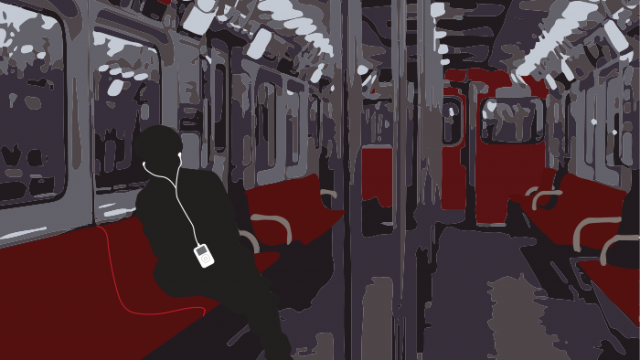 A Dream Within a Dream: How a Ride on the T Invigorated Me

Last week, as I rode the T, headphones-in-ears, music blasting, staring out the window on a seemingly never-ending ride from Park Street all the way to the BC stop, I dozed off and began to have a dream that had larger implications about my status quo in Boston.

From the parking lot, the gigantic structure rises up to the sky. The scorching sun warms the concrete walkway, which I can feel with every step. The recently opened gondola, visibly meandering up the mountain to an unknown destination, hovers over the vast valley one thousand feet above the tree line. Approaching the welcoming archway, the smoldering pavement begins claiming bits of rubber from my shoes.

A line of people stretches out through the arc and wraps around the corner. The constant chatter drowns out the sounds emanating from the nearby highway and the city beyond. The rustle and bustle of the metropolis subsides to the subtle murmur of the motorized cable of the structure; it mumbles on, as if wanting to say something, but never quite musters it out. People hobble forward as penguins and then stand still once more.

As I take my next step, I feel the whole world crumble, as if it has been tethering on the peak of a mountain waiting for the slightest push to veer over. As my breathing levels, the concoction crawls forward. First comes the light, emanating from every discernible direction. It fills the car and returns it its transparent quality. Automobiles go by beneath my feet, red, blue, white, gray, and black. The quiet serenity disappears as all of the sounds come rushing back: horns, sirens, and the screeching of brakes.

Climbing, I look around, the see-through glass is a portal into the new world all around me—familiar but eerie. The hill approaches and passes me by. The sounds shift now, from the complexity of the city into the simple chirping of the birds and silent whisper of the wind. Young trees sprout from of the earth with leaves just beginning to show the luscious green hue. The expansive mountain stretches out its arms on both sides, lost in the distance.

Ahead of me I can see the cable holding my life in the car: a thick steel rod that seems at risk of snapping, but never actually does. Another gondola car goes by in the opposite direction holding a young family. The mother and father sit on one side with their two young boys on the other, sharing a laugh at an unheard joke. As they pass me, another deflected ray of light hits the gondola, and I see the inside of my car once more. My brother is to my right with my mother in front of him. The seat in front of me remains empty.

I can see the station now, a large gray complex on the edge of the high mountain; before it is a wide valley thousands of feet wide. The gondola begins crossing it to reach its destination for what seems like an eternity. The trees below me seem even older than the ones I left behind, with their thick branches full of leaves. As I stare into the valley, it seems to stare back at me. In it, for a second, I see a destroyed gondola, distorted by its fall and bending in unnatural positions. I imagine it covered in red sandy rust with holes galore in the aluminum frame. But, as soon as the image pops into my head, it disappears. The station grows larger as we crawl toward it. I sigh; we are in the clouds now and the moisture fogs the glass. I cannot see anything anymore.

A vibration, the whole world shakes, and out of nowhere, the door props open.

I made it to my stop, but what did that mean? I like to think that it had been my journey in Boston up until now, a slow creep up a mountain whose summit I will eventually reach. But I need to let it go at its own pace and not rush things. If I try to force things instead of finding my place organically, I may, as Thoreau would say, come to find out that I had not lived.