Lacrosse Falls to Florida in First Meeting Between the Two

On a cool Friday night in March, Boston College women’s lacrosse traveled down to Gainesville, Fla. for the first time ever. Leaving the comfortable confines of Chestnut Hill after a short two-game home stand that featured wins against UMass and Navy, the Eagles went down south to play the University of Florida for the first time in program history at Dizney Stadium. The game was a test for BC (4-3, 0-2 Atlantic Coast), which has struggled against highly competitive teams this season. While the Eagles were undefeated in nonconference play heading into the matchup, the No. 2 Gators (8-0) showed why they are so highly ranked and exposed BC’s flaws to beat the Eagles 13-5. BC played Florida tough in the first half, but the wheels came off for the Eagles in the second, and the Florida offense made them pay.

The scoring began just over a minute into the game with a goal by BC’s Sarah Mannelly. Florida would respond a mere 20 seconds later, tying the score at 1-1. BC would score again on Caroline Margolis’ 14th goal of the season, but the Gators would then battle back again to tie the game. This seesaw affair continued, as Sam Apuzzo gave the Eagles the lead back and Florida’s Devon Schneider scored 23 seconds later while down a man to tie the game at 3-3. After Schneider’s short-handed goal, however, Florida’s offense went on a 4-0 run, giving it the lead at 6-3. Kate Weeks broke the 10-minute scoring drought for the Eagles with her ninth goal of the season, tightening the gap between the two teams at 6-4 heading into halftime.

The second half featured a total takeover by the Gators. After nine minutes of no scoring, Florida’s Sydney Pirreca broke the silence with her 10th goal of the season. The Gators added another goal 15 seconds later, setting the score to 8-4. Kayla O’Conner scored her eighth goal of the season with just over 20 minutes left in the game to finally get BC on the board for the half. O’Conner’s goal, however, was also the last goal of the game for the Eagles. Florida then went on a 5-0 run to end the game.

Eight different Gators scored on the Eagle defense, with three Florida players scoring two goals or more. For BC, all five goals came from different players. While the score might have been close at the half, BC’s inability to score in the second half ultimately doomed the Eagles. But Florida also dominated in major statistical categories. The Gators had more shots on goal, ground balls, and, most importantly, saves. Florida goalies Mary-Sean Wilcox and Haley Hicklen combined for seven saves on 12 shots, posting an above-.500 mark for the day. BC, on the other hand, was only able to make three saves on 16 shots.

For Florida, the win is its eighth straight. While they still have yet to play a conference game, the Gators look to be in midseason form, and are poised to make some noise when tournament season comes around. For BC, the loss is its first to come from non-conference play. The Eagles will need to regroup and refocus as they continue their Florida tour on Sunday. The focus for BC will most likely revolve around playing well toward the end of games and finishing strong. The Eagles played their best lacrosse in the first half, but tended to falter in the second. BC plays one more nonconference game against Stetson on its road tour through Florida, which will give the Eagles an opportunity to gain some momentum before returning home to resume ACC play. 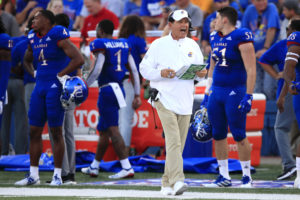