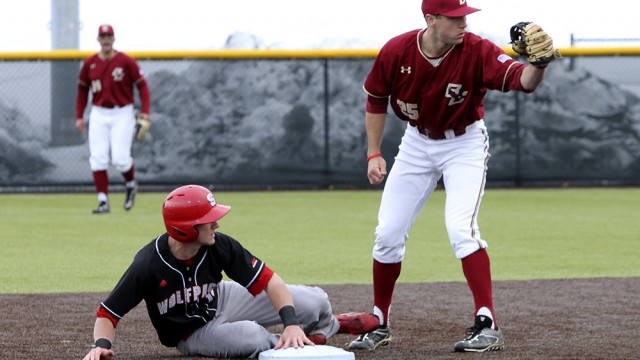 With two outs in the top of the ninth, Johnny Adams tried to steal second base. Getting him into scoring position would have given Boston College a better shot at picking up an insurance run, but he was gunned down by catcher Andrew Knizner, ending the inning and putting BC just three outs away from a win over No. 8 North Carolina State. In a tight 1-0 game, it was the perfect time to bring in a shutdown closer for three quick outs against the bottom of the order.

The only thing was, BC head coach Mike Gambino had already gone to Justin Dunn—his closer—four innings earlier. And once three straight men reached base to start the inning against a guy who shouldn’t have been on the mound for BC (12-3, 2-1 Atlantic Coast) on Sunday, it looked as though BC’s slim lead might be erased in a hurry.

After surviving a couple threats from NC State (13-4, 1-2) in the first four innings, freshman starter Jacob Stevens got himself into a little more trouble in the fifth. With a man on first and two outs, Stevens threw a wild pitch that got by catcher Nick Sciortino, then walked the next batter—his fifth of the day, to go along with five strikeouts. In a 0-0 game that didn’t show any sign of becoming a slugfest, Gambino knew exactly what he was going to do, even if he had his catcher buy a little time with a mound visit.

“We knew we were going to Justin,” Gambino said.

The coach came out to the mound and motioned with his right hand for his most-trusted reliever, the flame-thrower who consistently hits the upper-90s and generally comes out at the end of the game for the Eagles. While this type of pitcher in Major League ball is almost exclusively kept for the special “save situation,” a statistic that is one of the most overvalued in professional sports, Gambino believes in using his best reliever when he needs to. With Chance Shepard—a player who came into the weekend tied for second in the country with seven home runs—coming to the plate, he felt he needed Dunn.

His experiment worked. Dunn got Shepard to ground out to short, ending the frame and allowing BC to pick up a lead the next inning. This started with a base on balls for Jake Palomaki, who set BC’s all-time record for walks in a season during his rookie campaign last year. After Joe Cronin grounded out, the Eagles picked up three consecutive walks to get their sole run of the game.

Cody Beckman got NC State out of that jam, getting pinch-hitter Gian Martellini to line into a double play. He and Tommy DeJuneas combined to shut out the Eagles for the rest of the game, while Dunn stayed in after getting his out, allowing a few walks and a hit during three more innings, but getting a key double play in the eighth to keep NC State off the board.

This pitching dominance lasted all weekend long for BC, which allowed the Wolfpack to score a combined three runs in three games, all of which came on Saturday against Jesse Adams. The lefty made just one significant mistake: leaving a 1-1 pitch too far over the plate to Shepard, who drove a two-RBI double into the gap to give the Wolfpack its first and final lead of 3-2. Adams managed to recover enough to work into the fifth inning, when Brian Rapp came in to shut the door on a one-out jam. Dan Metzdorf and John Nicklas went on to face just seven batters to close out the final two innings, but a solid start from Brian Brown proved too much to overcome.

The only man to get to Brown on the day was Cronin, who blasted a two-run shot to left in the third. The captain, who’s hitting a team-best .389 through 15 games, also had the hottest bat the day before, going 2-for-3 with a triple, two walks, and three RBIs.

Those hits alone were far more than Mike King, another rising star in the ACC, needed on Friday. He went seven innings, surrendering just six hits and no walks, though with a pair of HBPs, on just 89 pitches. Bobby Skogsbergh needed nearly 40 pitches to get through the final two frames, but picked up four strikeouts to complete the shutout. Meanwhile, BC’s offense had blown the game wide open by taking advantage of the Wolfpack’s mistakes.

The first came in the fourth inning, when an error from NC State shortstop Joe Dunand eventually led to two BC runs. Another miscue from Dunand in the fifth—his third on the afternoon—along with a throwing error from starter Joe O’Donnell led to three BC runs. The final two tallies, the only earned runs in a 7-0 win for BC, were set up by a wild pitch and a four-pitch walk, putting runners in scoring position for Cronin to blast a triple to the gap and drive them home.

This big victory in game one not only gave BC a chance to win a series against a good top-10 team, but also allowed Gambino to stretch out Dunn in the finale. The coach feels comfortable allowing the former starter to go up around 50 pitches on a given night, a mark he just fell short of when he completed the eighth. Dunn also showed signs of fatigue throughout that frame, forcing Gambino to find a substitute closer.

Gambino elected to give the ball to Donovan Casey, a reliever who has not only pitched four scoreless innings so far this season, but has also started all but one game in the field, tallying a .321 average on the year. Against the first three batters he faced on Sunday, however, he allowed a single, another single, and a walk to load the bases.

“Going to Donovan Casey in that situation was a mistake on my part,” Gambino said afterward.

It’s not that Gambino doesn’t trust Casey in the late-inning role—the reliever has already picked up a save this season, and Gambino is adamant that Casey will continue to get those opportunities when Dunn isn’t available. But that time he spends as a field player can take its toll, and it did Sunday afternoon. The worst bruise came in the top of the eighth, when Casey took a hard-thrown pitch off his right shoulder.

“Going to him in that spot, with how much he had gotten beat up today, was the wrong move,” Gambino said.

The head coach then pulled Casey, inserting Nicklas into the worst possible situation for a pitcher—bases loaded, no outs, game on the line. In the cruel happenstance of baseball, the batter Knizner drove the second pitch to right, to the player who probably least wanted the ball: Casey, who Gambino had slotted back out in right field.

He made the play, firing the ball back in before the man at third could tag up. Gambino came back out again, this time bringing on Metzdorf, a freshman left-hander. Popped straight up, where Sciortino made the play in front of the plate.

That brought Gambino out one last time, bringing on Skogsbergh to face Shepard, the player most likely to blast one in the gap to end it.

Instead, he hit a grounder to the left side, where third baseman Gabe Hernandez ranged over to his left and fired to second to end it.

“Those guys bailed me out,” Gambino said. “And that was awesome.”

With the solid series win over a ranked ACC team, BC has made a significant move in the right direction for getting on the national radar. The squad picked up two points in the USA TODAY Sports baseball coaches poll last week, and will undoubtedly pick up more after getting two conference wins.

Yet, it’s not an easy road to getting (and staying) ranked—Clemson, the team just on the bubble last week and BC’s next ACC opponent, picked up 80 points. Another 25 teams behind the Tigers also had more than BC. Gambino, for one, knows how far the team still has to go.