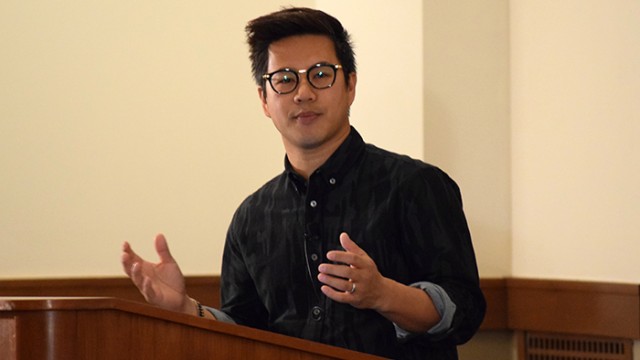 The second annual Advancing Research and Scholarship at Boston College day kicked off with a keynote from Google, Inc.’s Marvin Chow. As this year’s symposium of student, faculty, and alumni research focused on “big data,” it seemed appropriate that the mammoth of mass data collection—Google—would lead the way for any talk of digital information.

Chow, senior director of marketing at Google and BC ’95, talked about Google’s collection of lots of data, and how Google uses that data to make the world a better place.

-Marvin Chow, senior director of marketing at Google and BC ’95

According to Chow’s presentation, there’s so much information to process, yet so little—less than one percent—of this becomes useful to those who analyze data.

The key for tech companies like Google, explained Chow, has been to figure out how to use all of this data provided. Most people know Google as the premier search engine, but the question that Chow wanted to address was: how has Google harnessed our searches and uploads for our benefit?

Over the course of his keynote, Chow demonstrated several of the ambitious things that Google has done with all this data that it intakes on a daily basis.

One example Chow shared was Google Trends. Pulling statistics from its search engine data, Google can figure out what people are searching for most frequently on a given date. Chow humorously noted that searches for “hangover” and “vodka” spiked drastically on New Year’s Day.

Chow also discussed the predictive element behind Google Trends. Based on statistics from the New Hampshire primaries, Chow determined that the percentage of Google searches for each candidate nearly matched the percentage of votes that went to each of those candidates.

Similarly, Chow revealed that the day after Super Tuesday —in which Donald Trump was a big winner—the search numbers for “move to Canada” spiked.

The impact of using big data to create a program like Google Trends, according to Chow, is that it will lead to data journalism, which digs through a more refined database, which in turn means better stories that evolve out of that cross-collaboration. Journalists would be able to tell stories they couldn’t have before.

Chow also demonstrated how harnessing big data has helped solve human problems. A prime example of this is Google Photos. Rather than to try and find a photo via the “scroll of death” through hundreds of photos, as Chow dubbed it, Google Photos allows you to simply search for the photo you are trying to find, in what he called supervised machine learning.

Chow also spoke about how the development of the Google Car has used big data to create self-navigation. Stopping car accidents is the biggest problem that Google has attempted to solve yet.

“Why should human error lead to so many deaths each year?” Chow said.