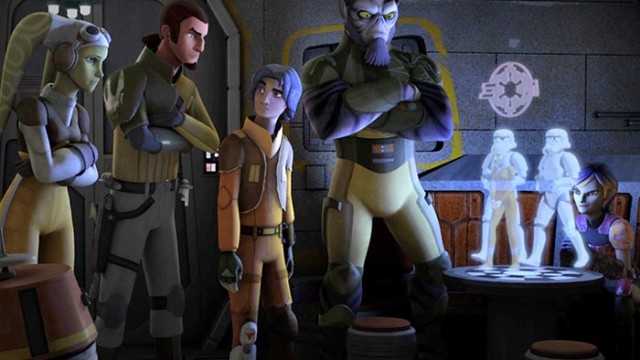 ‘Rebels’ Bring ‘Star Wars’ to the Outer Rim and Back Again

When Disney bought Star Wars back in 2012, it became clear that, at least in some ways, Star Wars would be getting a bit of a Disney makeover. Mickey Mouse started flaunting a Jedi robe at Disneyland, Darth Vader could be seen riding the Dumbo ride, and it was only a matter of time before the massive entertainment conglomerate started producing its own content aside from the episodic entries in the Star Wars film series. While at a first glance, Disney XD’s Star Wars: Rebels might seem dismissible to Star Wars fans for appearing on a children’s network, the animated series is chock full of memorable and substantive lore and stories that can very easily absorb the most “mature” fans’ interest.

Rebels takes place after Revenge of the Sith and before A New Hope, 14 years after the rise of the Galactic Empire. While the Empire is able to stamp out most instances of insurrection across the galaxy, a growing resistance movement is beginning to take hold in the Outer Rim. Kanen, a 30-something year-old Jedi, Hera, a Twi-lek pilot, Zeb, a beastly Lasat, Sabine, a Madalorian bounty hunter, Chopper, a comically heartless astromech droid, and Ezra, a young orphan training to become a Jedi under Kanen, make up a small band of rebels aiding the oppressed throughout the Outer-Rim. The Robin Hood-esque band joins with the up-and-coming Rebellion at the end of season one and spends most of the second season running various errands and missions for the cause.

What’s most notable about Rebels is the stunning and compelling character development that viewers have seen from and between members of the main team, aptly named Ghost Squadron. Ezra obviously struggles with the apparent death of his parents at the Empire’s hand, Zeb deals with the loss of his race in an Imperial occupation of his planet, and Kanen has to live with the burden of the destruction of the Jedi order and his master in the Clone Wars. Each character is sometimes given his own thematic episode, giving audiences an extended time to get to know each of these characters and to chart how they’ve grown since the beginning of the show. Ezra learns to cope with his parents’ death and to be mindful of the Force with Kanen’s help, Zeb helps colonize a new world for his race, and Kanen learns that he and Ezra are worthy inheritors of the Jedi legacy, despite his doubts. Generally, for a kid’s show, Rebels exhibits a deep, layered emphasis on character growth that makes Ghost Squadron relatable and charming.

When it comes to the action sequences and villains in the show, Rebels could use a bit of polishing. The animation can get a bit choppy when Ghost Squadron gets a firefight with stormtroopers and some of the scenarios the team escapes are quite ludicrous. The lightsaber battles, on the other hand, are actually executed very well. Kanen, Ezra, and the Imperial Inquisitors (basically Sith agents) they come up against are light on their feet, quick to strike, and go through their skirmishes with exceptional grace.

The Inquisitors are an interesting dynamic in Rebels. The show needs to have lightsaber-wielding villains. That’s sort of the crux of anything Star Wars—there need to be lightsaber battles. Inserting these Inquisitors in the program deals with that aspect of Rebels, but opens up a can of worms as to how Inquisitors fit into Star Wars mythos. There are only supposed to be two Sith, according to the films, so where these characters fit into that rule is an interesting and unanswered questioned that the show needs to address in the future.

There’re also a myriad guest appearances from characters in other Star Wars programs. Ahsoka Tano, Rex, and Hondo from the Clone Wars series are featured as recurring characters that bring about interesting character relationships with Ghost Squadron, while Darth Vader, Leia, and Lando Calrissian from the original film trilogy remind Rebels of what lies in the universe’s future and the possible mark Ghost Squadron has on major events in the original series.

A lot is at play and at stake in Disney XD’s Rebels, which might be surprising at first glance. Once sucked in, though, it’s easy to see why the show has already been renewed for a third season. Rebels has developed its own unique team of characters that stand their ground among some of the more famous members of the Star Wars cast. It exhibits the infinite stories that can be found in a galaxy far, far away.

star wars rebels
Dropkick Murphys, Battle of the Bands, and BCDE This Weekend in the Arts
Tattoos From Sketch to Skin