Home » Will Supple Conquers The Heights 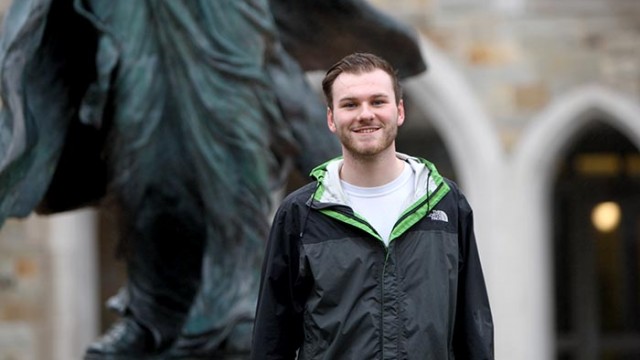 Will Supple Conquers The Heights

Facing an intimidating panel of Jesuit judges, Will Supple, MCAS ’19, and Colin Cross, MCAS ’19, strutted out into the glistening lights of Robsham Theater. There are a few whistles while the introductory applause slowly fades away, someone shouts out a hearty, “Yeah, Will!” and then the auditorium goes silent. Supple gives Cross a slight, quick nod, and Cross strums his richly coated, beautiful acoustic guitar. Cross plays his way through a couple progressions, then the bomb drops. Supple delivers the first few lines of Chris Stapleton’s “Tennessee Whiskey.” Listening to the thunderous applause that erupted after each verse or difficult note Supple faced, one might’ve thought The Beatles had just waltzed into Robsham. It becomes quickly apparent that Supple might just make it to the top of Boston College’s annual Sing it to the Heights.

For many freshmen coming to BC in the fall, the campus can be a difficult place to navigate and to gain one’s bearings. Especially when one lives on Newton, Main Campus can feel like a far-off kingdom, only reachable by the notorious Newton bus. This isn’t the case for singer Supple. For Supple, traversing the murky waters of collegiate living has been something of a breeze.

While many musicians here at BC can talk about how they’ve been performing at school recitals or have been taking singing lessons since they were five years old, Supple is actually quite new to his craft. “I’ve sung all my life, but I never tried singing publicly until senior year of high school,” Supple said. “I started to figure, since I sang so much in the car or say in the shower, that I might as well take it into a more public environment.” Supple started singing for his choir at his local Needham, Mass. high school. While he never performed solo at any of its events, Supple started to see how much he enjoyed performing and the people with which it brought him into contact.

Once he arrived at BC, Supple started searching for a cappella groups to join in the fall. Although there were a myriad of choices for him to browse through, Supple set his sights on The Bostonians and quickly found himself a spot in the group.

“Getting into the a cappella groups can be pretty difficult,” Supple said. “I sort of lucked out in finding The Bostonians and got accepted right away. You can audition for a bunch of the groups, but once you get called back for multiple groups, things can get messy. You might choose two groups out of three or four, but they have the last say, so it can sort of be a shot in the dark.”

Looking at BC’s a cappella scene, Supple made a couple points on the range of a cappella groups that can be found across campus. Supple felt that, while it was disappointing that some of BC’s voices might not have the opportunity to show the arts community their talent, he understood that having a jungle of a cappella groups on campus would be extremely overwhelming. Instead, Supple believes that niches of musically inclined students can be found all throughout campus. He himself has found one in Keyes. While Supple might have fallen into luck finding a group of students in Keyes who love to share its musical talents, tastes, and experiences, he feels that these sorts of groups are a pinnacle of the music community here at BC.

Working with The Bostonians, Supple has found friends and colleagues that speak highly of both Supple and his abilities. “He’s hilarious and one of the greatest people to have around,” fellow Bostonian Ben Stevens, CSOM ’18, said of Supple. “His falsetto is glorious, and he’s become a good friend of mine. His loyalty, honesty, and talent just sort of make you want to be around him.” When mentioning Supple’s name, the number of people who perk up, claiming they know the man himself and attesting to how personable he is, is astounding.

It’s not easy to put a tag on Supple’s style. His rendition of Stapleton’s “Tennessee Whiskey” suggests that Supple’s individual sound is a mix of grassy-blues and more classical soul. As Stevens suggests, his falsetto is spectacular and emblematic of Supple’s vocal range. It will be interesting to see Supple’s development as an individual singer, seeing as his first solo performance garnered him first place at Sing it to the Heights and its $300 cash prize.

The freshman year experience can be a tricky business. The future can often be clouded for many of the bright minds entering BC, and some might not have as great a grasp on their desires as they’d please. Will Supple, on the other hand, isn’t bogged down by the stresses of his year. Instead, he’s carving out his path at BC with his musical career, one performance at a time. 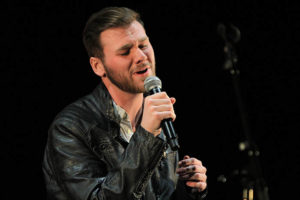